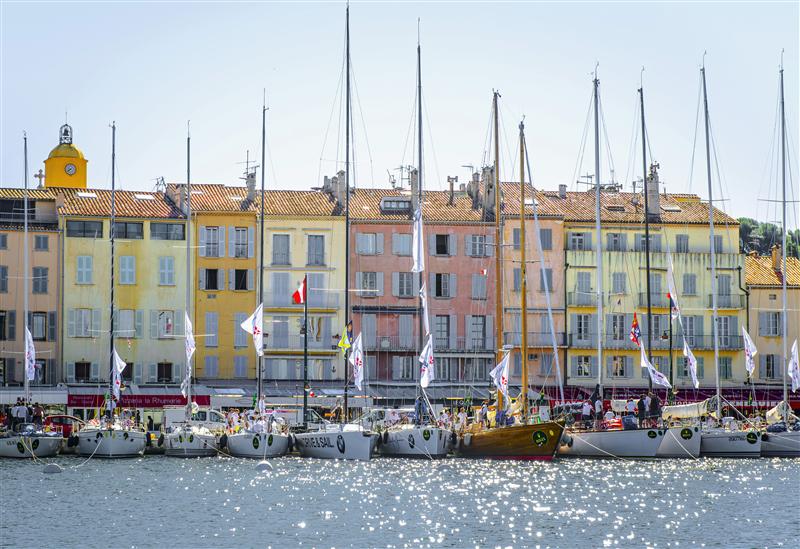 Its alluring light has inspired some of the world’s greatest painters from Paul Signac to Henri Matisse, and its association with screen icon Brigitte Bardot attracted the rich and famous to its quintessential Mediterranean setting. Saint-Tropez is a captivating place, a byword for sophistication and glamour. Thanks to its envious access to waters scenic and challenging in equal measure, the town is also synonymous with sailing. After all, any classic postcard view of the world famous Vieux Port juxtaposes the town’s magnificent sun-kissed buildings with an array of masts and sails. Sailing is again in vogue this week with the arrival of nearly two hundred international yachts competing in the Giraglia Rolex Cup – an event that celebrates its 60th edition this year. 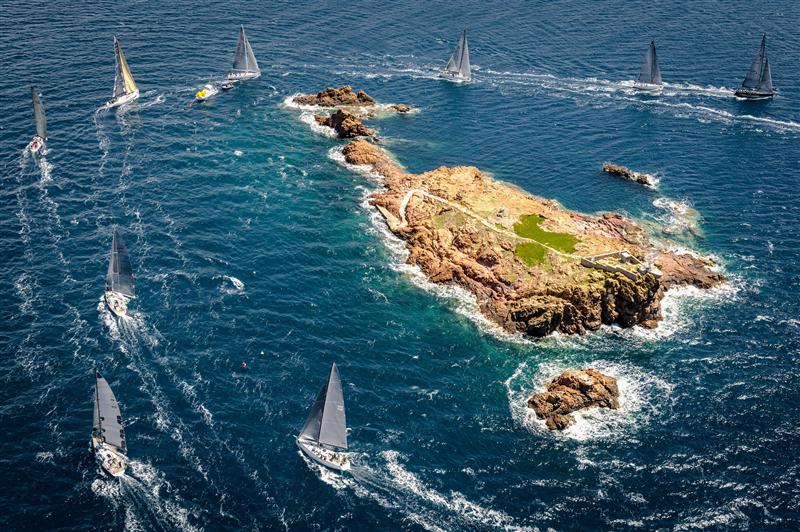 Queen of the Mediterranean

Over its fascinating history, the Giraglia Rolex Cup has departed from numerous ports in the French Riviera, including Cannes, Le Lavandou and Toulon, before making Saint-Tropez its permanent home in 1998. That same year Rolex began its association with the event, the second factor which helped a struggling giant to regain its appeal. This is a sensation echoed by Carlo Croce, President of co-organizers Yacht Club Italiano, who remarked: “The Giraglia has known highs and lows, including some difficult years. In 1998 the new event formula including three days of racing in Saint-Tropez before the long race, and above all, the collaboration of Rolex has given a strong push to the event. Since when it has enjoyed a constant growth and returned to become the undisputed Queen of the Mediterranean.”

The most significant part of the week’s sailing is the circa 242-nautical mile offshore race from Saint-Tropez to Sanremo, Italy, a town renowned for its annual music festival. The race was created in 1953, under the scope of establishing an offshore race in the Mediterranean and encouraging Franco-Italian camaraderie following the end of the Second World War. A relatively short but intense offshore challenge now awaits the crews, who must successfully navigate the event’s iconic landmark – the Giraglia rock, located one-nautical mile north of Corsica. Before embarking on the offshore race, the crews have enjoyed their time on the French Riviera sampling the two distinct sides of Saint-Tropez. Pulsating sailing has been offered by three days of boisterous inshore races whilst a window into Tropezienne hospitality was provided during the traditional Rolex crew party, held at the town’s 17th century Citadelle. 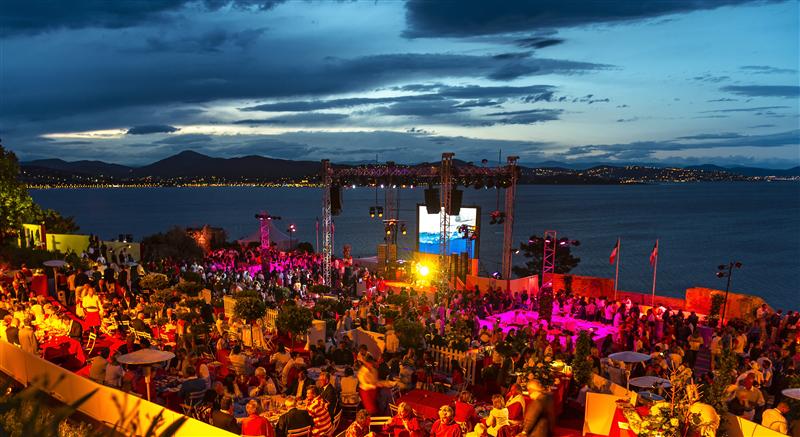 Saint-Tropez has a proud nautical pedigree and its host of sailing activities are largely organized by the Giraglia Rolex Cup co-organisers, La Société Nautique de Saint-Tropez (SNST), of which André Beaufils is President. After all, the town is a natural setting for sailing. “Saint-Tropez is a fishing port surrounded by water,” commences Beaufils. “We are fortunate to have the port in the town which lends a certain charm, attracting a great number of people from sailors to fans of the sport. The town is perfectly situated to welcome sailing boats.” Something it has done with passion for over 150 years.

The SNST is one of the oldest and most active yacht clubs in the Mediterranean. Indeed, the history of the SNST dates back to April 1866, when the participation of the “Regatta Society” was mentioned in the social programme for the inauguration of the statue of Bailli de Suffren, a famous Tropezian patriot whose monument stands in the port. In 1894 the then President, Martin de Roquebrune, lodged the articles of association for the club at the Saint- Tropez town hall and, in 1899, the newspaper Le Yacht officially announced the creation of the Société Nautique et Sportive de Saint-Tropez.

The SNST and Saint-Tropez enjoy hosting internationally-revered events like the Giraglia Rolex Cup and Les Voiles de Saint-Tropez as part of its impressive portfolio of activities. “The Giraglia Rolex Cup itself is a very fine event,” continues Beaufils, “and it has enjoyed a steady evolution over the last fifteen years, even if the offshore race has essentially remained the same. Such has been the growth in terms of the number of participants, that it would be difficult to accept any more!”

The annual Les Voiles de Saint-Tropez, hosted each autumn, is one of the most eye-catching and spectacular regattas in the world, regularly attracting thousands of spectators and in excess of 300 yachts – from intricate, lovingly-maintained classics to modern, carbon-fibre designs. Like other legendary regattas and races, Les Voiles de Saint-Tropez, formerly known as La Nioulargue, was born of a challenge between passionate sailors. In 1981, Jean Laurain the owner of the 12-Metre Ikra and American Dick Jason owner of a Swan 44, Pride, agreed to race between Saint-Tropez and the restaurant Club 55 at Pampelonne, using La Nioulargue navigation buoy as a turning mark. Ikra beat Pride and, following the enthusiastic embrace of Patrice de Colmont, the owner of the restaurant, the Club 55 Cup and La Nioulargue regatta were born. From humble beginnings, the event has involved into an international classic, thanks in no small part to the draw of Saint-Tropez. 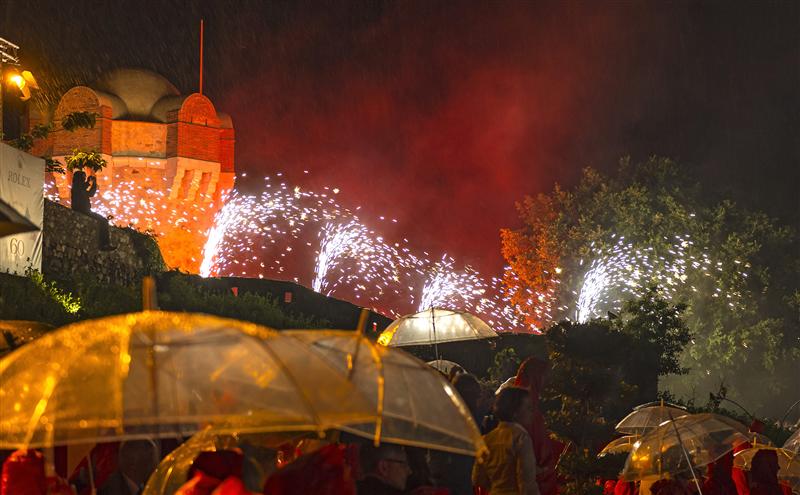 The historic status of the race and magnetic appeal of Saint-Tropez are a major draw for crews from across the world – both amateur and professional. “Saint Tropez is a big attraction of this event,” explains Sir Peter Ogden, owner of the 62-foot Mini Maxi Jethou (GBR). “It is one of those places: the town, the atmosphere, the way the harbour clears out with all of the boats. It is very pretty. From a sailing perspective, there is a lot of variety and fun.” Ogden and his crew come twice a year without fail: for the Giraglia Rolex Cup and September’s Les Voiles de Saint-Tropez. “This is the one event that ALL of the crew want to be at,” remarks Ogden. “Sometimes we have to rotate the crew but nobody wants to miss being here.” A view echoed by Jeremy Pilkington, owner of the Baltic 78 Lupa of London (ITA), competing here for the first time: “Saint-Tropez is a beautiful setting, a lovely town that I’ve known for a while. This is a historic race with some great associations and a fantastic fleet.”

Even for top professional sailors who have been there and done it, the lure of Saint-Tropez is huge. Italian Tommaso Chieffi is one such example, a former America’s Cup competitor who is now tactician on the Swan 60 Bronenosec (RUS). “It is enough to look around. Saint-Tropez is an appointment you cannot miss: the hospitality is brilliant and the great watching public make you feel like part of the community. Equally, the conditions here are testing, especially when, like this week, there is a Mistral…” Conditions that will prove especially testing for amateur sailors such as the crew on board the self-proclaimed ‘slowest boat’ of the Giraglia Rolex Cup fleet – Pietro Supparo’s Halberg-Rassy 41 Gianin 6 (ITA). Supparo reveals: “Coming to Saint-Tropez is always magnificent, the inshore races through the islands provide a perplexing beauty, wonderful scenery and fantastic conditions.”

For French crews in particular, Saint-Tropez has a deep-rooted association with their sailing heritage. Brothers Dominique and Michel Heyraud were surprise winners of the 2011 Giraglia Rolex Cup, navigating their evocatively named 37-ft Foxy Lady (FRA) to victory. Dominique begins: “Saint-Tropez provides a lot of memories from our childhood, and there are two periods of the year when I adore Saint-Tropez: during the Giraglia Rolex Cup and then Les Voiles de Saint-Tropez, because during these moments we rediscover an image of the town that reminds me of when I was younger – a port full of sailing boats and sailors rather than modern motor boats.” Michel is attracted by the sailing challenges posed by the Bay of Saint-Tropez. “For me it’s fantastic that the Giraglia starts from Saint-Tropez, it’s one of the most challenging places to sail in all of France.”

Saint-Tropez’s position as one of the world’s great sailing venues is undisputed. Few other places can rival what the town offers: an internationally-admired location, magnificent scenery, challenging waters, backed up by a historic and proactive yacht club and a relationship with so many prestigious and challenging events. The town’s yachting association with Rolex extends back to the mid-1990s and is something greatly appreciated by La Société Nautique de Saint-Tropez with whom Rolex enjoys a close relationship: “It is a pleasure and an honour working with Rolex, a partner that has really well understood the approach: serious on the water, festive on shore,” closes Beaufils.

“Saint-Tropez is an appointment you cannot miss: the hospitality is brilliant and the great watching public make you feel like part of the community.” Tommaso Chieffi, professional sailor