ISTANBUL (TUR) – Skipper Hagara and his crew be looking to build upon their early season successes in racing here against the top teams from Europe, New Zealand and Asia from May 25 to May 29, 2011 in the mouth of the golden horn, a natural harbor in the heart of Istanbul in front of the Galata Bridge. Among the teams competing are several America’s Cups syndicates Artemis, Alinghi and Emirates Team New Zealand. A crowd of 40,000 spectators is expected to watch the final races on Saturday and Sunday. Turkish television will  show live broadcasts of the races on Saturday and Sunday.

After the first two rounds in Muscat and Qingdao, Groupe Edmond de Rothschild is atop the leaderboard ahead of two America’s Cup teams: Luna Rossa and Emirates Team New Zealand. Right behind in an outstanding 4th place is Red Bull Extreme Sailing with Roman Hagara, Hans Peter Steinacher (both AUT), Will Howden (UK) and Craig Monk (NZL). America’s Cup winner Alinghi (SUI) is back in 6th place. “It’s going to be a really difficult challenge,” said Roman Hagara. “And not only because of the high level of the competition. It’s a tricky city venue with a lot of tall buildings that will have an influence on the winds. We were on the podium in Muscat and were close to winning in Qingdao. But after we capsized it took us too long to get back to full speed. We’re well prepared for Istanbul.”

A total of 11 international multihull teams with 44 of the world’s best sailors will be racing in Istanbul. Red Bull Bowman Craig Monk, who has been part of two America’s Cup winning teams, said: “Roman is the perfect skipper on board. He directs us well and the tactical skills of Hans Peter are impressive. It’s only a question of time before we get our first event victory.”

Starting on Wednesday 25th May there will be up to 6 races each day in Istanbul. The grand finale is set for Sunday. 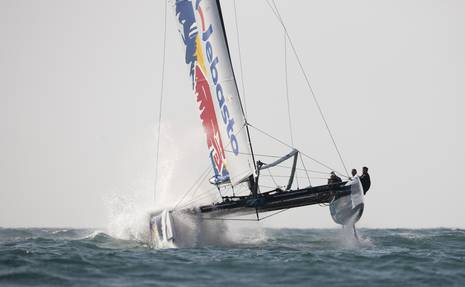