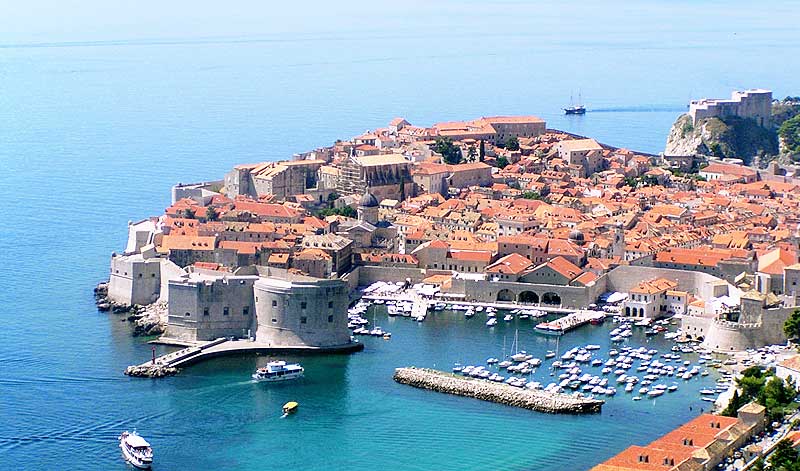 This stunning mediaeval city, that once rivalled Venice for power, has been a UNESCO World Heritage Site since 1979. It’s a fabulous cruising stopover, both as a destination in its own right and for the range and quality of yachting services on offer.

The dramatic and extensive mediaeval old town, with its two kilometre long heavily fortified walls was significantly damaged during a seven-month siege in 1991, following the fall of Yugoslavia. However it was quickly, yet expertly, rebuilt shortly after hostilities ended at a cost of around US$80 million. More than a decade on is again one of the jewels of the Adriatic.

It’s an idyllic traffic-free spot in which to unwind and while away time, whether browsing the world-class shops, simply enjoying a coffee, or relaxing over a leisurely meal at one of the many excellent restaurants. If possible it’s worth avoiding the city when cruise ships disembark their guests – the Old Town changes in character when flooded by thousands of extra tourists. But don’t worry – they never stay long and it quickly reverts to normal.

While yachts are not allowed in the small harbour in the old city, it may be possible to anchor just off the city walls and the main ACI marina is a short bus or taxi ride away in the suburbs. It’s also possible to anchor stern to in Gruz, the commercial port, beyond the ferry dock. This is the port of entry and is convenient for the town, but is noisy, with a main road adjacent and lacks decent amenities for visiting boats. Despite these drawbacks, this area has been designated as a marina, with prices to match.

The full service ACI marina, near the head of the 2-300m wide Rijeka Dubrova?ka inlet has more than 400 berths, including facilities for (pre-booked) superyachts of up to 60 metres in length. All berths have water and mains electricity, with connections of up to 125 amps available. Depths vary from 3-5m and a breakwater protects berths from the river’s currents.

Facilities for yachts include a chandlery shop, plus a boat yard with space for 110 yachts on shore, all types of maintenance and repair contractors and both 130 and 60 tonne Travel Lifts. Shoreside amenities include a small shopping mall, restaurant, cocktail bar, snack bar and a pub. There are also tennis courts, a football field with artificial grass, a children’s pirate ship playground, bowling ground and an outdoor swimming pool. Just outside the gate is a supermarket and there are excellent bus and taxi connections with the old town, which is just six kilometers away by road.