Abu Dhabi Ocean Racing clawed their way back into the Leg 7 lead on Saturday as the six-boat Volvo Ocean Race fleet fought to position themselves for what could be a leg deciding 24 hours, with light winds from a high pressure system slowing them down.

By 1300 UTC, Abu Dhbai had piulled out a 20-nautical mile lead which skipper Ian Walker put down to smart thinking from navigator Jules Salter.

“It’s been a great 24 hours for Azzam,” Walker said. “A big dilemma between sailing for the predicted right-hand shift and going left to get in the Gulf Stream created a big split in the fleet and lots of opportunity. This is exactly what we need as we can get away from the other boats and try to find something tactically. 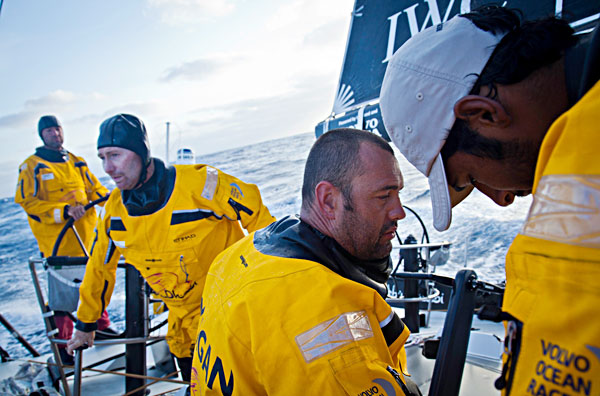 “Jules did a nice job as we initially tried to play the current but on finding it wasn’t as forecasted we decided to take the shift instead.”

Previous leaders CAMPER with Emirates Team New Zealand dropped to third when PUMA Ocean Racing powered by BERG edged past them after 24 hours of tacking.

Telefónica navigator Andrew Cape said the day could be the key turning point in the leg as the boat making the best of the increasingly unpredictable weather scenario would be first into fast downwind sailing and could get a huge jump on the fleet.

“The big decider will be today,” Cape said. “It all depends on how we end up this afternoon. Then we’re into some nice high speed sailing on the way to Lisbon.”

Despite dropping out of the top three in the last two days and struggling to make headway in light winds, Cape said Telefónica still had everything to play for.

“Right now we’re on a down,” he said. “We’re totally stopped in a high pressure system today. It will be very variable and there’s lots of snakes and ladders.

“We’ll just have to see who comes out if it the best. Roll the dice and see what happens.”

Telefónica have a seven-point lead over Groupama, with CAMPER and PUMA poised 13 and 14 points off the pace, respectively, in what is a four-way battle for the overall title, with three legs to complete.

Groupama watch captain Damian Foxall said conditions were getting lighter as the French crew skirted the edge of the high pressure system using the Gulf Stream current to help them.

“Yesterday, we had 22 knots, now we are now sailing with the code zero (head sail) up in 10 knots of wind,” Foxall said.

“We are following the Gulf Stream, which gives us a good one and a half or two knots push. It isn’t that wide and we have got to tack every couple of hours – just enough not to disturb the watch system.”

Foxall said the more traditional Atlantic crossing experience should begin as early as tonight, with fast downwind conditions offering up what could be the last chance for a crack at the monohull 24 hour distance world record of 596.6 nm nm set by Ericsson 4 on Leg 1 of the 2008-09 edition of the race.

“We are almost half way to Lisbon and didn’t see much of that yet, so everyone is looking forward to it.

“The North Atlantic may be our last chance to beat the 24 hours record,” Foxall said. “This usually is a leg where the boats get fast and furious with a lot of downwind and reaching sailing. Downwind sailing should start tonight or tomorrow.”

Foxall said he was hoping the vagaries of the high pressure system would serve up a chance for Groupama to get back in the scrap for the lead before the fast sailing began.

“The high pressure will surely change the fleet positions, so we are hoping for a little gift,” he said. “We will get closer from the leaders before the start of a three to four day drag race, which could favour our boat. “

At 1300 UTC, sixth placed Team Sanya were 84 nm off the lead, still in touch with the five latest generation boats, and with the option to play a wildcard by breaking away from the fleet in a do or die attempt at a podium position.

Navigator Aksel Magdahl said as the only early generation boat in the fleet they might be more prepared to take risks than the rest, but after staying with the pack so far by making smart decisions, they were wary of making too bold a call.

“The opportunities we’ve seized so far have proven to be the right ones and obviously that’s what we want to keep doing,” Magdahl said.

“One opportunity would be to head north and hope that high is not exactly as expected, but I don’t have any information about it right now. It’s definitely something we’re looking at.

“We need to try to catch the leading boats in the next 24 hours, otherwise the next option will be closer to Lisbon with a high pressure ridge there.”

Latest estimates suggest the leading boats will arrive in Lisbon, Portugal on May 31.