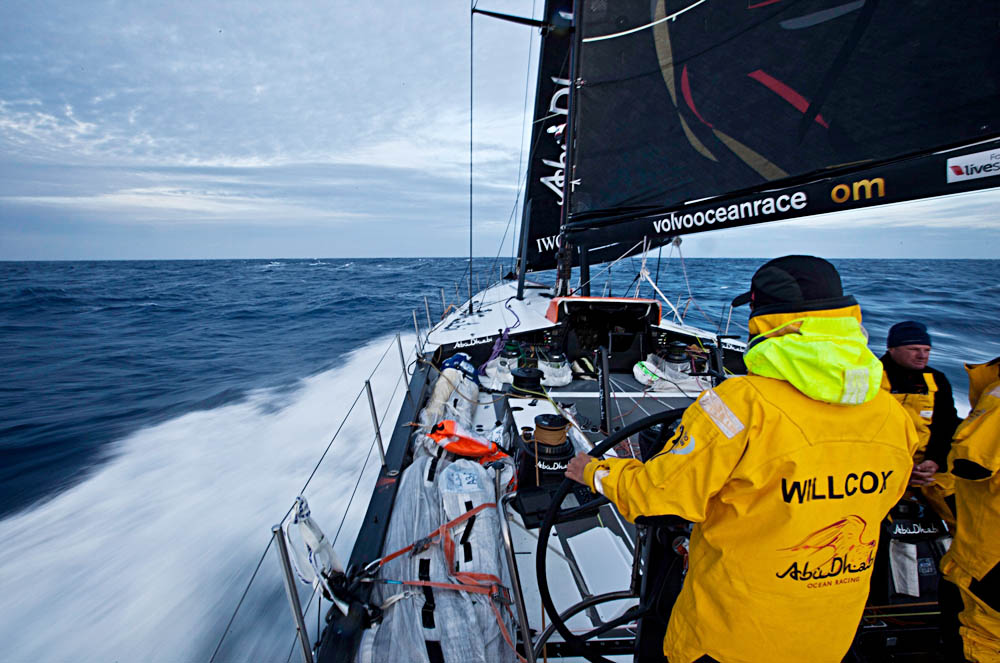 Cutting corners and playing squalls are just some of the games in play as PUMA try to climb the Brazilian coast faster than leg leaders Groupama and put distance on Telefónica, who have suspended racing to effect repairs.

Groupama sailing team’s lead has slowly whittled down from more than 50 nautical miles at 0700 UTC to 29 at 1300 UTC on Saturday as Ken Read’s PUMA Ocean Racing powered by BERG ramped up their attack on the leaders.

PUMA navigator Tom Addis said his team were making a comeback after earlier paying a high price for cutting the corner through Estrecho de le Maire, a strait between Argentina and Isla de los Estados, where a cold front smothered their breeze.

PUMA dropped from 15 nm behind Groupama to more than 50 nm in six hours. However, the tables have since turned on Groupama and their speeds have dropped to more than two knots less than PUMA as they too fall foul of the front.

“We had a really nice approach into Cape Horn,” Addis said. “We gained a lot back on them, then we lost it all in this last little front. But they should have a tough time ahead. There will be opportunities, that’s for sure.

“There are going to be a few park-ups in this next section, and any time there are park-ups and transitions from one breeze to another there are opportunities.”

Groupama skipper Franck Cammas said the game had changed entirely since the teams rounded Cape Horn yesterday. Cammas said the weather was increasingly unstable and opportunities for gains and losses were aplenty.

The French skipper said he was certain their lead was not guaranteed, and his team would remain on high alert.

“It looks extremely complicated ahead,’’ he said. “It’s a place where the weather and the weather predictions are very changeable. It’s difficult to plan. We will have to use the wind we have without looking too far ahead.

“In the last few hours we have dropped from 30 to six knots. I have no idea how it’s going to pan out. The leg surely will be decided on this part, which is a very unpredictable part.”

Meanwhile, Team Telefónica suspended racing at 0427 UTC and are now working to repair structural damage at Martial Creek, a cove in Herschel Island in the Cabo de Hornos National Park.

Technical chief Horacio Carabelli is overseeing the repairs, which the team hopes to complete in time to allow them to resume racing after 12 hours of suspension.

Boat captain Pepe Ribes said that over the past six days the team had established a work system of 12 hours on and four hours off to allow members of the crew to stabilise the structural damage.

Ribes said the team had consulted with the boat’s builder and Carabelli, and were preparing for a quick repair and a hasty return to racing.

CAMPER with Emirates Team New Zealand are now within 900 nm of Puerto Montt in Chile, where their shore crew are awaiting to begin repairing their structural damage. Abu Dhabi Ocean Racing are continuing to monitor damage to their bulkhead and assess their options.

“The dream option is to do a good enough repair that we feel like we can carry on to Cape Horn,” he said. “The second best is maybe to retire from the leg, go through the Straits of Magellan, cut the corner and get to Itajaí as fast as we can. The third option is to go to the same port as CAMPER and do the full repair there and assess.

“There are lots of options, we just have to see how the repair goes, how the weather evolves, and in the mean time, we’re crossing off 300 miles a day towards Chile.”