The final 1,000 nautical mile stretch of Leg 4 of the Volvo Ocean Race to Auckland is proving to be a see-saw ride with small gains and miserable losses spreading right across the five boats chasing clear leaders Groupama. Although the runway to the Auckland finish is becoming shorter by the minute and while there seems to be no stopping the French at present, Groupama 4’s skipper Franck Cammas is cautious.

“It’s far from being a highway until the finish line,” he remarked. “In two days’ time we will have to deal with a transition to light airs and we will be upwind for 400 miles until the north of New Zealand.”

At 1600 UTC today, Groupama 4 were over 130 nm ahead of PUMA Ocean Racing powered by BERG (Ken Read/USA) who had suffered in a light wind patch and lost 23 miles. With uncertain forecasts ahead, the race is now to North Cape at the northern tip of New Zealand’s North Island and it is hard for the crews to think beyond that, such is the intensity in the fleet. 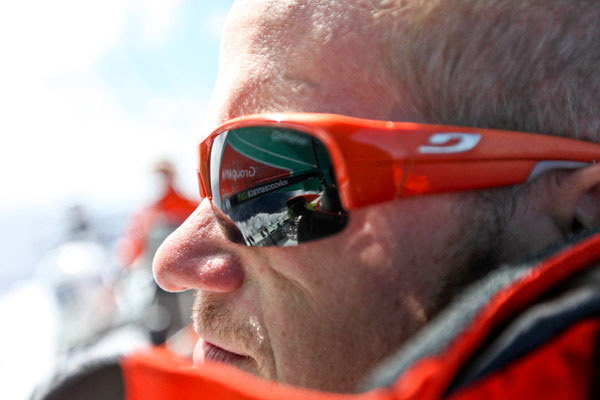 Groupama’s substantial lead places the French team in a different weather pattern from the chasing five teams, which could have its disadvantages. “Being in front, we might enter a light wind area while the boats behind would come back,” said Cammas. “We will have to make the most out of our 100-mile lead.”

Meanwhile, PUMA are concentrating on holding off the challenge of Team Telefónica (Iker Martínez/ESP) — winners of the first three legs — and CAMPER with Emirates Team New Zealand (Chris Nicholson/AUS), sailing with seven New Zealanders all anxious to be first into their home port.

“There’s not much chance of catching Groupama in the near future,” said PUMA watch captain Tony Mutter. “They are over 100 nm straight ahead. We hope there is a parking lot, but at the moment, they’re in a very strong position. We have 80 per cent of our focus on Telefónica and CAMPER and the other 20 per cent is on the last section and maybe being able to pounce on first place.”

“I think they [Abu Dhabi] will definitely close in,” Oxley said. “There is so much separation between us and it seems like we’re ahead, but we’re only just gaining a bit of bearing on them. I think it will end up being pretty close.”

At 1900 UTC today, Groupama had extended their lead further. They are now 138.20 nm ahead of PUMA who lost three nautical miles in the last three hours. PUMA were the only losers, with the rest of the fleet making small gains, though the split is now wide. CAMPER and Abu Dhabi are over 200 nm behind, and Team Sanya are languishing 393 nm in arrears.

After a night when it was possible to see Venus and Mars as well as the Southern Cross, another day of gains and losses dawns for the fleet as they press on towards North Cape.