This afternoon Telefónica (Iker Martínez/ESP) moved up to second place on the Leg 4 leader board as Groupama 4 continued to dominate. The fleet is racing towards Cape Reinga, the turning point at the northern tip of New Zealand’s North Island, which lies 437 nautical miles ahead of Groupama.

Will Oxley, navigator with fourth placed CAMPER with Emirates Team New Zealand (Chris Nicholson/AUS) explains that the low pressure system situated to the east of the fleet has a light patch associated with it. For CAMPER to try to avoid it would mean putting the bow down and extending the beat up to the cape by over 100 nm. “We’re all going to roll into this light wind zone and throw the dice and see what happens,” Oxley said.

Earlier, at 1300 UTC, Iker Martínez and his men gained six nm and deposed the beleaguered PUMA Ocean Racing powered by BERG (Ken Read/USA) who had lost 30 nm in the previous three hours. 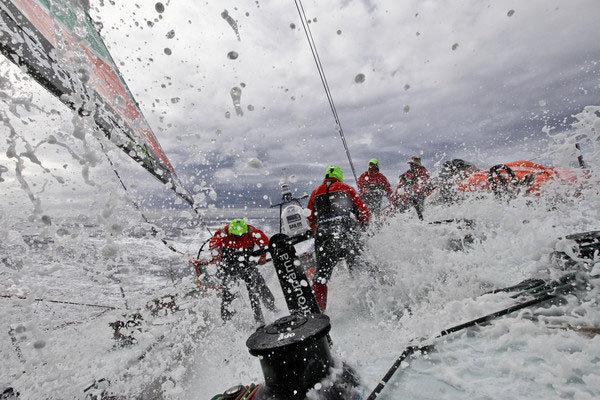 On the eastern side of the course, PUMA have been feeling the full effects of the light wind zone and had yet another night of struggling with heavy rainsqualls with little or no wind under them, resulting in their massive loss today. “It hasn’t been very favourable for us,” remarked helmsman Kelvin Harrap.

The larger squalls are visible on the radar if they have some sort of precipitation within them, which helps the team to avoid them, but they are now in third place and 27 nm behind Telefónica.

Media crew member Amory Ross said in an interview tonight: “It’s a big shame. We have ‘cabin fever’ as it is, but to have 6,000 nm worth of sailing come down to a few bad clouds is hard. Everyone is feeling it and you can see in their faces and hear it in their voices. We are all pretty disappointed right now.”

Groupama too have suffered squalls, but they were coupled with a lot more wind and better angles than the crew had anticipated. Although Oxley thinks Groupama will escape unscathed the French team’s helmsman Phil Harmer said today that they too have had their share of tough moments.

“Everyone is quite tired and exhausted,” he said. “We’ve been hanging onto this lead for 18 days or so. Everyone has been sailing really hard to keep this lead, which is what we have done. Now it’s getting a bit stressful because we know the guys behind are going to catch us a little bit, so everyone is hoping and praying they don’t catch us too much before we get to Auckland.”

As Groupama hardened up onto the wind, the chasing pack had all made gains on them at 1900 UTC tonight as their speed began to slow, causing their leading margin to be whittled away to 127 nm. Telefónica (Iker Martínez/ESP) came screaming up behind on a broad reach averaging 19.3 knots and gaining 22 nm, 27 nm ahead of PUMA now in third place. 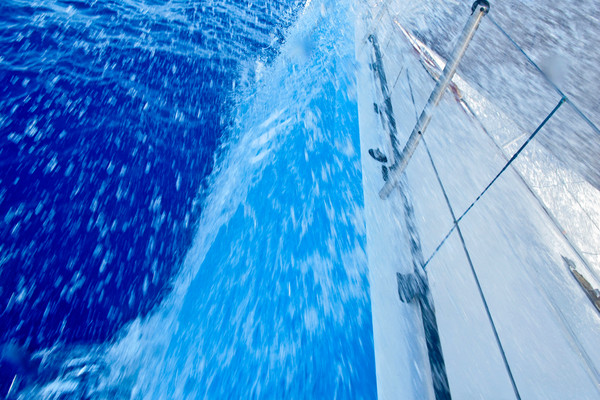 Both Abu Dhabi Ocean Racing (Ian Walker/GBR) and Team Sanya (Mike Sanderson/NZL) were also on the pace, both boats making substantial gains and finally averaging high speeds, although they are over 300 nm astern of the leg leader.