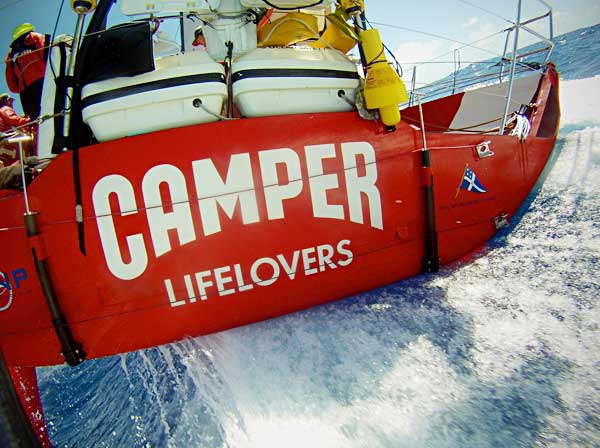 An unexpected wind shift has split the fleet in two and opened up opportunities for the boats on the fleet’s western flank as they take on a tricky passage through the sparsely charted waters of the Solomon Islands.

As the western trio Team Telefónica, CAMPER and Team Sanya all line up to pass through the middle of the huge archipelago, second placed PUMA Ocean Racing powered by BERG skipper Ken Read says he can hardly believe way the final 2000 nautical miles of Leg 4 are playing out. 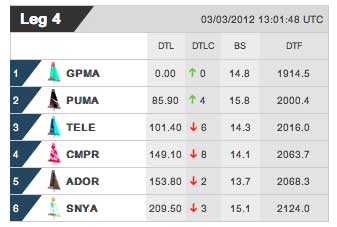 “There are three of us here and three of us there,” Read said. “It’s amazing, a few days ago I would have said you’d be crazy to go through those gaps, but now there are three boats doing it and it might even work, too.”

Read’s navigator Tom Addis agreed that none of the teams planned a Solomon Islands crossing at the start of the leg but said the move had become the only option for the western boats after the wind shifted to the right over the past 24 hours.

“It’s not completely unexpected based on where they were located, stuck in the west there, but I am sure it wasn’t anyone’s Plan A to go through there when we left Sanya,” Addis said.

“If they came up to our line they would have to consolidate a pretty major loss just to get up to us,” he explained. “So it’s their best option to go through that passage and try to get up to us at some later stage — which could still work out for them.”

Addis said any passage through the relatively uncharted islands was likely to be a tricky one — particularly at night.

“They are going to be going through it at night — certainly Telefónica and CAMPER — and it’s not lit like we are used to with lighthouses and channel markers. But they will have charts of the area and they will just have to deal with it. 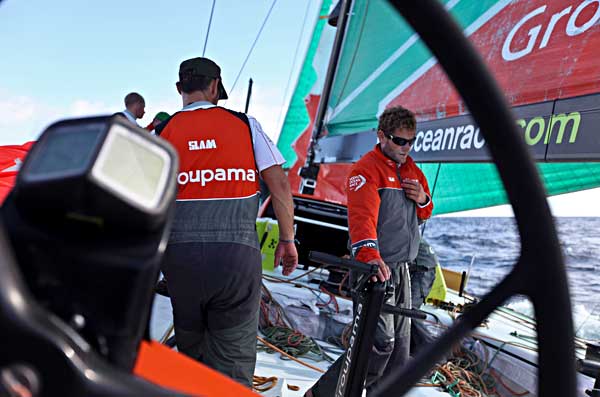 “We’ve got our issues to face breeze-wise too so I am not really sure how it is going to play out,” Addis admitted.

On Telefónica skipper Iker Martínez convened a special meeting of the crew to weigh up their options before deciding on the island gamble which could open an opportunity for big gains for the Spanish team.

“The third leg was tricky in terms of the meteorology, but this leg is proving to be even more unpredictable,” Martínez said.

“A few days ago we were convinced we didn’t have many chances open to us and it would be a pure horse race down to New Zealand.”

On CAMPER with Emirates Team New Zealand, navigator Will Oxley confirmed Chris Nicholson’s crew had now made their mind up to go for the gap between the islands of Santa Isabel and Choiseul.

“There are no half measures now,“ Oxley said. “Having made the decision to go through the Solomon Islands and a westerly option through the Coral sea, we now have to tough it out and stick to our guns to the end game in about seven days time as we approach the top of New Zealand and see how it plays out.”

Leg leader Franck Cammas on Groupama sailing team said this latest development presented the French team with additional risk as the fleet headed into the Doldrums.

“Of course we would prefer them to be aligned in our axis behind us,” Cammas confessed. “In uncertain areas like the Doldrums it’s very risky to have boats to one side like this with different weather.

“They already did 12 very fast hours. It was a good move. They were obliged to do it because of their position but it could be a very, very good shortcut for them.

“It could even be a winning one if they get a different wind than us. OK, they might get wind shadows between the islands, but they can get acceleration too. We will have lulls too because of the wind system here.

“For a boat, who is attacking, it’s a very beautiful option,” Cammas concluded.

At 1300 UTC today, leg leaders Groupama in the east had an 86 nautical mile (nm) advantage over second placed PUMA, while further west third placed Telefónica were a another 17 nm off the lead.