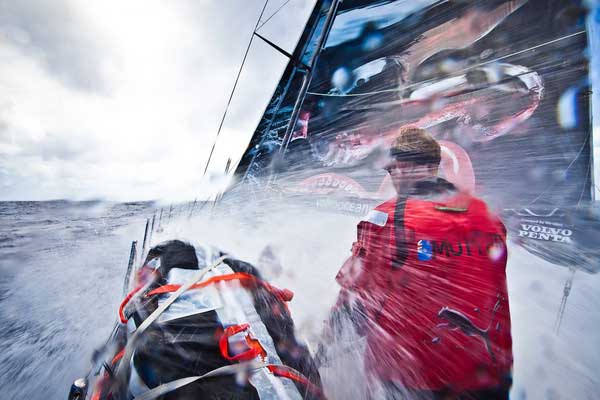 “Finally it feels like the Volvo Ocean Race. No more drifting around or upwind sailing – just raw power, soaking decks and high speeds,” described Ian Walker, skipper of Abu Dhabi Ocean Racing.  As the six boat Volvo fleet surges south, clicking off the miles towards the Auckland finish, the sailing is nothing short of sensational.

Everyone is lined up in their east/west positions now, with the throttle fully down, averaging speeds in the 20s and proving that these boats are so fast it was worth sailing the extra distance for the past 10 days to set up the right angle for the northeast trade winds.

“The boat feels very manageable, but does have that ‘runaway train’ feel about it,” Walker said as the boat hit speeds between 18 and 30 knots.

“This about as good as it gets,” said Walker’s navigator, Jules Salter. “Soak it in and rest up fellas,” he told the crew of Azzam, “it won’t be like this forever and it looks like it will be a tight finish with more upwind,” he warned.

With around 1100 nautical miles (nm) to the equator for leading boat Groupama 4 (Franck Cammas/FRA), temperatures are rising, but with torrents of water firehosing over the bow, no one is complaining. The boats are in ‘super-stack’ mode with everything that is not tied down jammed in the back windward corner of the boat and as far outboard as possible, while adjusting the fore and aft trim to find the right balance is an on-going affair for the on watch crew. 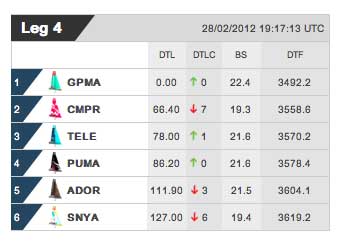 “You almost feel weightless when doing a sail change on the bow. The wave it puts over the deck is insanely powerful. You can’t see a thing, you’re basically working from memory,” says Assam’s bowman, Justin Slattery.

While five of the boats scream down the track, Team Sanya, who has been right in the hunt up until today, is struggling now. “It’s no great surprise, but it is with some sadness we see on the reports that we are averaging a knot slower than the new boats now that we are reaching,” said skipper Mike Sanderson. 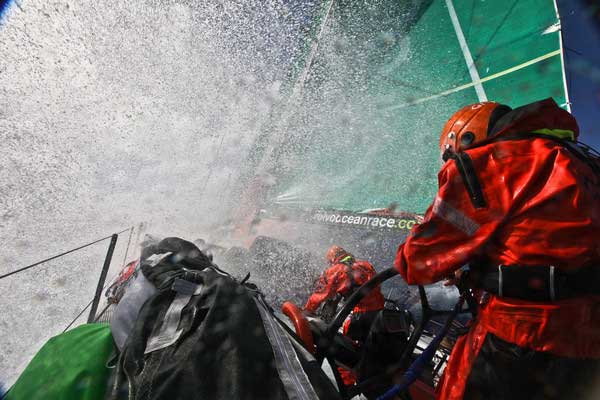 At 1900 UTC tonight, Groupama 4 had extended her lead over CAMPER with Emirates Team New Zealand (Chris Nicholson/AUS) to 66.4 nm. PUMA Ocean Racing powered by BERG (Ken Read/USA), in fourth place was 243 nm east of Telefónica (Iker Martínez/ESP) in third, and both Abu Dhabi Ocean Racing and Team Sanya had lost ground to Groupama 4.

All is set for a wild ride tonight.