PUMA Ocean Racing powered by BERG are today fighting to hold on to third position after a series of windless rain clouds slowed Ken Read’s team dramatically over the past 24 hours allowing Iker Martínez’s Team Telefónica to squeeze into second place.

At 1300 UTC PUMA had dropped 30 nautical miles on leaders Groupama in three hours and fallen behind Telefónica by 15 nm. CAMPER also closed in on PUMA, trailing just 48 nm in their wake.

While PUMA struggled Franck Cammas’ Groupama sailing team appeared unable to put a foot wrong and at 1300 UTC they had extended their lead to 150 nm.

Having been stymied twice yesterday by massive rain clouds that reduced the wind and PUMA’s boat speed to almost zero at around 1000 UTC, yet another huge cloud dealt Read’s crew a third body blow. 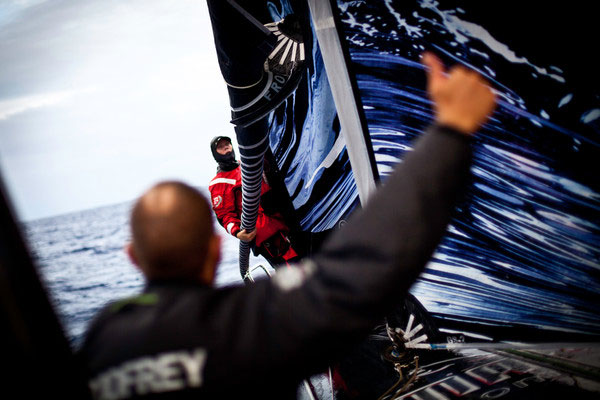 “We just ran into another big cloud with no wind so we’re parked up,” said PUMA helmsman Kelvin Harrap. “It’s not great. We’ve been on the eastern side of the fleet and we’ve picked up more clouds so it hasn’t been very favorable for us.

“We are trying to pass them the best we can using the radar and sailing around the ones we see. Right now we’re in the middle of a bad one, which seems to like us more than any of the others.”

Harrap said the PUMA crew was unsure why they had suffered more than the rest of the fleet but were hoping for better luck as they tried to hold off Chris Nicholson’s fourth place CAMPER with Emirates Team New Zealand.

“Right now we are just trying to keep the boat moving and sail towards some clear sky,” he said. “We are excepting some fresh upwind sailing in the next few days and we are trying to decide how to position ourselves in relation to Telefónica and CAMPER.

“We will see what happens in the next 24 hours and how it’s going to pan out.”