PUMA Ocean Racing powered by BERG won an epic battle for second place on Leg 4 of the Volvo Ocean Race on Sunday, clinching the runner’s up spot on a rainy morning in Auckland to complete a memorable comeback and secure their first offshore podium place in 2011-12.

Team Telefónica followed them in just under 50 minutes later for third after holding off CAMPER with Emirates Team New Zealand in a scrap that continued gybe-for-gybe all the way to the finish line.

Just around 93 seconds separated Telefónica, winners of the first three legs, and CAMPER — a tiny margin after a leg that took the teams over 5,220 nautical miles from Sanya in China to the sailing-mad city of Auckland in New Zealand. 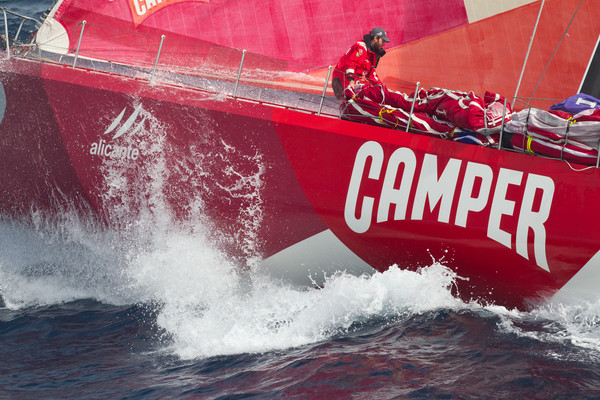 Abu Dhabi Ocean Racing came in just under 34 minutes later for fifth, with Team Sanya the sixth boat in just over 35 minutes after that.

“I don’t really know what we could have done better to improve our position,” said Abu Dhabi skipper Ian Walker. “We got up to third place at one point. It was disappointing to finish fifth and now it’s time for some downwind sailing.”

Thousands of fans jammed into spectator craft to welcome the boats in and thousands more packed Auckland Viaduct Harbour after a drag race through the churning water completed a fantastic set of arrivals to mark the race’s return to the city after a gap of 10 years.

“My God, I feel good to be in Auckland,” said PUMA’s American skipper Ken Read after the team had received a traditional Maori welcome into the harbour.

“From day one of this leg, ever since we sailed into the South China Sea, it’s been tough. I know that’s what we signed up for but man this was a challenging leg. This result is something we can build on. We just wish we had a couple more weeks to hang around in Auckland.”

While Groupama sailing team were making a triumphant entry into the City of Sails on Saturday night, PUMA were nursing a slim advantage over the pack, with just 40 nautical miles separating the five boats as a tense, tactical race for the best way to play the currents and to avoid wind holes raged through the night. 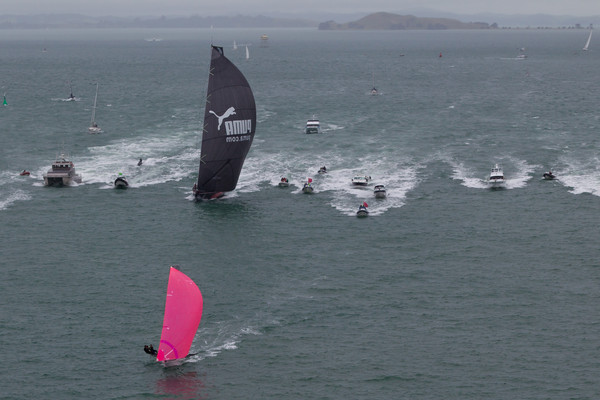 PUMA managed to protect their lead, coming in at 10:33:47 UTC for a total elapsed time of 20 days 3 hours 57 minutes over the two stages of Leg 4, which began back on February 19 in Sanya, China with a short race around the bay and a delay to keep the fleet from the worst of the conditions in the South China Sea.

Telefónica now lead the overall standings with 121 points despite losing their perfect record offshore. Groupama have 103 points and take over second place from CAMPER, now back in third on 98, with PUMA fourth on 78.

“It’s a really good result,” said Telefónica skipper Iker Martínez. “The level is so high that to get on the podium is very difficult. The teams are so strong.”

CAMPER skipper Chris Nicholson was not too downhearted after just failing to overtake Telefónica in a race that was as close as their run in to the finish in the Maldives on Leg 2.

“It was a really close race but we just ran out of runway at the end,” said Nicholson, whose CAMPER team count Auckland as one of their two base ports. “It was the toughest leg so far. Now we’re really tired and we’re just looking forward to being home.”

Sunday’s result confirms that PUMA are back in business after the broken mast that saw them forced to retire from Leg 1, and gave them little time to prepare for Leg 2.

Second place into Auckland marks their first podium finish in an offshore leg and it came courtesy of a terrific comeback.

They started the leg with a 39 minute deficit after being hit by a windless patch while leading on Stage 1 and watching the fleet sail past them. It looked like ill luck was set to stay with them as they were forced on a more and more northerly course.

Their strategy worked, bringing them back in touch with the fleet after days of ever more lonely sailing towards Japan, before Groupama took control in a strong easterly position on day seven.

CAMPER hopes of challenging for the lead suffered a devastating blow when they tore their vital J2 headsail, losing 60 miles to Groupama in the process, and it became increasingly clear that this was all about the race for second.

The three boats behind Groupama stayed neck and neck all the way through to the finish, as behind them Abu Dhabi and Sanya closed the gap significantly.

Sanya, stranded 393 nm off the pace on day 17, were within 30 nm of PUMA by the final morning — not quite close enough to challenge for a podium place but satisfied to have been part of a terrific scrap.

“It’s very cool to be home and to have everyone out supporting us,” said New Zealand native Sanderson. “I couldn’t be any more proud of the leg we sailed. The fact that we kept up with and finished so close to the new boats just shows that we can be competitive.”