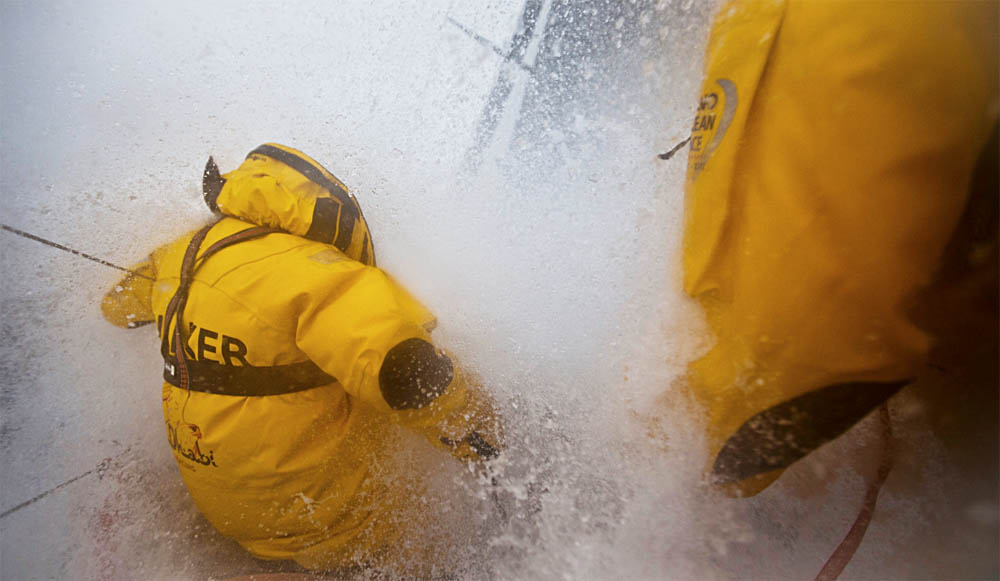 After two days of relentless punishment from high winds and huge waves on Leg 5 from Auckland to Itajaí the top five boats are set for some relief over the next 24 hours as two high pressure systems bring lighter conditions.

According to race meteorologist Gonzalo Infante the merging systems will envelop the main pack in light unstable breezes and could push the boats hard south in search of stronger westerly winds.

An ice exclusion zone now set around 47 degrees south may further complicate the teams’ strategies but Infante says the fleet could reach steadier westerly winds around midday on Wednesday.

At 1400 UTC today Team Telefónica had a four nautical mile margin at the front of the fleet, a lead which navigator Andrew Cape said was under threat as the overall race leaders head into the lighter winds.

“Anything could happen here, it’s all on for young and old,” Cape said. “We’re the first to get into lighter air so it’s always a case that the boats behind us could catch us. So right now everyone is a threat, even Abu Dhabi.

“We could park here for the day and they’ll be right back here with us and choose a different path.”

Cape said the developing high pressure ridge would mean slow going for the whole fleet and could pay a huge dividend to whoever broke through to stronger winds first.

“The picture ahead doesn’t look brilliant for anyone, as we have to move across this ridge that stands between us and going fast,” he said. “It’s going to be a pretty slow next 24 hours and the first to break through is going to be going great.”

The break in hard running has come as a relief to several of the already wearied teams allowing them to affect running repairs to both boats and bodies.

Read said two crew injuries sustained in the brutal first 48 hours of the leg had almost resulted in PUMA detouring 500 nm to the Chatham Islands for an emergency evacuation of helmsman Thomas Johanson and bowman Casey Smith.

Johanson dislocated his shoulder after being washed across the boat’s cockpit by a wave and Smith was confined to his bunk by a reoccurrence of a pre-existing back injury during a routine sail change.

“Thomas found himself on the leeward side of the cockpit, crumpled in a heap,” Read explained. “He was coming on deck and got blindsided by this wave and got crunched.” 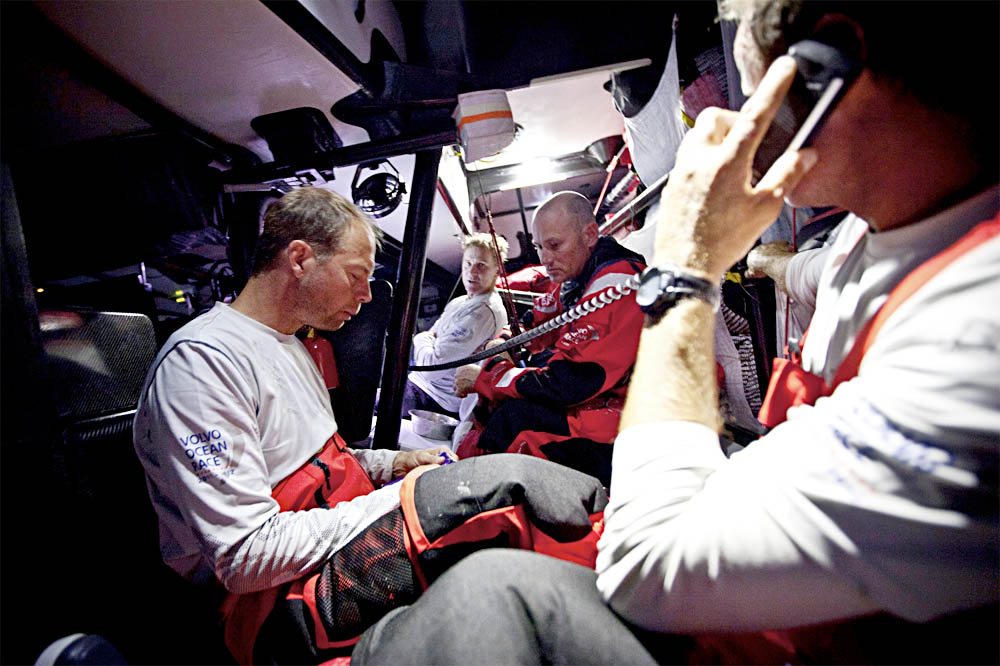 “Jono just slowly popped his shoulder back in place and all of a sudden you saw his eyes open up,” Read said. “It was instantaneous relief. He was back on deck today having a drive, so he’s recuperating quite quickly.”

However Read said Smith’s back injury was a trickier scenario which they were treating with pain medication and could still require him to be taken off the boat at Cape Horn.

“At one point we were heading to the Chatham Islands to get rid of both of them,’’ Read confirmed.  “But then Thomas’ shoulder got popped back in and we had a long talk to Casey.

“He’s a tough guy, he’s a team guy, so essentially we said let’s at least get to Cape Horn and if there’s no improvement by then, we’ll figure out a way to get rid of him. But up until then there’s not a whole lot of options.”

“Hopefully the medication will start to work a bit better and we’ll see a light at the end of the tunnel. Right now he’s still in pain,’’ Read said.

On second placed Groupama sailing team, skipper Franck Cammas said the French crew were in good shape having used the moderating conditions for sail repairs and to fix some niggling leaks.

“We now have 12 to 14 knots of wind and finally a flatter sea state,” Cammas said today. “Sailing without the shocks – better conditions.

“The boat is fine. We had some issues during the first night and the following day but today there is no problem anymore and we can use every sail and have fixed the leaks.”

Cammas said he was not expecting any fast sailing for around a week as the closely packed fleet squeezed between the ice exclusion zone and the high pressure.

“Right now the fleet is really grouped — 40 miles for the first 5 boats with still 3,500 miles to go to the Cape Horn is really small,” he said. “There isn’t a big option to take. We are expecting light wind in the next few hours and it already went down a lot.

“We will cross a high pressure zone and have an ice zone to respect. Sadly that stops us from going south enough to pick up stronger winds. So we are not expecting very high speeds within the seven next days.”

Team Sanya were in fifth, 40 nm off the lead.

Abu Dhabi Ocean Racing, who resumed racing yesterday after returning to Auckland for repairs on the first day, were 419 nm off the lead.