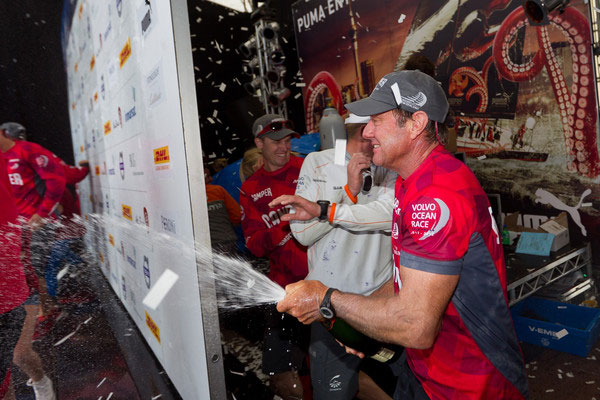 Local heroes CAMPER with Emirates Team New Zealand stormed to victory in front of tens of thousands of ecstatic home fans in the Auckland In-Port Race on Saturday, giving them a first Volvo Ocean Race victory and ‘flicking a switch’ on their campaign.

Chris Nicholson’s men produced a dominant performance on the waters of Waitemata Harbour, taking the lead on the sprint to the first mark thanks to their decision to tack way out to shore and out of the strongest current, and then refusing to let go.

Fifty-four seconds after they heard the gun – and huge cheers from the crowd — PUMA Ocean Racing powered by BERG crossed the line in second place ahead of Groupama sailing team following a terrific battle for the podium positions.

Behind them, Auckland-born skipper Mike Sanderson was also celebrating as Team Sanya finished the race in fourth, having out-manoeuvred Abu Dhabi Ocean Racing in fifth and overall race leaders Team Telefónica in sixth.

Tens of thousands of people lined Auckland’s shoreline and packed hundreds of spectator boats to watch Auckland’s first Volvo Ocean Race action in 10 years – and a win for CAMPER, the Spanish-sponsored team who count Auckland as one of their two home ports, made the day all the more special.

“The one thing we said all week is how do we thank everyone who has supported us and I hope this goes a long way to doing it,” said CAMPER’s Australian skipper Chris Nicholson as his team moved back to within 18 points of the leaders. “It’s been a huge week of support and it’s helped.

“Now we’ve flicked the switch and we want this on the next leg.”

PUMA Ocean Racing powered by BERG got off to a flying start leading the boats over the line in 15-20 knots of easterly breeze but by the first turning mark CAMPER had snuck in front.

Groupama moved up into second but PUMA clawed their way back on the second upwind leg, overtaking Franck Cammas’ men to claim second and bank a vital five points.

“It was a lot of fun,” said PUMA skipper Ken Read. “We had a good start but CAMPER got the first shift and that’s all they needed.”

With Telefónica picking up just one point for sixth place, their stronghold on the overall leaderboard weakened.

“We had a pretty bad race,” said Telefónica skipper Iker Martínez. “We didn’t sail well, so it was a headache for us. It was pretty difficult. We didn’t have much room to play with out there.”

Groupama moved to within 15 points of the overall leaders as they took home four points from the in-port race.

“Third is not so bad,” said Cammas. “We had a problem with the keel which lost us the 20-second advantage which we had over PUMA and PUMA took advantage well to overtake us. But apart from that we are happy with the race.”

Team Sanya scored their best result since the Iberdrola In-Port Race in Alicante, the first competitive racing of the 2011-12 Volvo Ocean Race.

“That was awesome,” said Sanya’s local boy Sanderson. “We’re just so stoked to be in the race but that was one step better because we had a couple of boats behind us.”

The fleet now faces its biggest challenge yet when they set sail from Auckland at 1400 local time on Sunday – the Southern Ocean.

The 6,705 nautical mile sprint around Cape Horn and on to Itajaí in Brazil will see the teams dodging icebergs and huge storms.

“The Southern Ocean is a fearsome place and deserves a great deal of respect,” said Telefónica watch captain Neal McDonald. “Climbing Everest is not particularly risk free or glamorous but people want to do it for the challenge and it’s the same with the Southern Ocean.”

Waves of 12 metres and winds of up to 60 knots are forecast and teams will use night-vision goggles to try to spot icebergs at night.

Three new sailors join the fleet for Leg 5. Anthony Nossiter from Australia is joining Abu Dhabi to replace the outgoing trimmer/helmsman Justin Ferris, Finnish Olympic gold medal winner Thomas Johanson takes over for the leg from injured Kelvin Harrap on PUMA and Danish Olympic gold medallist Martin Kirketerp steps up for Leg 5 on Sanya for Ryan Houston who picked up a kidney infection.

The Leg 5 start will be broadcast live from 1400 local time (0100 UTC) on Sunday. The leg should take the fleet around 17 days to complete.

Watch the action live at www.volvooceanrace.com or at the race’s Livestream page. Coverage starts 15 minutes prior to the leg start.