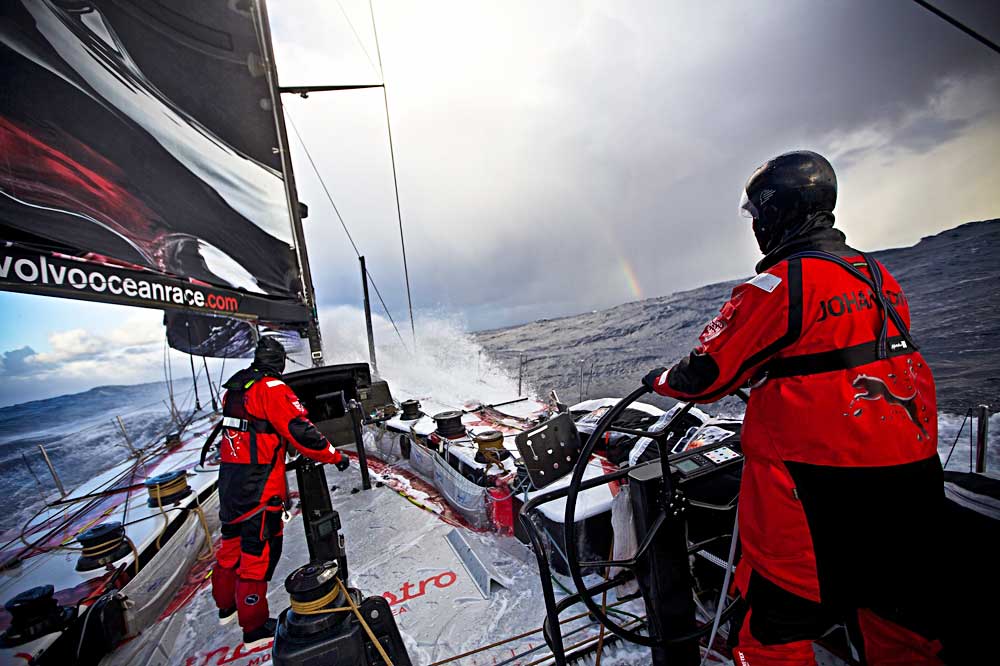 Leg 5 leaders Groupama and PUMA extended their advantage over the fleet in strong winds and huge seas on Sunday, as Telefónica made cautious progress and CAMPER accepted they would have to make a brief pit-stop in Chile for repairs.

While the leaders were passing the central waypoint in the Southern Ocean ice exclusion zone, CAMPER with Emirates Team New Zealand were settling on Puerto Montt on the west coast of Chile as the best place to repair damage to their bow.

CAMPER skipper Chris Nicholson, who pledged to complete Leg 5 from Auckland in New Zealand to Itajaí in Brazil once the work is done, said their predicament had begun to snowball after repairs were needed to a forward bulkhead earlier in the leg.

“We repaired that only for that repair to fail again probably about three days ago,” he said. “Then we were trying to stem the flow in terms of stopping the problem getting any worse.

“The bulkhead offers a lot of support to our longitudinals (hull supports) and we have to keep the longitudinals intact. Unfortunately some of the secondary bonding let go of the longitudinal and that’s when seamanship has to take over and basically call enough is enough.

“We will suspend racing once we get closer to Puerto Montt, do our repairs and get back in the race,” he added. “We estimate it will be three days of repairs and then we will be on our way to Itajaí.”

At 1300 UTC, Groupama sailing team were 48 nautical miles ahead of PUMA Ocean Racing powered by BERG, with Team Telefónica 120 nm off the pace.

Telefónica skipper Iker Martínez confirmed the Spanish crew were concentrating on protecting their boat and themselves against the harsh conditions in order to complete the leg safely.

“Everyone’s security comes first,” Martínez said. “We had a problem in the bow that we don’t want to escalate. It’s a shame having to go slowly, we don’t like it at all, especially when you’re fighting.

“The boat is going well now, but there is a danger that it could be damaged, so that is why we have decreased our speed.” 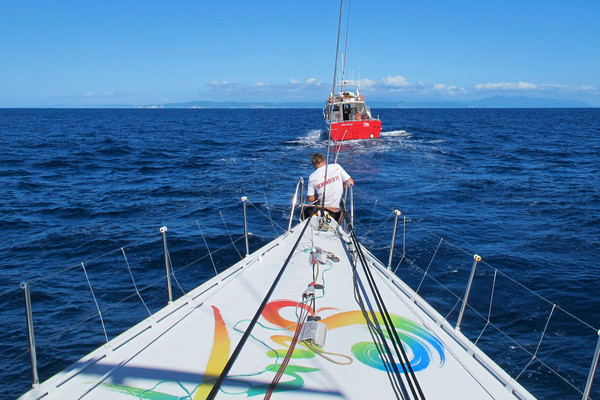 Groupama skipper Franck Cammas said the French crew were taking every precaution necessary after sailing in 30 to 40 knots of breeze for more than 24 hours.

“It is true we have more a foot on the brake than on the accelerator,” Cammas said. “We know we are on the limit and the boat’s structure is bearing a lot of load. We don’t really know where the limit is and that is why it is a bit stressful for the helmsman and the crew to sail as smoothly as they can.”

Second-placed skipper Ken Read said his PUMA team were holding up well, “touch wood”, in conditions he reckons even the saltiest of old sea-dogs would agree were classic Southern Ocean.

“It’s windy, wild, with massive waves, yeah, everything you’ve ever read in a travel brochure,” he said.

“The boat is holding up spectacularly so far. I like to think we’ve picked our times really well on when to throttle down and when to ease off on the throttle. It’s very easy to let these boats get away on you. You just take off. Certainly there are wind conditions that you have to reel them in.”

Meanwhile, over 900 nm behind the leaders fifth placed Abu Dhabi Ocean Racing were still languishing in light winds having passed the eastern end of the ice exclusion zone.

Abu Dhabi skipper Ian Walker said the Roaring Forties had so far been more of a whimper. “We have finally reached the Western ice gate waypoint and must now try and head due east,” Walker said.?“Unfortunately as we expected we are now totally becalmed as the centre of the high pressure passes over the top of us but in 24 hours we should be clear and can start making proper progress towards Cape Horn.

“We cannot help but look at the position and wind reports of the boats ahead to even wonder if we aren’t in the best place,” Walker said.