A speedy passage through the Doldrums into south easterly trade winds by race leaders Groupama saw the French crew extend their advantage at the front of the fleet to almost 90 nautical miles (nm) over second placed PUMA Ocean Racing powered by BERG.

However, with over 1,500 nm of racing and an increasingly complex weather scenario ahead of them Franck Cammas’ crew are still very much feeling the heat from the chasing pack. 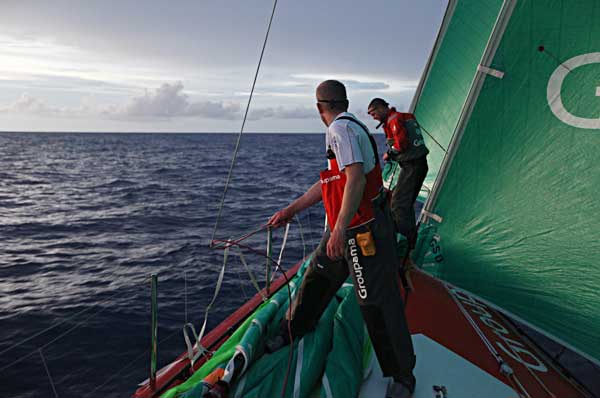 Groupama helmsman Damian Foxall said their Doldrums crossing had been brief but eventful as they picked their way carefully through, successfully dodging the wind holes which had scuppered them on the first and third legs.

“We had lots of squalls and clouds but no areas with no wind at all,” he said. “We avoided the lulls and made the most out of the gusts.”

Despite having stretched their lead Foxall said there was still nervousness on board, particularly about race leaders Team Telefónica who re-emerged as a potential threat after a fast run through the middle of the Solomon Islands.

“It was well done by Telefónica, they came back in to the match through the islands,’’ Foxall said.  “They are back in the game.”

At 1300 UTC today Groupama were the fastest boat in the fleet sailing in solid trade wind conditions at an average of 16.3 knots — more than two knots faster then anyone else.

On third placed Telefónica, despite being 142 nm adrift of Groupama, navigator Andrew Cape said he expected chances to open up on the way to New Zealand as the fleet faced a constantly evolving meteorological scenario.

“We still have opportunities,’’ he said.  “The weather situation is very unclear. It’s six or seven days until we reach the top of New Zealand and the weather is changing rapidly.

“Outside of the three day forecast a lot of things can happen,” Cape said. “You can gain or lose, so you have to just keep on top of your game.

“We’re still going for the win. I think in three or four days time there will be loads of tricky conditions going on and anything can happen.” Abu Dhabi Ocean Racing navigator Jules Salter said Ian Walker’s fourth placed crew were happy to have maintained lateral separation with the boats in the west despite having lost miles when Telefónica, CAMPER and Team Sanya pulled off their successful Solomon Island sortie.

“If we were along side them (now) we wouldn’t be quite as fast as them. At least having this separation with them gives us a few options,” Salter said before re-affirming the Emirati team’s commitment to pull out a good leg result.

“We haven’t given up yet,” he said. “We’re still in the hunt. We won’t really know until the end. Even if you end up 40 miles behind the other boats, it’s so light heading into Auckland at the moment that there’s even potential in the last couple of hundred miles.”

Race meteorologist Gonzalo Infante says the fleet should enjoy consistent east-southeast trades of 10 to 15 knots in the Coral Sea before the winds freshen and turn southeast favouring Groupama and PUMA in the east.

The fleet should reach the island of New Caledonia by Monday afternoon, with latest predictions taking the fleet to the west of the 300 nm land mass.

From there the teams will have to sail against the wind to the finish in Auckland with the leaders expected to arrive on or around March 10.