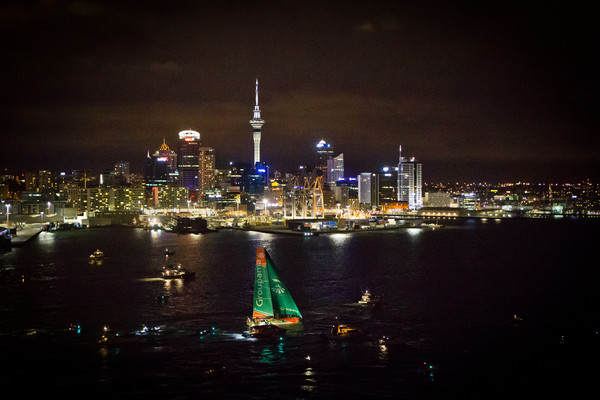 Auckland, New Zealand – Groupama sailing team survived a late scare to secure a dramatic victory on Leg 4 of the Volvo Ocean Race 2011-12 on Saturday, crossing the finish line shortly before midnight in Auckland to end Team Telefónica’s winning streak and give New Zealander Brad Marsh a homecoming of a lifetime.

The French team, appearing in the race for the first time, had to isolate a leak and furiously pump out around a ton of water after suffering damage to the bow within hours of the finish line, following repeated upwind pounding in eight-metre waves over recent days.

Quick work from the crew averted a potential disaster, ensuring bowman Marsh would be the first New Zealander into Auckland, with PUMA still more than 100 nm behind them and locked in a tense battle with Telefónica — winners of the first three offshore legs — and CAMPER for the remaining podium places.

The French team rallied in eight metre seas and 30 knot headwinds to isolate the leak and drain 1.5 tonnes of water before crossing the finish line at 10:33:47 UTC/23:33:47 local, more than 80 nautical miles ahead of their nearest competitor.

Skipper Franck Cammas was thrilled with the win and becoming the first French team to notch a victory in a Whitbread/Volvo Ocean Race finish into Auckland, although 33 Export did win on handicap back in 1977-78.

“It’s a great day for Groupama 4 and it’s a great to arrive here first into Auckland,” Cammas said. “I’m pretty sure we’re going to have a good time here with all the sailing fans. It’s a good place to win for sure.”

Cammas, a first time Volvo Ocean Race competitor, said the race was won and lost on a bold decision made by navigator Jean-Luc Nélias.

“The key thing for this leg was to be quick and to make good decisions,” he said.  “We knew we had to do both of those things and we did. This is where we ended up.

Winning the unofficial race to be the first Kiwi home was elated Groupama bowman Brad Marsh, who flew a New Zealand flag overhead as the team were welcomed to Auckland’s Viaduct Harbour by hundreds of family, friends and fans. Other international sailors on-board Groupama include Sweden’s Martin Krite, Australia’s Phil Harmer and Ireland’s Damian Foxall.

Meanwhile, the race for the remaining podium positions continues, with PUMA Ocean Racing powered by BERG holding a narrow lead over Telefónica and CAMPER.

Groupama’s victory marks the Volvo Ocean Race’s eighth visit to Auckland and the first since the 2001-02 edition stopover in the city.