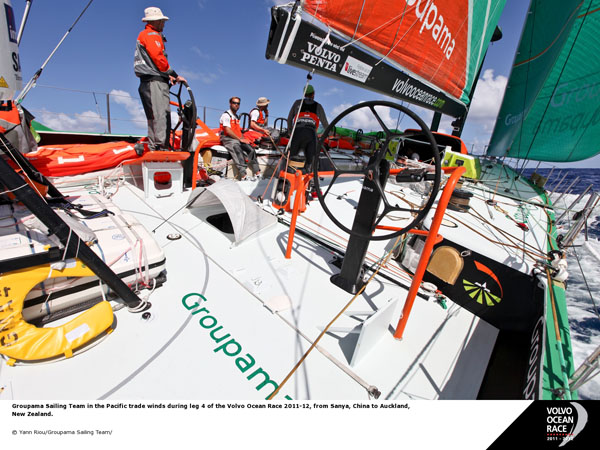 Groupama sailing team are today making the most of fresh trade winds to increase their margin at the front of the fleet as they power south faster than anyone else.

At 1300 UTC Franck Cammas’ crew had extended to 112 nautical miles (nm) ahead of Ken Read’s PUMA Ocean Racing powered by BERG in second and more than 165 nm in front of Iker Martínez’s third placed Team Telefónica.

Groupama were the first boat into stronger steadier trade winds, enabling them to create a much needed safety margin which bowman Brad Marsh believes could come in handy before the finish when the weather scenario could be very different.

“Our aim right now is to keep a buffer on the guys behind us and hopefully if things go wrong we have enough to hold them back,’’ he said.

“If the weather system changes, like with the system that is sort of threatening to develop behind us, then it’s easy to get all the boats scattered across the ocean.

“That creates a chance for someone like Telefónica or PUMA or CAMPER to make a rather large gain with a new weather system coming in from behind us. That’s the risk we have at the moment,” Marsh said.

According to race meteorologist Gonzalo Infante a 24 hour drag-race south is on the cards before the fleet turn towards New Zealand’s North Cape and slug it out against the wind to the finish in Auckland.

Infante says the final days of Leg 4 are unlikely to be straightforward as a low-pressure system lurking over Fiji could mean a major headache for the fleet’s navigators.

“An eastern course runs the risk of falling foul of the low’s light winds but reduces the anticipated upwind sailing to the finish, while a more western course means faster angles but sailing a greater distance against the wind,” Infante explained.

Fourth placed CAMPER with Emirates Team New Zealand navigator Will Oxley has plumped for the more westerly option and reckons the rest of the fleet will have to get closer to CAMPER’s track to avoid the low pressure.

“It looks like there’s low above New Zealand,” he said. “To the west of that low extends a finger of quite low air, so the boats in the east will end up having to come down to our line to get around that and we hope to see some compression at that point.” 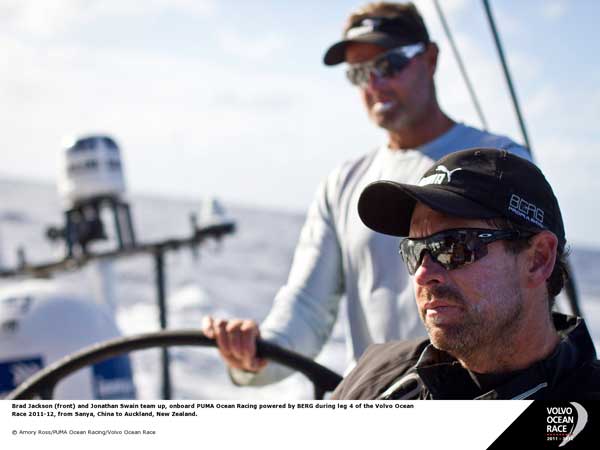 Oxley also hopes the western route could help them equal the reaching pace of Groupama, PUMA and Telefónica — all three Juan Kouyoumdjian designs.

“I don’t think there’s any secret in the fact that this sort of reaching is not our strong point against the three Juan K boats,’’ he said. “It’s very hard for us to go the same speed in equal conditions, so we hope that we have a little more lifting breeze being a little more west than them which enables us to match their speed.”

Despite being in fifth place at 1300 UTC today and 37 nm behind CAMPER, Abu Dhabi Ocean Racing skipper Ian Walker still believes the Emirati team have plenty to play for before the finish of Leg 4.

“After sailing so well and pushing hard to get into third we now find ourselves in fifth, but hopefully with a shot still at CAMPER,’’ Walker said. “We have just made a nice gain back at them and so maybe we still have a chance to convert our easterly position into gains.”

The first boat is currently expected to arrive in Auckland on March 10 around 1000 UTC.