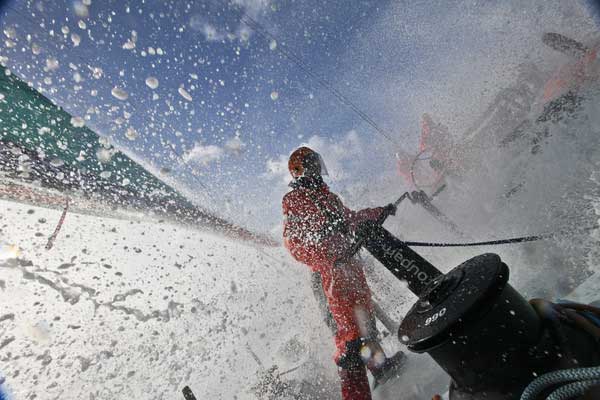 “The mean green reaching machine Groupama 4 is on fire, we’re flying, sailing really well,” says bowman and boat captain Martin Krite as the team consolidates its lead to 80.7 nautical miles with just under 3,000 nm to go to the finish in Auckland.

Sheets eased and high mileage in the open ocean are exactly the conditions the Volvo Open 70s are designed for, and during today Telefónica (Iker Martínez/ESP) became the fourth boat in the six-boat fleet to break the 500 nm barrier, covering 500.32 in the past 24 hours.

But, speed comes with a price. CAMPER with Emirates Team New Zealand split their number 2 headsail and the crew of Abu Dhabi Ocean Racing (Ian Walker/GBR) had to repair to their daggerboard crane. Both teams have completed the jobs and the two boats are back up to speed, trying to regain the miles lost.

It’s not just the boats that are being battered by the fierce but fun conditions, bodies and minds are suffering too.

“With another 30+ hours of similar conditions, there is bound to be more action. People are beginning to wear thin and the non-stop fire hosing is taking its toll on bodies and minds,” reported Nick Dana, media crew member (MCM) with Abu Dhabi Ocean Racing.

Skipper Ian Walker was pinned between the rail and the heaviest sail earlier today. His shin took the brunt of it and he was struggling to bear weight on his foot. Feeling nauseous with pain, he crawled down below to rest. “Most likely it is just a bad bone bruise, but it hurt like you wouldn’t believe,” the skipper said from the confines of his bunk.

Another casualty onboard the Emirati boat was watch leader Craig Satterthwaite, who when standing just in front of the steering guard cage was engulfed in a massive wave that broke over the boat just forward of the beam, sending a large wall of water crashing over the boat. In the deluge, Satterthwaite’s upper body was crushed against the titanium guard, causing possible bruising to his rib cage; otherwise, he was wet but unharmed.

“It is becoming difficult to look after yourself out here, let alone trim a sail,” commented their bowman Justin Slattery. “It’s good preparation for the Southern Ocean though, and we needed to do some more of this kind of sailing before getting down in a less forgiving environment,” he said. “This is a walk in the park compared with what we will see down south,” he added.

At 1600 UTC today, all five boats chasing Groupama 4 had made small inroads into their lead, which stood at 79.10 nm, however at 1900 UTC tonight, Groupama 4 has pulled out two miles on PUMA who is 80.70 nm behind in second place. Telefónica has gained a mile and is 10 nm behind the big cat in third, while CAMPER has managed to stop the bleeding and has her big headsail set. Only five nm behind is Ian Walker and his men. Losing a mile in the last three hour sis Team Sanya who is 156.6 off the lead. Average speeds over the last three hours are all around 19 – 20 knot mark.