Groupama sailing team have claimed the Leg 5 lead after CAMPER throttled back to repair damage in the Southern Ocean, with worsening Southern Ocean conditions forcing all the teams to play a percentage game.

The fleet has been menaced by the Roaring Forties with winds gusting in excess of 45 knots and waves of 10 metres, giving a sense of plummeting off a two-storey building when the boats inevitably fall off the back of them.

Few have suffered more than CAMPER with Emirates Team New Zealand, who were forced to slow down to repair bow damage sustained after falling heavily off a wave and delaminating a forward structural beam.

Skipper Chris Nicholson sent a reassuring message that the crew was safe.

“The boat is in no immediate danger and the crew is fine, but with the bow now flexing and the weight of wind we cannot push on as fast as we would like,’’ Nicholson said. “We are starting on repairs that will allow us to get going as fast as is practical.” 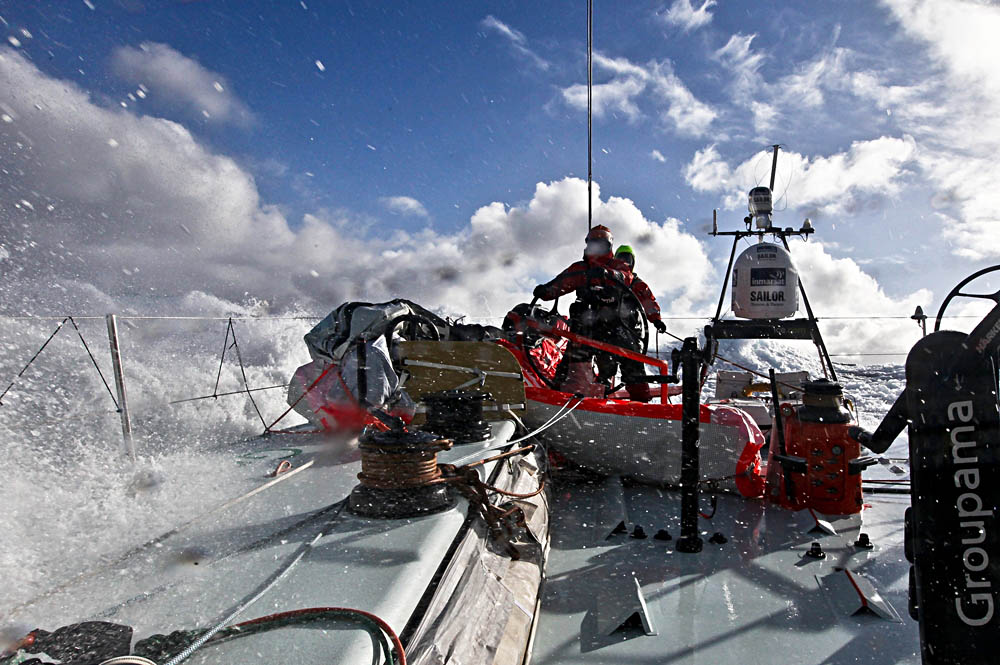 Groupama pounced on the opportunity to steal the lead, taking pole position at around 2200 UTC on Friday. In the last 24 hours they have clocked up 480 nautical miles.

Helmsman Laurent Pagès said it was tough to maintain strength and concentration in the face of the ferocious conditions.

“Because of the water and the helmet we’re obliged to wear, we don’t really see a thing,’’ he said. “At some point it’s a bit as if we were closing our eyes. You have to follow your feeling with the boat, her heeling angle, her acceleration and her longitudinal trim.”

Team Telefónica have slipped into second place, 18 nm behind Groupama. Navigator Andrew Cape said it was now a game of percentages as the teams try to strike a balance between speed and self-preservation.

“We’ve been reaching, but to a larger extent surviving,” he said. “We’re at about 90 per cent of our capabilities. We’ve got a bit in reserve.

“We’re happy with where we are, a lot happier than where we were before. We’re still pushing, but we’re mindful that there’s a long way to go yet.”

In third position, PUMA Ocean Racing Powered by BERG navigator Tom Addis said his team were pushing at about 85 per cent.

“With 30 knots of breeze in flat water these boats sail incredibly fast, but when you’ve got waves crashing over the deck you have to back off a bit,’’ he said.

“We all push as hard as we want to push. We’ve all got different strengths and weaknesses. Once we get around Cape Horn it all changes.” 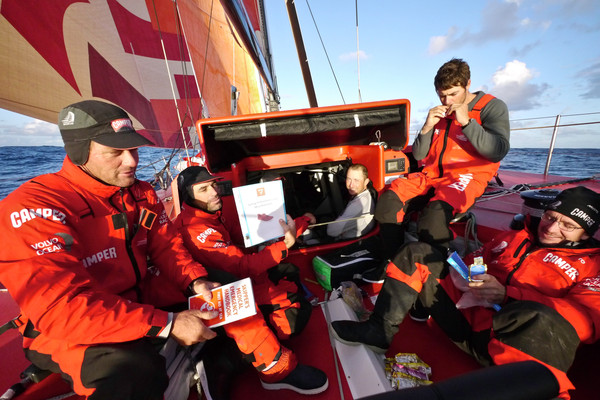 CAMPER remain in fourth place, way ahead of fifth placed Abu Dhabi Ocean Racing, who trail the leaders by more than 600 nm.

“Not exactly the Southern Ocean at its best,” he said. “But, you have to be careful what you wish for down here. I suspect the fleet is complaining of too much wind right now and wishing for a light spot.

“It is increasingly clear that given the forecast we will be at least two or three days behind the leaders at Cape Horn and there is nothing we can do about it. We have to sit this one out, keep the boat moving as best we can and hope something develops later in the leg.”

Team Sanya continue to trek to Tauranga in New Zealand where they will assess their damaged rudder and their best chance to return to the race.

Conditions are expected to worsen over the next 24 hours, according to Volvo meteorologist Gonzalo Infante.

The fleet will fall in the western and most violent portion of the Southern Ocean low, which will pack gale and storm force winds with gusts up to 55 knots and waves in excess of nine metres. The conditions are expected to remain severe until the fleet passes Cape Horn.