After some of the worst weather ever experienced at a leg start of the Volvo Ocean Race, five of the six-boats led by Iker Martínez’s Telefónica is making the most of a brief respite as a ridge of high-pressure blocks their path to the westerly depressions which will sweep them towards Cape Horn.

The lighter conditions have not come a moment too soon for the teams who collectively say it is the worse weather they have seen.

“Certainly the roughest 24 hours I can remember for the last four editions of this race,” said Chris Nicholson, skipper of second placed CAMPER with Emirates Team New Zealand. “Going over the waves is like playing Russian roulette every time, when you just hope for the best.”

The crew of CAMPER have not enjoyed the blast-reaching conditions, which are better suited to other boats in the fleet. Nicholson and his men are having to push hard to tease every ounce of performance out of the boat in order to keep in touch with the leaders until conditions that suit their boat better arrive.

Andrew Cape, navigator with leading team Telefónica, said moments ago that the weather picture ahead doesn’t look very promising for any of the teams. 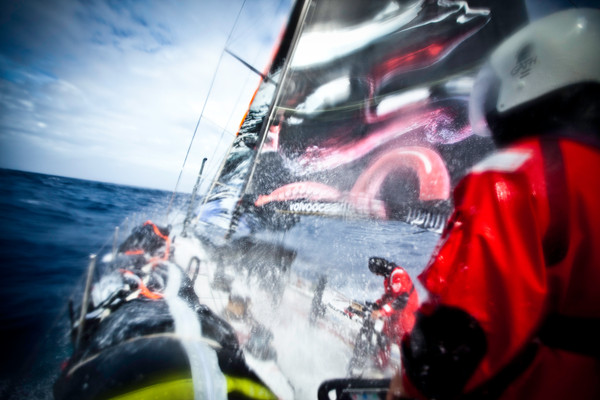 “There is a big squall of nothing ahead of us as we have to move across this ridge that stands between us and going fast,’’ he said. “It will be pretty slow for the next 24 hours, and the first to break through will be going great. I think it will be a difficult approach. We’re just looking at it and will try our best.

“Right now everyone is a threat, even Abu Dhabi. We could park here for the day and they’ll be right back here with us and choose a different path. Anything could happen here, it’s on for young and old.”

All but Ian Walker’s Abu Dhabi Ocean Racing have crossed the International Date Line and are now at 40 degrees south. The temperature is dropping and below deck the boats are becoming damp with condensation. The easing conditions have however allowed the crews to repair minor damage and stem small leaks as well as rest up in anticipation for the strong westerlies that lie ahead.

Abu Dhabi Ocean Racing meanwhile, is still in the thick of it as they struggle to catch the fleet.

“Yewww, what a thrashing we took last night,” reported media crew member Nick Dana. “People being sick in the bilge, waterlogged sails being dragged across lifeless off-watch bodies floating in the bilge. Even 14-hour straight runs with no sleep for some of the boys.”

The sea state for the beleaguered Emirati team has been atrocious, with waves breaking over the boat in every direction. Skipper Ian Walker has decided that it is best not to watch the fleet positions. “It will be too depressing as they escape in freer winds,’’ he said. “Our task is simply to get to Brazil safely and as fast as we can. Walker thinks that if they are lucky, they could catch the fleet, but it will not happen overnight and most likely not before Cape Horn.

At 1000 UTC today, the fleet was around 191 nm north-west of the Chatham Islands, averaging speeds of 12 to 14 knots. Telefónica led the fleet from Groupama (Franck Cammas/FRA), with PUMA Ocean Racing powered by BERG (Ken Read/USA) in third and CAMPER now in fourth. The leading four are still keeping a tight pack with only 13.8 nm from first to fourth. Mike Sanderson’s Team Sanya is 40.3 nm stray of Telefónica, while Ian Walker and Abu Dhabi Ocean Racing have more than 400 nm to make up.

Race followers may have noted some anomalies in online race data today. The sea state has affected the transmission of data from Abu Dhabi Ocean Racing, resulting in inaccurate measurements overnight. In combination with this, an adjustment of the ice limits distorted the distance to leader and finish data. Race organisers have since amended the way in which this data is calculated.