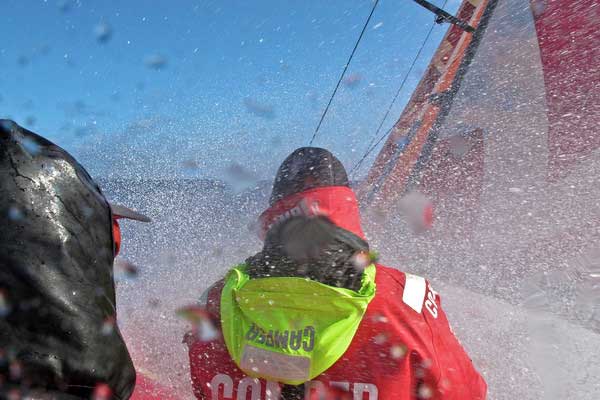 The 24-hour speed distance record for the current edition of the Volvo Ocean Race is under threat as the fleet face four days hurtling south at up to 30 knots.

CAMPER with Emirates Team New Zealand set the bar at 554.16 nm during Leg 1 from Alicante to Cape Town – but as the six teams power south through the Pacific Ocean trade winds the record could tumble.

Volvo Ocean Race chief meteorologist Gonzalo Infante said the latest weather and routing models suggest that several of the teams stand a chance of bettering CAMPER’s record over the next few days — particularly those able to sail wider angles in the east.

“It’s going to be very close but it’s very possible the record could fall in the next few days,” Infante said.

The arrival of the solid north-easterly trade winds benefitted the easterly boats first with leg leaders Franck Cammas’ Groupama sailing team extending their advantage at the front to 55 nautical miles (nm) in the 1300 UTC position report.

To the west of the fleet Chris Nicholson’s second placed CAMPER and Iker Martínez’s third placed Team Telefónica continue to struggle to match the speeds of the trio in the east.

On Abu Dhabi Ocean Racing skipper Ian Walker could hardly contain his delight at the opportunity to capitalise on the eastern investment they had made, often in light and tricky conditions.

“Fortunately all the easting we have strived for over the past week allows us to sail as wide an angle as we are.

“The wind is 25 knots and building. Boat speeds fluctuate between 18 and 30 knots.

“The miles to the finish are now tumbling fast which makes the soaking on deck well worth it.”

PUMA navigator Tom Addis said the crew was enjoying the chance to unleash the full potential of their boat in the open ocean.

“It’s been fantastic, fast reaching,” Addis said. “We’re back in open water, no shipping, no fishing nets, no debris to dodge.

“We’re just letting the boat rip doing 22, 23 knots, reaching with bow up. It’s what these boats are good at so that’s always a nice feeling.”

Addis added that PUMA were aware that they must keep up their breakneck pace for the next few days if their northern ‘further but faster’ strategy was ultimately to work.

“Opportunity is ahead for us starting from now, for sure, especially after all our hard work to get east,” he said.

“After all this torture we’re going to finally have wider and faster angles than most of the guys, so we should be gaining by the hour. We’ve put in the hard work, and now it’s time to reap the rewards.

“When you travel the most miles in a leg like we have, I guess you’ve got to expect to put some good runs on the board. We had 26 knots earlier, we may get close again but it’s likely to just average 20 knots plus.”

Team Sanya skipper Mike Sanderson said although his crew were in sixth they had done well to stay in the hunt but were now facing some big losses in a drag race against the more powerful newer boats.

“We’ve worked very hard through the change of positions to be among the pack, we’ve led at times and we’ve been last at times, but now we’re faced with the reality of the speed of these new generation boats,” Sanderson said. “They’re going in excess of a knot faster than us, and they’re just going to sail on by.

“We’re all very competitive sailors and we’re all used to winning, but now we’re just not fast enough through the water after battling for the last week to keep up.

The fleet still have more than 3,500 nm to go to the finish in Auckland and are expected to arrive around March 9.