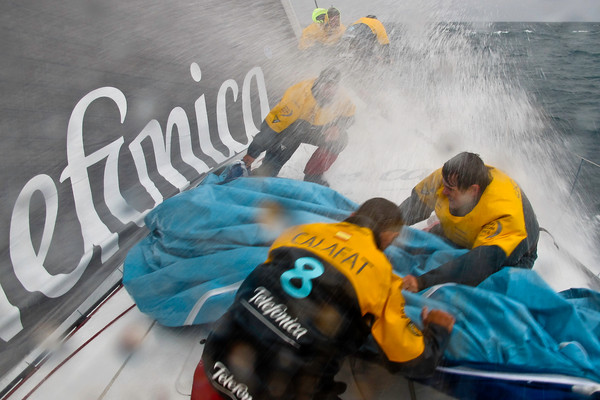 With sheets cracked, the six-boat Volvo fleet led by Telefónica (Iker Martínez/ESP) is blast-reaching towards 40 degrees south at speeds of 17 to 18 knots. But, before the sleigh ride of the Roaring Forties towards Cape Horn can begin in earnest, the fleet will have to cross a ridge of high-pressure causing lighter breeze on Tuesday, which will add to the complexity of this leg from Auckland to Itajaí in Brazil.

At 6,705 nautical miles (nm), this is the longest leg of the around the world course and according to Stu Bannatyne, co-skipper of second-placed CAMPER with Emirates Team New Zealand, keeping the boat in one piece in these early stages is an important part of the process of doing well in the leg.

As the leaders enter the transition zone, the wind has started to decrease to a more manageable 20 knots and more sail is piled on, however it is a very fine balance as to when to put the pedal hard down and when to throttle back.

“When we get 45 knots, or above 35 knots of wind, we are slowing the boat down a bit to get through it in once piece,” said CAMPER’s skipper Chris Nicholson in a radio interview today. “As soon as we have the right amount of sail are up, we are pushing 100 per cent.”

“We are trying to get there [to the Roaring 40s] because in those fresh running conditions we have got a good boat and good team. For me, we can’t get there soon enough.”

At 1900 UTC, the first five boats were all south of the rhumb line and each had covered over 400 nm in the past 24 hours. Iker Martínez’s Telefónica, the furthest team to the south, led the fleet 60 nm ahead of Mike Sanderson’s Sanya in fifth. Ian Walker’s Abu Dhabi Ocean Racing trailed by 723 nm having restarted the leg earlier today after returning to Auckland briefly to affect repairs.

As the transition to the westerly breeze begins, it is likely that the fleet will become more compact before extending in the exhilarating downwind surfing conditions for which this race has always been famous.