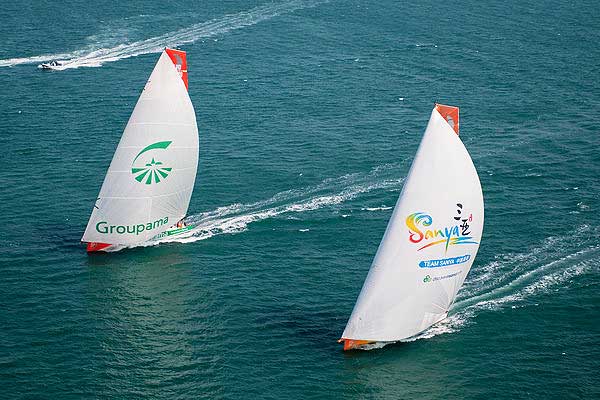 As Groupama 4 leads the fleet out into the South China Sea, probably the most dangerous section of the 5,220 nautical mile (nm) second stage of Leg 4 to Auckland, memories of racing in this region are high in the minds of many of the current competitors.

In the 2008-09 edition of the race, the crossing of the Luzon Strait, between the Philippines and Taiwan caused major damage to the fleet, something that everyone wants to avoid this time around.

Overnight the fleet had to deal with zephyr-like breeze of only five knots, which caused several lead changes as the fleet ducked and weaved through the light patches. But, as they began to edge away from the shelter of Hainan Island and out into open waters, the breeze steadily built and the wave height increased to between three and four metres.

Just 13.20 nm splits the fleet from Groupama 4 in first place, to last-placed PUMA’s Mar Mostro 13.2 nm off the lead. Already there is a lateral divide of 24 nm, from Telefónica in the north and Team Sanya in the south. 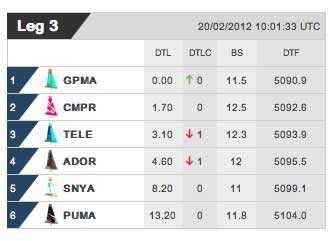 At 1000 UTC today, the six boats were slamming with a motion that was causing widespread seasickness for the first time in the race as the teams shortened sail to manage the speed of the inevitable crash landings off the waves.

Even so, average speeds hover around 11-12 knots across the fleet as the crews settle back into the rhythm of ocean racing in the northeasterly breeze.

“The trick is to back the boat off to a speed where you are much less likely to damage it,” explained CAMPER navigator, Will Oxley.

This is a very tricky leg with many unknowns due to the dynamic nature of this section of the world’s oceans. From the tropics to the Tasman, the weather systems are fast moving and variable. It’s going to be one of the most tactical legs of the race so far with plenty of opportunities to reward bold tactical manoeuvres.

The first 700 nm of racing, from Sanya to the Strait of Luzon, is going to be vital. The teams must survive strong winds and huge seas and picking the right upwind route could pay huge dividends later in the leg.

This will cause a big left over sea, and the fleet will need to reach the Luzon Strait as quickly as possible to benefit from stronger, steadier breeze from a newly developing low-pressure system to the northeast.

“Nobody is really looking forward to a week or two of upwind slog – especially in these waves,” wrote Ian Walker from Abu Dhabi Ocean Racing’s Azzam this morning.