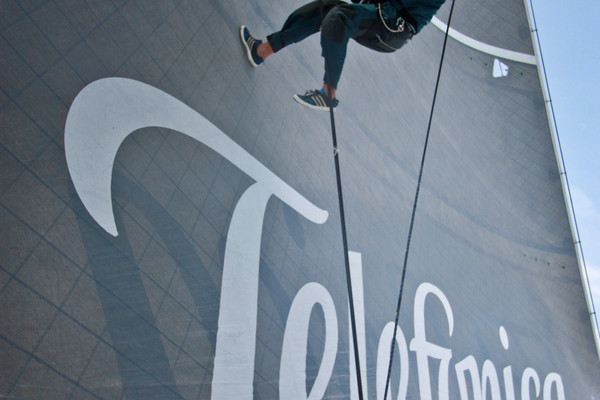 Team Telefónica have extended their Leg 3 lead as the fleet funnels into the worst of the Strait of Malacca where wind shifts, fishing nets and strong tidal surges create a roll of the dice every minute.

At the halfway point of the 3,051 nautical mile race to Sanya, China the fleet has expanded across 105 nm and slowed to average speeds around 10 knots in fickle winds that are causing plenty of hot and sweaty sail changes and crash-tacks.

PUMA Ocean Racing powered by BERG remain second after cutting the corner into the strait and edging CAMPER with Emirates Team New Zealand into third place, where they remained at 1400 UTC on Saturday.

With CAMPER firmly locked in their sights, fourth placed Groupama sailing team are poised for an assault on the leading pack, with Abu Dhabi 23 nm adrift in fifth and Team Sanya more than 100 nm off the lead in sixth.

Telefónica skipper Iker Martínez said the unpredictable nature of the strait meant strategy was as much about Lady Luck as good decision making.

“It’s a tricky area for sure and making choices is difficult too,’’ the Olympic gold medallist said. “Here, the decision making process is different. It’s a lot about chance. We try to get some information to help decide, but it’s a bit of a lottery. Right now we are just sailing as fast as possible.”

PUMA skipper Ken Read said his team were focused on reeling in the Spaniards, plus avoiding a collision course with the dozens of large ships and debris.

Read said his crew was alarmed at the sound of a loud bang on Friday, and surprised to find they had hit a tree.

“We crunched up a dagger board,” Read explained. “It probably saved the rudder, though, because the tree probably would have wiped out the rudder. We have a good chunk out of the dagger board now.”

The three-time Volvo Ocean Race competitor said the wind conditions were already proving challenging, but he was bracing for much worse in the middle section of the strait where it bottle-necks to just a few miles wide.

However, the fortunate fact of the strait, Read suggested, was that its unstable nature meant there were still plenty of opportunities for those hoping to steal the lead.

“It’s just a roll of the dice every minute of the day based on the breeze you have,’’ he said. “You can make a few gains, and be very happy but you have to moderate that with the understanding that nothing’s certain.” 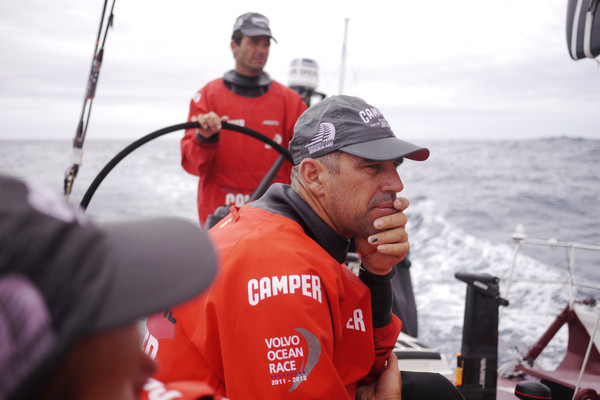 CAMPER’s co-skipper Stu Bannatyne said his team were banking on their boat’s speed in light wind and flat water to help them claw back the lead they lost on the entry into the strait.

“The key is not to do anything radical, we just have to sail the boat the best we know how,’’ he said. “We know the boat is pretty fast in light air and flat water, which is probably what we’re going to get a bit of. So it’s important not to panic, not to do anything silly to stay in touch and just chip away a little bit at a time.”

Bannatyne, who raced on board Ericsson 4 during the 2008-09 race when the team dropped from first to fourth in the strait, said he held the firm belief that there was every chance CAMPER could topple PUMA and Telefónica.

“I remember vividly in the exact same stretch of water in the last race we had a pretty handy lead in Ericsson 4 and in one little slip up we got rolled by three boats on the entrance to Malacca,’’ he said. “If you get it slightly wrong there are certainly some big mileages to be gained and lost out here.”

The fleet is expected to take the best part of three days to navigate the strait, before making a sharp left hand turn into the South China Sea. The teams are expected to finish the leg at Sanya around February 5-6.

Team Sanya will receive full Leg 3 points when they finish at their homeport, as they were unable to take part in Stage 1 because of a rigging problem, while the other five teams will receive 80 per cent of the leg points.