At 1000 UTC today, Telefónica (Iker Martínez/ESP) led Groupama 4 (Franck Cammas/FRA) by 27 nautical miles (nm) in the final showdown of Leg 3 to Sanya. Both boats tacked shortly before 0900 UTC and are still upwind but on the layline for the finish, 274 nm ahead. Soon, as the wind shifts to the right, they will have fast reaching conditions ideally suited to both boats.

Although possible, it is unlikely that Groupama 4 will catch the leaders now unless the crew of Telefónica crew make a significant mistake or suffer gear damage. To gain 27 miles in 24 hours Groupama would need average around 1.5 knots faster from for the entire period. Overnight the French crew had a scare when, with a loud bang, the mainsheet parted while fully loaded. No one was hurt and 10 minutes later, the repair was complete, but precious miles had been lost. 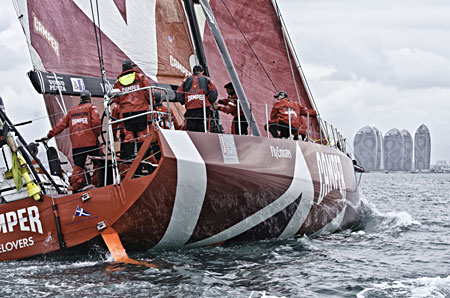 The main battle, playing out 46 nm further back, is between CAMPER with Emirates Team New Zealand (Chris Nicholson/AUS), Abu Dhabi Ocean Racing (Ian Walker/GBR) and PUMA’s Mar Mostro (Ken Read/USA). Although CAMPER currently hold third place, the boat’s reaching performance has not been sparkling in the past and both Walker and Read are hungry for a place on the podium.

Now out in the open sea, it was an immense relief for CAMPER’s navigator Will Oxley to tack away from the Vietnamese coast for the final time last night. “With poor quality charting, multitudes of unlit fishing vessels and miles of nets, not to mention shallow wrecks from the war, the potential for disaster was high,” he said. 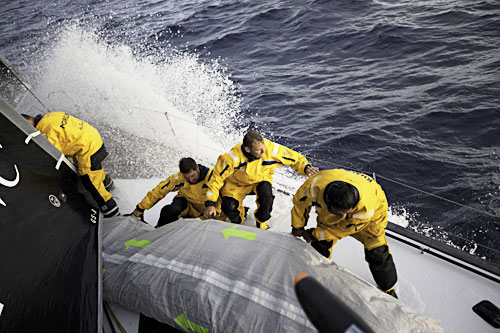 Abu Dhabi nearly came to grief last night when they narrowly avoided large steel, unlit and uncharted pillar buoy. Missing it by just a metre, Walker said it didn’t bear thinking about the damage it could have caused to the boat. “I guess a miss is as big as a mile, but this incident served to remind us of some of the unknown risks that lie out here,” he said.

Team Sanya (Mike Sanderson/NZL) in sixth, still has this to face, as well as an area of wind averaging 28-30 knots. They will be expecting to make around 15 tacks over the next 24 hours in order to keep close in to the coast and avoid the worst of the sea state.

Across the entire six-boat fleet, the crews are red-eyed and exhausted from the constant tacking and restacking of gear, sleep deprivation and lack of food. The standby watch sleep with one eye open, fully clothed and ready for the call to action as soon as a sail change or manoeuvre is required.

The leading boats are expected to arrive in Sanya around mid morning local time (UTC+8). For the six teams, this leg can’t end soon enough.