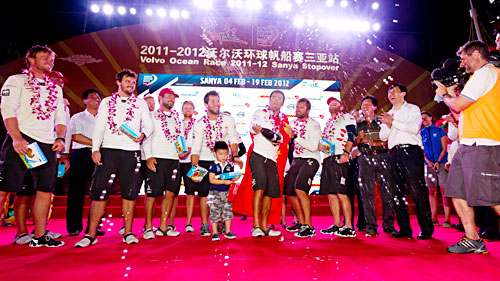 Sanya, China – Telefónica became the first team since Steinlager 2 in 1989-90 to win the first three legs of the Volvo Ocean Race when they held off the challenge of Groupama sailing team to arrive first into the Chinese port of Sanya on Saturday.

Team Telefónica, skippered by co-World Sailor of the Year Iker Martínez, finished at 03:58:22 UTC to complete the second stage of Leg 3 from the Maldives in 12 days and take 24 points. Groupama came in at 05:45:25 UTC to clinch second place. CAMPER with Emirates Team New Zealand finished in third to round out the podium finishers and remains in second place overall.

With three points in the bag from their performance in Stage 1 of this leg – a one-day sprint from Abu Dhabi to Sharjah – Telefónica sealed overall victory in Leg 3. The result sees them strengthen their position at the top of the overall standings with a total of 95 points.

Having navigated the tricky and treacherous Malacca Strait earlier in the week, Martínez said it was by far the most dangerous leg that he has ever sailed in a boat.

Navigator Andrew Cape, who masterminded Telefónica’s route from the Maldives to Sanya, added: “I never thought we were going to win this leg to be honest. I just felt that something was going to go wrong because there are too many stages where I couldn’t see the outcome, so I’m really relieved to get in without anything going bad. Mentally it was very difficult, tactically very difficult… It’s one of the toughest legs I’ve done.” 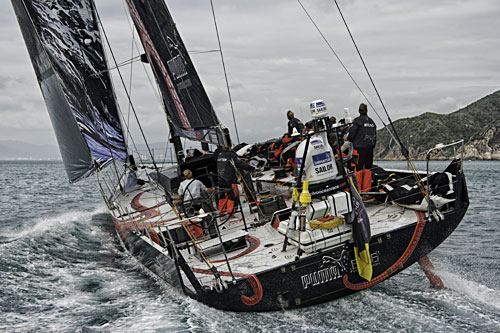 Crossing the line, Groupama skipper Franck Cammas said the result had once again boosted confidence on the French boat.

“I think we did good work on the first two legs without seeing a result but now we’re seeing results. For sure the confidence is high on Groupama 4 now.

“The last few days were very hard for the crew. There were lots of manoeuvres, we tacked about 25 times in the last 24 hours in rough seas which was very tough on the crew. It wasn’t easy but the result was we got second place.”

Telefónica´s latest victory was remarkable given the damage they suffered to their code zero sail just hours after the start in the Maldives, a setback that pushed them into last place. After completing a repair job overseen by Jordi Calafat, Telefónica made the strategic decision, along with CAMPER with Emirates Team New Zealand, to take a hitch to the north.

By day four, the damaged sail was hoisted and Telefónica rose up the order by seven miles to fourth place. On January 26 on day five, Telefónica overtook both Groupama and CAMPER to take the lead – a lead that they would not relinquish over the final week of racing.

Telefónica faced a major test on day eight with both Groupama and PUMA in close chase, but Olympic gold medallist Martínez kept a cool head and by that evening they were leading the fleet to the open waters of the South China Sea.

Telefónica then held off a spirited charge from Groupama again on Day 12 off the coast of Vietnam and extended their lead to the finish line for the win, not only claiming a third victory, but making history as well.

Hundreds of fans flooded to the Sanya Race Village prior to Telefónica’s victorious arrival to help celebrate the official opening ceremony. A colourful array of fireworks exploded overhead as several local dignitaries addressed the crowd. It is the second consecutive time that the Volvo Ocean Race is stopping in China.

The In-Port race in Sanya is scheduled for February 18 with the Leg 4 Start to Auckland, New Zealand, coming one February 19.