PUMA’s Mar Mostro is powering at breakneck and fast closing the more than 200 nautical mile gap with leg leaders CAMPER.

Ken Read’s PUMA Ocean Racing powered by BERG team appear to be reaping the benefit of their radical northerly route that has seen them much closer to Japan in the north than the rest of the fleet. 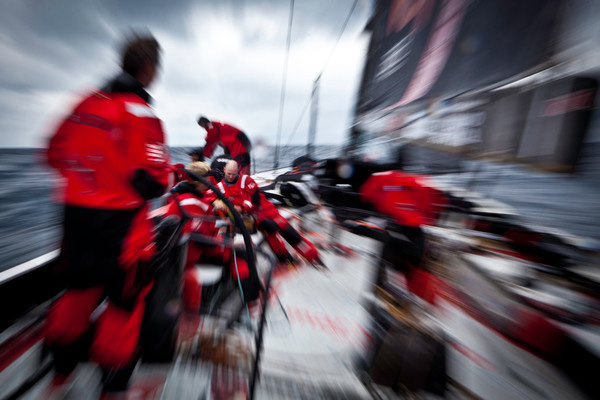 An increasing boat speed in excess of 20 knots has enabled PUMA to close the gap between leaders CAMPER with Emirates Team New Zealand from more than 270 nm last night, to around 190 nm at 1000 UTC on Saturday morning.

But, weighing heavily on the minds of the crew is the possibility that the northern play will not pay, Media Crew Member Amory Ross reported from on board Mar Mostro today.

“We’ve already suffered the familiar weight of going it alone, and while we never once wrote ourselves off, and are very much poised to pounce on the guys to our south, the threat of losing big still looms large,” he said.

“In that sense, looking at the position chart can be intimidating, but we very well know now how quickly deficits can be erased with the right conditions and a little bit of patience.”

CAMPER skipper Chris Nicholson and navigator Will Oxley are spending hours on end at the nav-station deciphering the weather reports and picking what they hope will be a winning track to their homeport.

Overall leaders Team Telefónica are about 60 nm behind the leaders in fifth place.