TELEFÓNICA WILL START LEG TO AUCKLAND AHEAD, AFTER PUMA HIT TROUBLE; RESTART SCHEDULED FOR MONDAY MORNING IN SANYA 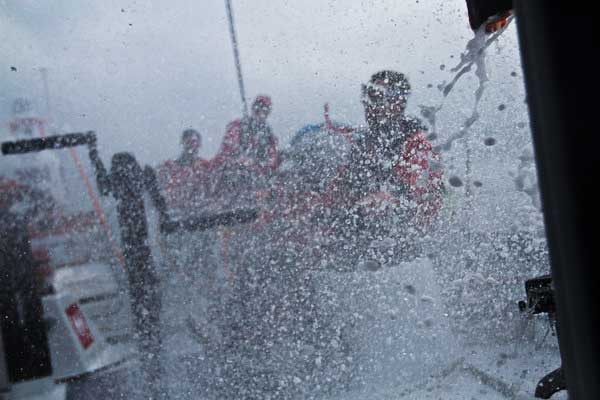 Sanya, China – Overall race leaders Team Telefónica will enjoy a head start on their rivals when Leg 4 restarts on Monday after the Spanish team finished Sunday’s sail more than two minutes ahead of their nearest rivals, Groupama sailing team.

Sunday’s racing, which marked the official start to Leg 4 from China to New Zealand, was cut short by race organizers who made the decision late Saturday night to contest only a 40-nautical mile sprint and keep the boats in Sanya overnight until Monday as a safety precaution.

A weather system that includes winds over 40 knots and waves reaching 8 metres in height is forecast for the South China Sea on the route to Auckland early in the week and the delayed start lowers the risk of boats hitting monsoon-like conditions and a dangerous sea state.

It is the first time in the 39-year history of the Volvo Ocean Race that the race has suspended or delayed off-shore racing.

The race re-start is schedule for 0700 local in Sanya on Monday morning (2300 UTC) and will be staggered in the same order of finish based on Sunday’s sailing times.

Iker Martínez’s Team Telefónica finished front of the pack again on Sunday after dominating Saturday’s Sanya Haitang Bay In-Port Race one day earlier. Groupama followed them into Sanya’s marina 2 minutes 32 seconds behind, coming back after a mistake at the start line, while Abu Dhabi Ocean Racing also clawed their way back from last place during the day to cross the line in third.

The biggest shock of the day was on board American-entry PUMA Ocean Racing powered by Berg, when their lead of more than a mile disappeared completely after sailing into a windless area shortly after starting the return stretch back to Sanya. They finished a massive 39 minutes 17 seconds back and will be the last boat to start Monday morning in the re-start.