After more than 1,000 nautical miles of ocean racing on the second stage of Leg 3 to Sanya, just five miles separated the top four boats as they entered the feared Malacca Strait on Friday.

After taking the lead late on Thursday, Iker Martínez’s Team Telefónica rounded Pulau We island narrowly ahead to lead the fleet into one of the world’s busiest and most hazardous shipping routes.

On the approach to the island, Telefónica held off sustained attacks from Chris Nicholson’s CAMPER with Emirates Team New Zealand and Ken Read’s PUMA Ocean Racing powered by BERG after the leaders had picked their way precariously around the rocky northern Sumatran coast.

Telefónica and CAMPER traded tacks constantly on the 25 nautical mile section against the wind to Pulau We, all the time stalked by PUMA just behind.

As the leading pack began to round Pulau We, PUMA snatched second place from CAMPER when Read cut the corner and emerged ahead of Nicholson who had taken a more offshore route in search of better winds. When the boats crossed again just minutes later, however, CAMPER had struck back to reclaim second place. 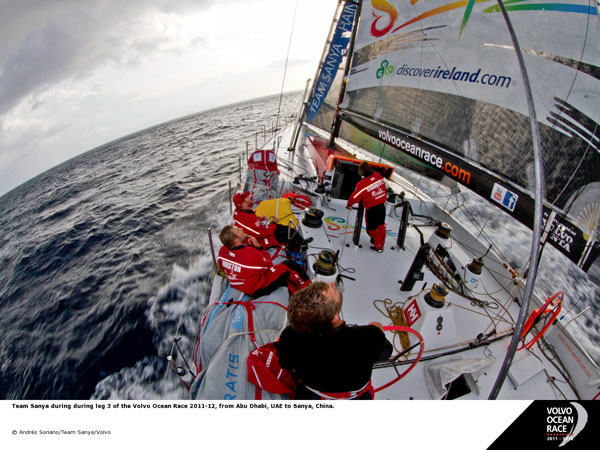 Franck Cammas’ Groupama sailing team rounded Pulau We in fourth place, still within sight of the leaders and very much in a position to pounce during the 500 nm passage through the strait.

“The strait promises to be a real minefield of opportunities and losses,” said Groupama bowman Brad Marsh. “Like the game of snakes and ladders, one wrong move will drop you a long way back and one lucky move will make you look famous.”

Ian Walker’s Abu Dhabi Ocean Racing and Mike Sanderson’s Team Sanya were set to enter the Malacca Strait later on Friday. Both have hopes of the fleet compressing in the strait and getting them back in the mix.

PUMA began to make gains when the leaders passed close to the northern tip of Sumatra. According to navigator Tom Addis, PUMA were so close to land that he moved from his nav station to get a better viewpoint.

“I was on deck looking at the chart and it actually had us going over land for a couple of minutes,” he said. “So yeah, I would say we were in pretty close there.”

Addis said there would be plenty of other challenges for the fleet before they exit the strait, including the possibility of having to anchor to avoid being swept backwards by strong currents.

“There are so many factors it is hard to prioritise them,” he commented. “There’s plenty to hit, sandbanks and wrecks, the weather is really unstable and through all of that you still have to rest so you can remain sane and make good decisions. It’s the full package really.

“In the middle section the currents are a bit weaker but there is a chance we will have to anchor — anything to stop you going backwards. We have our anchor and a plan for quickly putting it in place.”

“We’re going to be guided tonight by what the other boats do,” he said. “It’s not going to be a very peaceful few days. First, because of the shipping and the narrow channels, and secondly because we have three boats in very close company.

“The boat that pops their nose out in front at the other end of the strait will probably be in the best position from there to the finish. It’s about 500-odd miles to Singapore so I’m getting prepared for not much sleep.”

For five of the teams, 80 percent of the points for Leg 3 are at stake on this second stage, which began in the Maldives on Sunday and will take the fleet over 3,050 nm to Sanya, with an estimated finish of around February 5-6.

Team Sanya, sailing towards their home port, will score full Leg 3 points for the stage after being unable to take part in Stage 1 because of a rigging problem.