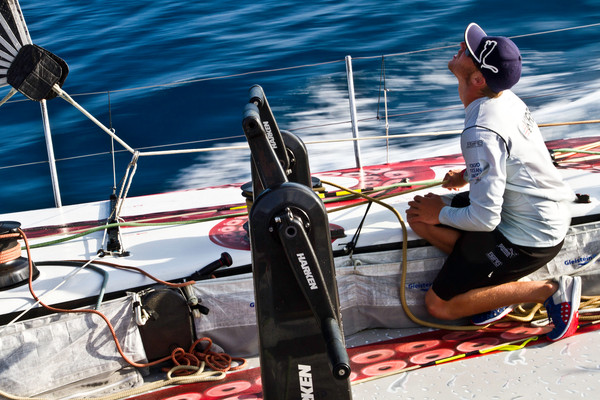 PUMA skipper Ken Read launched a surprise tactical gamble on Wednesday that could take the Leg 3 fight all the way to the wire, with the American taking his team offshore just as Telefónica led the main fleet towards the coast of Vietnam.

In a calculated risk taken with the team’s need for points in mind, Read defied conventional wisdom by investing in a position around 150 nautical miles to the east of the fleet as the race to Sanya in China enters a fraught final phase.

The move relegated PUMA Ocean Racing powered by BERG to fifth in the leg standings with less than 800 nautical miles to go as the rest of the leaders headed north towards Vietnam, the more traditional route.

With the other teams preparing for a 35-knot upwind battering, PUMA were banking on kinder winds, less tide and a better sea state to put them in contention for their first leg win. Success in the leg would also see them make vital gains on the overall race leaderboard where they currently lie in fourth place, 35 points behind Telefónica.

“There’s only three days left, only 800 miles left. We had two possibilities: one going up the coast of Vietnam hard on the wind and against the tide, and the other going further east and coming in to Sanya on a better angle with favourable current. It was a really tough decision to make for the navigator and skipper but this is the course we’ve chosen and so now we’re hoping it pans out for us.”

Swain said it would only be clear whether their move had worked in the dying moments of the leg.

“It’s going to be nail-biting,” he said. “It’s very stressful on board because we’re not seeing gains straight away.”

At the front of the pack, Groupama sailing team continued their persistent hounding of Team Telefónica, which saw them at times get to within one mile of the leaders.

“We were so close to overtaking Telefónica at least three times,” said Groupama helmsman Erwan Israël. “It really was a matter of one metre. This race is of incredible intensity — each metre is crucial. We gave everything.

At 1300 UTC the gap between the leading pair was up to seven nautical miles, but Israël said their fight was far from over.

“Now the game is more open,” he said. “The racecourse is larger and the boats are going in every direction. That’s offshore sailing. We are on the western side and are looking forward to see what happens next.”

CAMPER with Emirates Team New Zealand moved up to third place closing the gap to Telefónica to less than 40nm. Co-skipper Stu Bannatyne said his team, well trained in heavy weather upwind sailing, were waiting for their moment to strike as the finish line neared.

“Hopefully we can just chip away and gain a bit here and there and get close enough for a crack on the final sprint in to the finish in Sanya,” he said.

Ian Walker’s Abu Dhabi Ocean Racing faced a nerve-wracking 48 hours as they sailed into tough conditions akin to those which saw their yacht Azzam dismasted within six hours of the Leg 1 start.

“I would be lying if I said I was not worried about our mast and rigging, but all the signs are that things should be OK,” Walker said. “The big test will be when we go for the heavy weather jib and two reefs in the mainsail for the first time in anger since stepping this spare mast back in December.”

Team Sanya were just over 250nm behind the leg leaders at 1300 UTC having pulled back two nm in the three hours prior to the report.

“We would love to pick off a couple of boats and we are always looking for opportunities back here,” said watch captain Richard Mason. “In reality that would mean a breakdown or gear failure on one of the other boats. This morning we had our bowman up the rig checking all the fittings ahead of the heavy weather. There’s a point at which you stop racing and start surviving and that’s about 35 knots.”

Team Sanya will receive full Leg 3 points when they finish at their home port, as they were unable to take part in Stage 1 because of a rigging problem, while the other five teams who successfully completed the first stage of Leg 3 will receive 80 per cent of the points for completing the second stage.