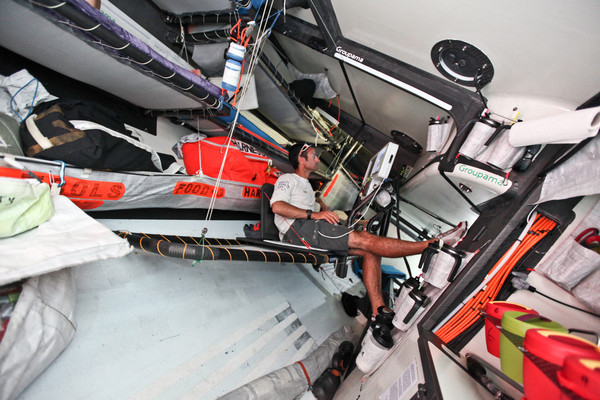 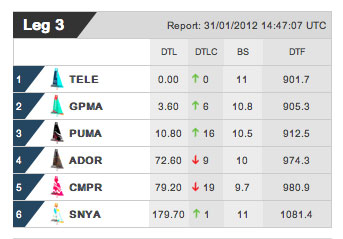 Team Telefónica were fending off relentless attacks from Groupama sailing team on Tuesday, clinging to the lead as the fleet continued the race through the South China Sea.

Groupama’s persistence took them to within four nautical miles of Telefónica, the overall race leaders, at 1440 UTC, with PUMA Ocean Racing powered by BERG a lurking presence 11 miles behind the frontrunner.

“It’s going to be tight with Groupama,” said Telefónica’s Australian navigator Andrew Cape. “They’re a good team and very hard to get rid of.”

The teams, relieved to be out of the Malacca Strait, were sailing against the wind towards a final landfall prior to what looks set to be a straight-line slog over 500 nm to the Vietnamese coast on their way to the Leg 3 Stage 2 finish in Sanya.

On their way to China, the fleet must leave a large archipelago 150 nm off the eastern coast of Malaysia on their left.

Cape’s opposite number on Groupama, Jean-Luc Nélias, said the fight was too close to call with such a long way to go.

“Ridiculous this lead in view of what lies ahead,” he said, adding: “We are still happy to be where we are.”

Some 80nm astern, Chris Nicholson’s CAMPER with Emirates Team New Zealand lived up to their reputation as being fast upwind, revelling in the 15 knot north easterly winds to position themselves to the east of Ian Walker’s fourth-place Abu Dhabi Ocean Racing.

Abu Dhabi watch captain Robert Greenhalgh said he expected opportunities to open up in the gale force winds and big seas expected in the next 24 hours.

“As the breeze builds things may well even up,” he said. “Once the wind’s up above 25 knots and the sea state builds, it’s anyone’s game.”

After a difficult passage through the Malacca Strait section, which saw them drop to over 179 nm from the lead, Mike Sanderson’s Team Sanya were the last boat to exit the Singapore Strait.

Sanya passed the Horsburgh Lighthouse and joined the rest of the fleet in the South China Sea at around 1400 UTC today.

Revised estimations now suggest the leading boats could complete the second stage of Leg 3 to Sanya as early as February 4.

Team Sanya will receive full Leg 3 points when they finish at their homeport, as they were unable to take part in Stage 1 because of a rigging problem, while the other five teams will receive 80 per cent of the leg points.