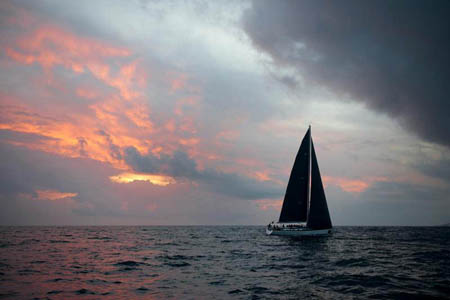 A great race draws to a close

The pontoons at the Royal Malta Yacht Club were full yesterday with crews from the Rolex Middle Sea Race fleet busily reloading gear and fresh supplies onboard — and heading off for deliveries back to home ports throughout Europe. Malta’s location at the crossroads of the Mediterranean enables the race to draw from a diverse fleet which this year comprised 70 boats from 16 countries.

As of midday Friday, 65 boats in the Rolex Middle Sea Race had finished, four had retired, and one boat, Skipperclub was still racing.  At 16.00 the Russian boat was off Lampedusa on a somewhat lonely last 100-nautical mile leg to the finish.

The race has always drawn an interesting mix of the top maxi racing boats. This year’s crop included the 100-foot maxi Esimit Europa 2 (SLO), J/V 72 Rán (GBR), and the Mills 68, Alegre (GBR) , as well as well-sailed racers and racer-cruisers, often with family and friends as crew. This year’s conditions favoured the smaller boats for a change. In fact, in the top ten overall, all of the boats are under 45 feet, the sole exception the 72-foot Rán. The local Maltese fleet, though smaller than in recent years, did well with four out of the top five overall from Malta – including the overall Rolex Middle Sea Race winner, the J/122 Artie, co-skippered by Lee Satariano and Christian Ripard.

Recap of the race

One overriding theme amongst returning competitors was how far off the weather forecasts were this year, the true conditions the result of local weather systems that developed during the race. As Alegre’s tactician, Francecso de Angelis, said before the race, “I think it will be a very difficult race because apparently there are three fronts going through. There will be big shifts in wind direction and times when the wind will be very light.”

The race start in Grand Harbour was dramatic as ever with four class starts, and a line from the Saluting Battery beneath Upper Barrakka Gardens across the harbour to a buoy off the historic Fort St. Angelo. The jockeying to get out of the harbour cleanly was as competitive as ever. The fleet raced down the coast to a turning mark off St. Julian’s, where they encountered much stronger breeze than expected, as a passing front rolled through resulting in torn sails and other minor damage.

The 50-nautical mile reach across to Sicily and the leg up to the Messina Strait is where many of the competitors later reported making gains – or losing ground – to the rest of the fleet. This year many of the boats that sailed a course further east, off the Calabrian coast had the best luck, while others struggled off Catania in the shadow of the active Mt. Etna, which only a day later would erupt angrily enough to close temporarily Catania airport.

As always, getting through Messina with a favourable current was key, a feat that frontrunner Esimit Europa 2 managed before taking advantage of the better breeze north of the Strait to get a big jump on nearest competitor Rán and the rest of the fleet. Alegre struggled to get through Messina, but once clear found some pressure and managed to gain back some distance on Rán. Alegre’s navigator Will Best reported, “We’ve got until Trapani to claw anything back that we can against Rán, and then after that its pretty much a drag race home.”

Most boats gave Stromboli the usual wide berth, especially this year as the breeze went light. The bigger boats used their greater mast height and superior sail power to eke out just enough speed to keep moving. The Volvo Ocean Race and America’s Cup veteran, Juan Vila, navigator on Esimit Europa 2 reported his technique, “We managed to find some clouds, and so we were jumping from cloud to cloud to find the breeze.”

Back in the fleet, a number of boats seemed unable to find those same clouds, as many reported parking up or extremely slow going along the northern coast of Sicily. One or two boats proved the exception, the Ker 53 Dralion (MLT) for example, took a more extreme course north where they found breeze. German owner/skipper Pit Finis said they gained by going much further north than others after Stromboli. Finis reported, “It felt like we were sailing halfway to Sardinia, but we met another system with thunderstorms which took us west quite quickly. It was quite a helpful run; we were in a quite good position after that.” Dralion would go on to win Class 2.

Once past the eastern tip at San Vito lo Capo, there was breeze again, this time a strong southeasterly meeting the yachts at Favignana. Esimit Europa 2, followed nine hours later by Rán stuck their bows around the corner and took off. Rán reported, “We are now back upwind in 16.5 knots of wind, sailing at a speed of 13.5 knots. Rocky and fast is the description of the experience. Hold on and strap yourself in!”

For the smaller boats, their slower progress meant they were often sailing in a completely different weather system than the big boats. By the time the middle of the fleet arrived off Favignana, 12 hours after Rán, conditions were rapidly changing, with some boats experiencing local squalls and thunderstorms that quickly backed the wind direction from southerly to northerly. The Maltese boat, Comanche Raider II was the first retiree, out with rudder problems, while Otra Vez, also from Malta, broke their bowsprit, but was able to carry on.

Co-owned and co-skippered by Aaron and Edward Gatt Floridia, Aaron described the conditions off Favignana, “The wind picked up, we were on a code zero which was pushing it, and we were doing very good speeds. Eventually the tackle went, and the bowsprit ran back, collapsing the bulkhead, so obviously we couldn’t use the pole. But we managed a repair. Then we had a very good run to Pantelleria.

Otra Vez would go on to finish the race 3rd overall, which was an achievement given that the boat was brand new to the crew, having only been purchased and shipped from America less than two months before. Though pleased with their performance, there was room for improvement. As Aaron Gatt Floridia continued, “The beat to Lampedusa is where we should have done better – we didn’t point high enough. We felt we were doing well, but obviously it wasn’t enough. But I think one of the reasons we did well overall is that we had our sights on Artie. We pushed ourselves really hard to keep up to them; I think that helped. In the end, the results were good for us, they were better than expected!” 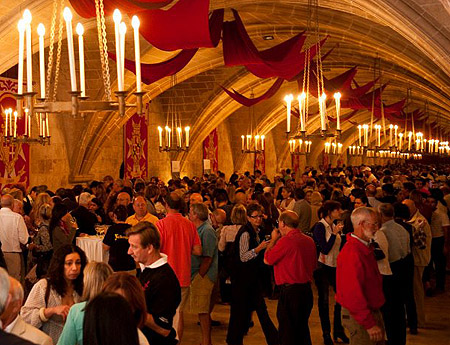 The 75-nautical mile leg to Pantelleria would bring the most wind of the race: 20-25 knots and a big, lumpy sea to give all competitors a proper offshore bout. Once around the rocky island, it was a beat to Lampedusa, 80 nautical miles away.  Esimit Europa 2 encountered rough seas on this leg, breaking a running backstay, but they were one of the few fortunate enough to carry the breeze through to the finish in Marsamxett Harbour.

Most of the bigger boats managed to get around that part of the course with wind, but the back third of the fleet would find the leg to Lampedusa challenging as the wind went lighter. From onboard the Maltese Grand Soleil 40, Aziza, skipper Sandro Musu reported, “We’ve enjoyed every wind condition from zero to thirty two knots, from every direction, rain and now sunshine.”

On Wednesday, several competitors ran into wind holes on the leg from Lampedusa and approaching Gozo and Comino. For some, such as Chris Opielok’s, AOC Rockall, it would be a make or break point. The Corby 36 had, until then, been in strong contention with Artie, for the overall win. But a park-up ten miles from the finish line would squelch those chances. At the time, Opielok emailed from the racecourse, “We’re really enjoying ourselves, it’s the first time we’ve raced this race. It’s a huge part of the experience. It has been great fun, we’re still battling it out, I can tell you; but I think we’re battling for second.” When AOC Rockall finally crossed the line that evening, it missed overhauling Artie by less than 30 minutes on corrected time. Still it was a great showing for the German boat’s first foray at the Rolex Middle Sea Race.

The lone double-handed team on Atame (ITA), Ian Knight and Beppe Bisotto finished on Thursday afternoon. The pair, who met on the yacht club’s online crew finder, were back this year and again seemed to relish the challenge of racing with just two. Their first Rolex Middle Sea Race they sailed with eight crew, but ended up short-handed after several became seasick. Bisotto said “These friends were very keen, but by the second day five of them crashed, so the next year I thought maybe we should just sail with two.”

The leg from the South Comino Channel to Marsamxett Harbour, featured mostly light conditions, for the later arrivals. After racing 600 plus miles, this last ten-nautical mile stretch was one of the most tactically challenging parts of the race for many, relieved only by the welcoming sight of the Royal Malta Yacht Club and the finish line.

By Friday morning, all of the fleet, save one, had managed to get themselves across the line. Among those tied up at the pontoon was Ko Labeij’ 55-foot Andrea (NED). The Dutchman, who lives in Istanbul, is owner and co-skipper of the sloop, built by Camper & Nicholson in the early 1970s. The yacht has its homeport in Bodrum, Turkey. Despite Labeij having sailed the 700-odd miles to Malta, he and his crew of friends are new to offshore racing. Labeij said with a wry smile, “We thought, ‘let’s go for it’. We were determined to do this race and we thought maybe we could contribute to this high-tech race in a different sort of way.”

Given the yacht’s 24-ton displacement, they came hoping for breeze, “We were expecting more wind, based on the past history of the race. Twenty-five knots is perfect for us, and 30 knots is okay for us. We can make some speed and are reasonably comfortable.”

Labeij continued, “Unfortunately, we had two huge doldrums, which for us, a 24-tonner, was killing us. But we enjoyed it. We had a good run from Favignana to Pantelleria, it was extremely nice, but then we hit a hole and stopped completely. In the end, we got enough breeze to finish.” Labeij summed up a common feeling of many competitors, “All in all, it’s a perfect race — a good spirit, and extremely well organized.  Nice people here, Georges (Bonello DuPuis, the Royal Malta Yacht Club Commodore) is a fantastic guy who keeps the spirit high. Maybe we’ll come back again!”

The final prize giving is at 12.00 CEST on Saturday, 29 October at the Mediterranean Conference Centre in Valletta.