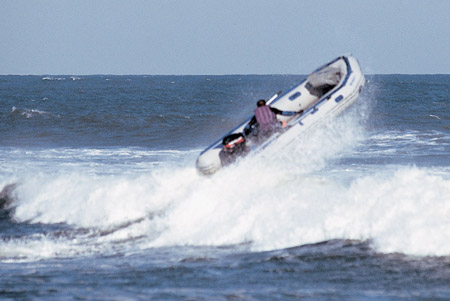 It’s one of the reasons we sail – for the excitement – but there are times when you’d rather not have to battle those Head Seas. Here we look at four ways of reducing the Slam and Bam!

A sharp narrow hull will sink deeper into the water than a wider flatter bottomed boat and so slow down slower instead of fetching up abruptly. If you have minimal dead-rise, heel it over using trim tabs or by shifting weight. This presents a sharp, narrow corner to the waves so the ride is better but wetter!

The opposite is the case for boats with deeper-V shaped bottoms. Keep the boat level and the deadrise works for you and you get the softest ride. But some high-rise deadrise hulls can actually lean into the wind – if this happens, instead of riding a sharp-V section, you are riding the flatter panel between keel and chine. You could alter course so that the wind is no longer abeam but in reality it is more realistic to shift your weight or use tabs to keep your boat on its lines.

In large swells you can achieve a smoother ride by bearing off a few points a few points instead of hitting the wave crests head on. Crossing on your hull supported as you go over the crest, allowing the boat to ride, rather than fall, down the back side. This zig-zagging cost time but a longer softer ride often beats a shorter, rougher one.