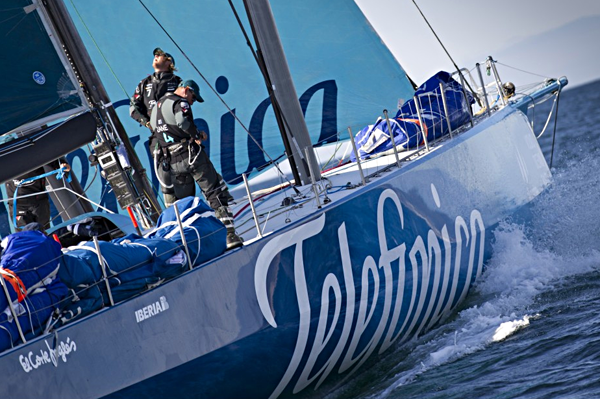 “The Spanish boat will be the first of the entries in the Volvo Ocean Race fleet to reach Alicante, ready for the final stage of their round the world preparation

Following 18 days at their training base at Sanxenxo, Pontevedra on the Northern Spanish coast, this morning “Telefónica” set course for the Volvo Ocean Race starting port: Alicante. The boat skippered by Iker Martínez now kicks off her final phase of training ahead of the round the world challenge, and with just 42 days to go until the start of the competition, the Spanish crew will be the first to reach Alicante for the final sprint to the start.

“Off we go! Thank goodness, because if not we’d be rolling out of here!,” joked Martínez, a nod to the excellent Galician cuisine. “Here in Sanxenxo we’ve done really well. We’ve worked well here, with all of the services the port offers, not to mention the great conditions for training found here. You always have to focus ahead and now we are definitely all looking forward to starting the regatta.” The fact that the crew are heading for Alicante is a sign that the moment for that is drawing ever closer.

Inside an unusually empty sail marquee, with everything tidied up and most of the shore crew already on the road or in the air en route to Alicante, the crew got together this morning to go over the final details of the sail to Alicante, where they’ll be returning having left the port on May 17th.

Skipper Iker Martínez reminded everyone that these about 840 miles to Alicante will be the last ‘long distance’ sail ahead of the start, which is why it’s crucial that everyone pays maximum attention too every minute detail on board. “If we see something that we think we might need to change or improve, then now is the time to do it.” That’s because this will be the last chance for the crew to really study the sailing and handling before the start.

Each person in charge of the particular areas also ran through the final notes that needed to be shared with the crew: Pepe Ribes talked about the batteries and systems, Neal McDonald commented on the mast, Jordi Calafat spoke about the sails to be used for this sail and Navigator Andrew Cape ran through the weather forecast with everyone… And there was a final warning: to take care when moving on board to avoid any injuries.

A farewell for sailing colleagues

This weekend the Real Club Náutico de Sanxenxo hosts the most important regatta on its calendar: El Corte Inglés Máster, with over 200 entries. “Telefónica”‘s departure from the port coincided with the cruiser fleet’s sail out to the racing course, with more than a few greetings and shouts of support for the Spanish boat and her crew. Among the fleet was Pedro Campos, Team Telefónica’s CEO, who is competing in the regatta as skipper on board “Movistar”. There’s no doubt that this was a great display of camaraderie among sailors and the Volvo Open 70 sailing alongside the cruisers made for a beautiful sight along the Pontevedra estuary.

Arrival at Alicante: between Tuesday and Wednesday

Forecasts for the Spanish team indicate that for the length of the Portuguese coast “Telefónica” will get Northerly breeze between 25 and 30 knots. With slightly less breeze, “Telefonica” pass through the Gibraltar Strait for the second time since she touched the water. After that she may come up against a patch of stormy weather towards Cabo de Gata in Almería. The final stretch towards Alicante is likely to throw up only light winds.

“Telefónica” and her crew are expected to reach the Port of Alicante between Tuesday afternoon and Wednesday morning. As always, the final say on that will lie in the hands of the weather…