Its quite something for a boat builder to announce the plans for a new yacht at one boat show, and present the finished model at another one, just a few months later.

But the Dehler brand, now part of the German Hanse stable have done just that after announcing the concept of the new Dehler 46 at the ” Dusseldorf Boot 2014″ in January this year, and now telling the world that the prototype is ready to sail, which must be an outstanding achievement in both development and production.

The unveiling ceremony for the new Dehler will be a key focus of the Yachting Festival in Cannes from 9 -14 September 2014, always a varied event with a number of premieres. 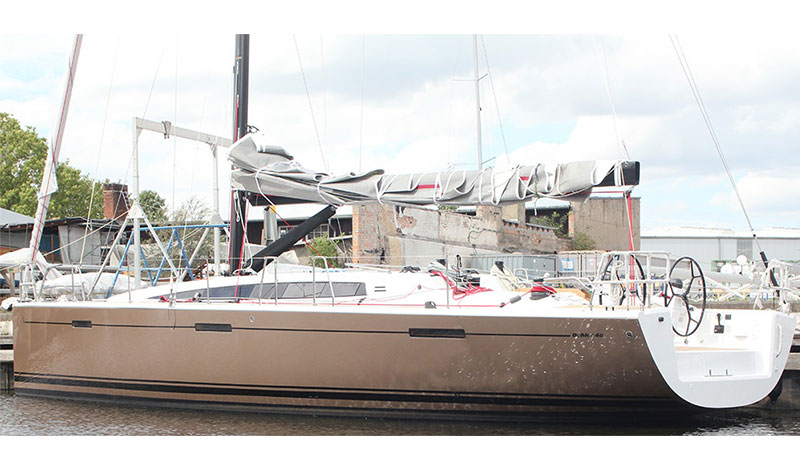 The Dehler 46 shines with a clear yet emotional-sporty design, innovative technology, outstanding variability and amazing sailing characteristics. With these qualities, Dehler is strengthening its reputation as a versatile performance cruiser with excellent characteristics for cruisers and sport-oriented sailors.

A number of clever details are apparent right away when touring the yacht. Everything has been thought of to make sailing and living on board a pleasant experience. This includes the wet room concept seen in the Dehler 38 with the UniDoor® in the owner’s cabin – a combination of openness, generous space and private sphere. One door with many functions: If the door to the owner’s cabin is closed, it is a traditional wet room with lots of space, light and air. If the door is open, the access to the owners cabin is free and the shower and WC area is closed, the floor runs through seamlessly and is therefore perfectly integrated in the cabin. Washbasin and WC/shower can be used independently of each other and offer future owners the desired privacy.

Although the prototype is now in the final stage, the jury responsible for choosing the “European Yacht of the Year” (EYOTY) have already announced their decision for this year’s nominations, and the Dehler 46, is one of the winners in the “Performance Cruiser” category.