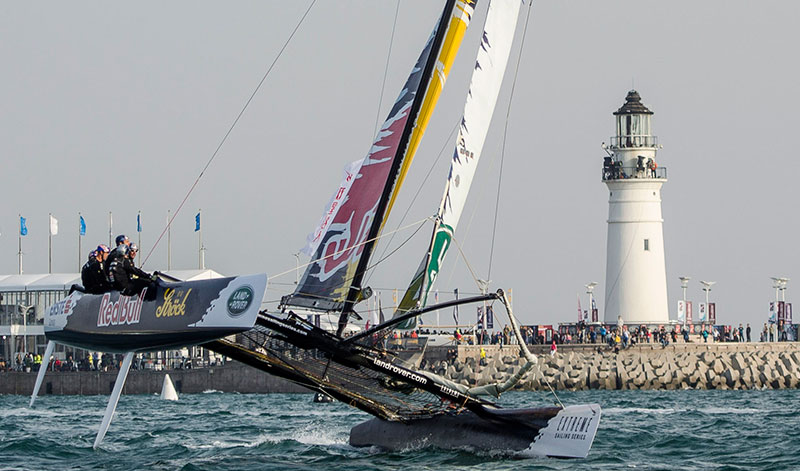 If it was the intention of the series organisers to bring yacht racing to a new level that captures the imagination of watching crowds and online video viewers, they certainly seem to have succeeded in the three events staged so far. And none more so than in ‘no holds barred,’ high adrenalin dual that took place during early May, in the former Olympic sailing city of Qingdao!

On the final days racing at the Land Rover Extreme Sailing Series™, Act 3 the city course lived up to its reputation as a notorious and unpredictable challenge even for the best sailors on the planet. It even had one of the biggest crashes in the Series’ eight-year history, that saw Red Bull Sailing Team T-bone Alinghi, and knock the Swiss out of racing. But this couldn’t stop the team of Morgan Larson, Anna Tunnicliffe, Nils Frei, Pierre-Yves Jorand and Yves Detrey.

Eventually they took the victory despite watching the final races from the dock, after the international jury awarded the Swiss boat a redress, to helmsman Larson’s great relief. On the final day, Britain’s sailing hero Sir Ben Ainslie and his crew showed the gold medal winning form that they have been struggling to find so far, with two race wins.

Between them they boast six gold medals, so have salvaged some pride at least by upgrading their position to eighth overall. Looking back on the week, and ahead to the rest of the season, Ainslie commented: “Every day there has been a completely new set of conditions to race in, the wind was always slightly different which made it a real challenge for all the teams. But, we feel like we are slowly making gains and moving forward, which is what we want to do to be in the top half of the fleet at the end of the season.”