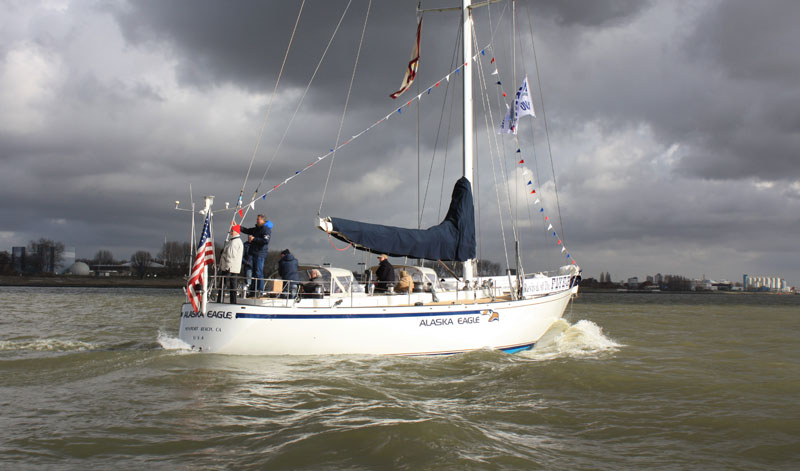 A popular highlight at the HISWA Amsterdam Boat Show held from 5th to 9th of March, was the presence of the historic racing yacht ‘Flyer’ which was made available at the show for public viewing.

The background to the yacht is intertwined with the memory of the famous Rotterdam born sailor Conny (Cornelius) van Rietschoten, who sadly passed away last December. Conny’s ongoing legacy in the Netherlands is assured due to his lifetime of sailing achievements, not least of which, was twice winning the Whitbread Round-the-World Yacht Race (now the Volvo Ocean Race.)

Conny won the 1978/79 edition of the race as skipper of Flyer-One (he had a second yacht of the same name built for his next win in 1981/82), and the first Flyer has her own place in the sailing heritage of The Netherlands, having been built by the famous Royal Huisman yard in 1974.

She is now under the ownership of a not-for-profit foundation, started by two dedicated Dutch sailing enthusiasts, whose objective is to have her refitted for competitive sailing again, and have her permanently preserved for the future as Flyer-One.

The originators of the Foundation, Diederik Nolten and Gerard Schootstra have extra encouragement in their project, having received an email from Conny before he died saying how pleased he was that they were bringing the yacht back to Holland.

Flyer arrived in Rotterdam as deck cargo on a bulk carrier in February after the foundation had purchased her from a sea school in Newport USA, where she had been renamed as ‘Alaska Eagle’. She is headed straight to the Royal Huisman yard after the HISWA show for a refit, which will include a new main mast, mizzen and an upgrade of all the deck fittings.

After that, plans include another appearance at the HISWA Amsterdam ‘In Water’ Show in June, and then to Alicante to join in with this year’s edition of the Volvo Ocean Race. The voyage from Holland to Southern Spain will be split into four legs and sailing enthusiasts will be able to buy a place on each leg for €500,00 with the knowledge that their contribution will be put towards the on-going maintenance of the yacht.