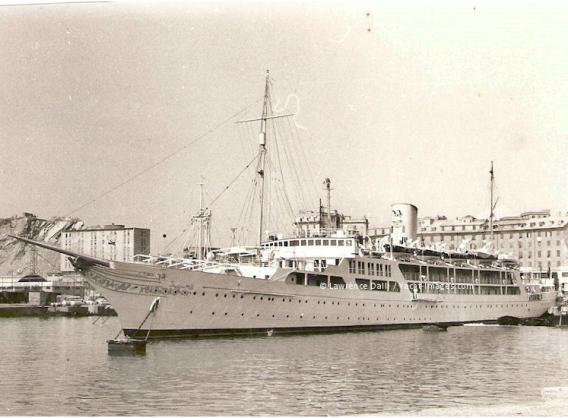 The tragic tale of the El Horria, still the world’s sixth largest sailing yacht. The story of this once majestic vessel shows all too vividly the decline in conditions in Egypt.

El Horria (originally called Mahroussa) was the Royal Yacht built for Isma’il Pasha, the Khedive of Egypt in 1865.

It was built by the Samuda Brothers on the River Thames and remained in service with the Egyptian royal family until 1951.

It had two significant alterations, being lengthened by 40 feet in 1872, with a further 16.5 feet being added in 1905. The 1905 rebuild was undertaken at the Pointhouse Shipyard of A & J Inglis in Glasgow, Scotland and included the replacement of its two paddle wheels with triple screws powered by steam turbines built by Inglis at their Warroch Street Engine Works in Glasgow. Inglis were one of the first companies to be granted a license by the Parsons Marine Steam Turbine Company, Wallsend for the construction of steam turbines in their own works.

In 1869, the Mahroussa gained fame as the first ship to pass through the newly completed Suez Canal as part of the opening ceremony.

After the abdication of King Farouk, it was taken over by the Egyptian government for use as a naval training ship, and was given her current name. It spent most of its career in the eastern Mediterranean, but did participate in the International Naval Review held to commemorate the bicentennial of the United States of America.

Wikipedia states that “Presently, the ship is cared for by the Egyptian Navy, and is occasionally used as a Presidential Yacht. The ship goes to sea about three times a year, usually for just a day.”

Having seen the pictures below from shipspotting.com I think it may be advisable to avoid that day!

Let’s hope that this once majestic vessel can be put to good use helping the Egyptian people.