The Volvo Ocean Race fleet headed out of Miami and straight towards a tropical storm on Sunday after making a slow start to Leg 7, potentially one of the most critical stages of the 39,000 nautical mile marathon.

With a gentle breeze blowing off Miami’s famous South Beach it was Ian Walker’s Abu Dhabi Ocean Racing, winners of Saturday’s PORTMIAMI In-Port Race, who lead around the six-mile course, although by the time of the 1900 position report overall leaders Team Telefónica held the slimmest of advantages. 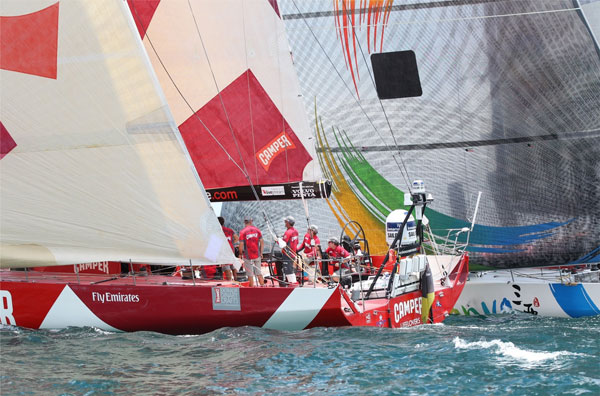 The boats were headed out into the North Atlantic where the first major obstacle they will face will be Tropical Storm Alberto, the first of the 2012 hurricane season, lying off the east coast of the United States and holding winds of up to 45 knots at its centre.

Points have never been more crucial as the race reaches a critical juncture with the 3,590nm leg from Miami to Lisbon, Portugal.

After more than six months and thousands of miles of extreme racing, Telefónica still lead with 165 points but Groupama are snapping at their heels just seven points behind on 158, while CAMPER with 152 and current form team PUMA on 151.

Following their Miami in-port win, their third of the inshore series, Abu Dhabi started the leg fired up for battle, while Team Sanya were relishing being back alongside their rivals after pulling out of Leg 5 with boat damage and sitting out Leg 6.

The formation of Tropical Storm Alberto may have put an end to the traditional route up the coast using the Gulf Stream as a catapult but it will reward the teams with fast sailing in decent breeze if they play it correctly. Get it wrong, and they could quickly find themselves in dangerous conditions.

Navigator Tom Addis, mastermind of PUMA Ocean Racing powered by BERG’s back to back leg wins, said the race to pick up the winds generated by Alberto could prove critical in the bid to get an early advantage.

“The storm is the source of pressure for us to get north and east on so it’s important to try to feed into that pressure first,” he said.

“You don’t want to be the wrong side of that low because the current against wind in the Gulf Stream would give quite a heinous sea state. It looks like there will be plenty of good downwind in the next leg, a reasonably fast leg, which we always enjoy.”

Abu Dhabi navigator Jules Salter said he hoped to use the weather system to fire them into the Atlantic Ocean.

“In some ways it’s quite good – it’s giving us some downwind conditions once we get up past Cape Canaveral and up towards Cape Hatteras so we’re kind of cutting the corner and probably sailing a more direct route that we would have done if the storm wasn’t there.

“It’s quite light for the first part of the forecast so it will be about finding wind in the first 48 hours. The closer we can get to it the better – it will give us a bit of a catapult out of the way.”

After the disappointment of finishing last in the PORTMIAMI In-Port Race, Telefónica navigator Andrew Cape said his team were looking forward to getting back to rediscovering the form which saw them win the first three offshore legs.

“We’re an offshore boat, an offshore team, and yeah, sure we had a bad day yesterday but that was yesterday and we’ll just get on with it,” he said.

“The fleet face a tricky first few hours of the race in light, unstable winds while trying to maximise the effects of the Gulf Stream,” he said.

“The first boat to reach the lower part of Tropical Storm Alberto will stretch their lead but the big question facing the fleet is how close to the centre of the system to go. Winds are forecast to hit 45 knots, which are no good for anything apart from breaking boats. This storm needs to be treated with plenty of respect.”

Leg 7 is expected to take around 11 days to complete.