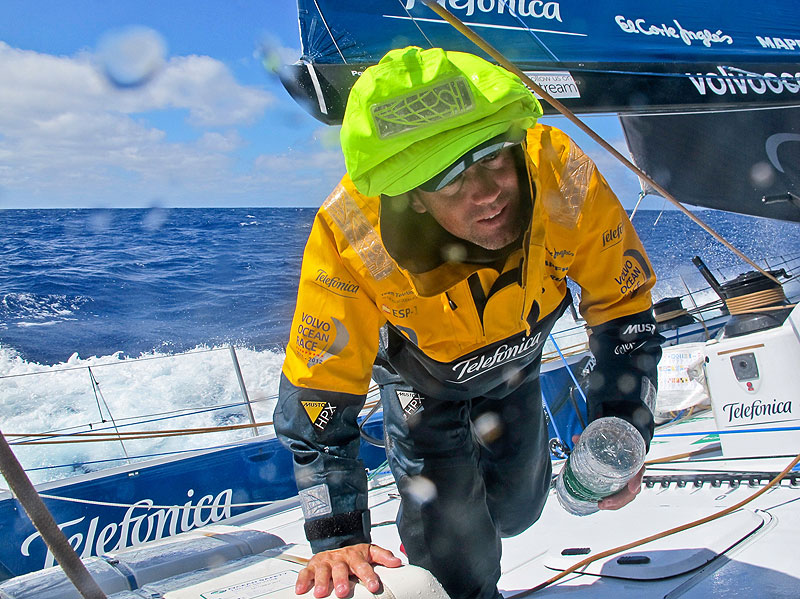 The top three teams overall in the Volvo Ocean Race 2011-12 remained locked together in a titanic struggle on Tuesday as the fleet slowed slightly on the way to the only Leg 8 turning mark — São Miguel island in the Azores archipelago.

At 1000 UTC Team Telefónica had nosed back in front of overall race leaders Groupama sailing team, after a night of dead heating for the lead, while within clear sight, in third, PUMA Ocean Racing powered by BERG remained a constant threat to the leading duo.

Groupama navigator Jean-Luc Nélias said the light wind zone stretching as far as São Miguel had slightly thrown the advantage back to Telefónica and compressed the whole fleet over the last 12 hours.

‘’The wind dropped down and we now are in very light winds,” he said. “We are 50 metres away from Telefónica, we can see PUMA and on the horizon we can also see Abu Dhabi and CAMPER.

‘’Our speed advantage over on Telefónica has reduced as the wind got lighter — we were faster yesterday in stronger winds. We managed to equal their speed last night but slowed down a bit today.”

However, by 1300 UTC Groupama were back in the lead pulling out a 2.1 nautical mile (nm) advantage on Telefónica after positioning themselves to the north in a strong position to cover the fleet on the remaining upwind section to São Miguel.

PUMA remained in third, five nm off the lead and three nm ahead of fourth placed CAMPER with Emirates Team New Zealand. Four nm back, Abu Dhabi were in fifth, with Team Sanya in sixth, 17 nm off first place.

PUMA skipper Ken Read said the competition for the top three places had been intense since leaving Lisbon on Sunday.

“It is certainly close,” he said. “Groupama and Telefónica are a couple of miles away. It’s all on, that’s for sure.”

Despite the unrelenting pressure, Read said the PUMA crew were treating the penultimate leg like any of the previous seven in this edition of the race.

“To be honest, it’s not affecting the crew,” he said. “We’re doing a completely normal watch system and treating it like any other leg right now. Tom (Addis, navigator) is at the computer and the guys on deck are just doing their job.

“So far the three of us have been glued to each other the entire leg, but hopefully these guys up ahead get caught up with each other and take their eye off us for a little while, we’ll see,” Read said.

Although currently fixated on finding the fastest path through the light airs of the high pressure, the fleet’s navigators are also keeping a wary eye on a potent low pressure system lurking to the north west which could deliver a fast run from the Azores to Lorient if tackled correctly.

“We think this leg is still going to be won or lost on the other side of the island,” Read said. “It’s a question of who can deal with the big breeze best — and who can not break in the mean time.

“It’s going to be a big one and we’ve got to get ready for it,” confirmed Telefónica navigator Andrew Cape. “We have to reach into it to get more wind and the best course to Lorient.”

Needing to beat Groupama by two places to regain the overall lead, Cape said the Telefónica crew know they may have to push harder and take more risks than their French counterparts.

“Certainly the probability of breakages is the same for everybody and no one is going to be the first to take their foot off the pedal,” he said.

“We’re all going to go quite fast and it will be a tight race because no one will want to slow down — although sometimes you might have to.

“It will be a very interesting aspect of this leg: just how much risk will be taken.”

Latest estimates suggest the boats will round the Azores waypoint in the early hours of June 13 on the way to the Leg 8 finish in Lorient, on the Brittany coast of France.