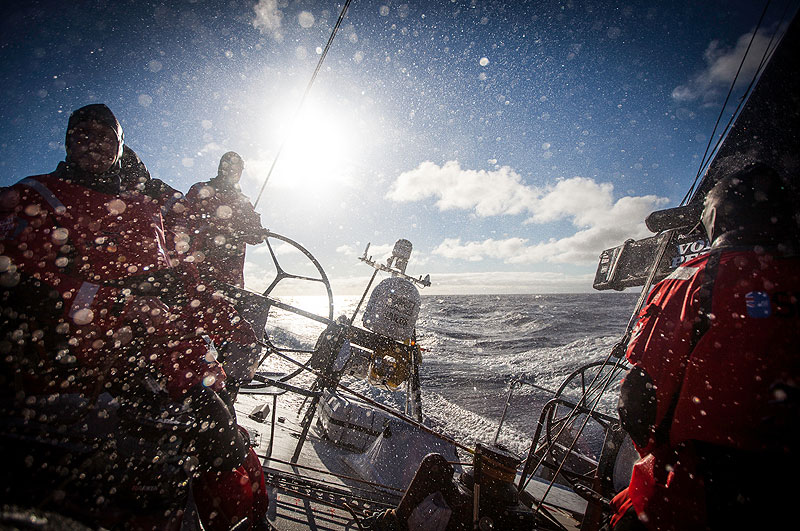 Telefónica’s bid for redemption and the return of their overall lead was well underway on Monday with the Spanish team leading the Leg 8 race to Lorient, France, though the sight of current race frontrunners Groupama on their shoulder will be a sobering thought.

At 1300 UTC Iker Martínez and his men, who won the first three offshore legs but have since slipped, held a narrow 1.1 nautical mile lead over Groupama following the first 24 hours’ racing towards the turning mark of São Miguel island in the Azores.

PUMA Ocean Racing powered by BERG were in third place followed by Abu Dhabi Ocean Racing and CAMPER with Emirates Team New Zealand, while Team Sanya rounded out the fleet on a more southerly course more than 26 nm behind.

Groupama lead Telefónica by eight points with two offshore legs and two in-port races to go in what is turning out to be the closest ever Volvo Ocean Race. PUMA are in third, 13 points off the lead, with CAMPER a further 10 points back. With 30 points going to the winner of each of the remaining offshore legs, there is still plenty of scope for lead changes.

Telefónica trimmer and Olympic gold medallist Xabi Fernández said the team were revelling in their return to a position at the front of the pack after a difficult run, but were under no illusion about the battle to come to remain there.

“We are still second overall and everything is still in our hands,” said Fernández. “The only thing we can think about is to keep pushing, try to do a very nice leg and get back in the lead as soon as possible.”

Fernández said the team had more to worry about than just Groupama, with third overall PUMA currently in third place and within sight on the race course.

Adding to the pressure is the knowledge that the fleet will compress as it nears São Miguel, which is situated in a notoriously windless area in the middle of the Azores High.

“You are always nervous when you go into a zone with no wind,” Fernández said. “We will have a very hard 24 hours maybe tomorrow or the next day. It’s clear that the first one going out of the light air is going to be the winner, or have a lot of chances, so we have to fight hard in the light air conditions.”

Groupama are not only looking to defend their hard fought overall lead, they are also vying for an opportunity to race into their homeport of Lorient in first place.

Groupama Media Crew Member Yann Riou today reported that his team were focused on capitalising on the fast reaching conditions for which his team are famous for being quickest of the fleet.

“Of course it’s a bit of a special leg on different levels,” Riou said. “Its format is a bit different in terms of length, there is a lot at stake and we don’t forget that this is bringing us home.”

The game will change on Tuesday once the teams round São Miguel and switch from reaching to running conditions in a powerful low-pressure system that promises gale force winds in excess of 40 knots.

Abu Dhabi navigator Jules Salter said turning the corner could be likened to a second start and the race would again become wide open.

“It is going to be pretty exciting to see how we play that low and close we go to the centre of it,” he said. “That will probably decide who wins this leg.”

The latest ETA for the fleet’s arrival in Lorient, France is on Friday.