After watching the hugely successful Thames River Pageant yesterday, the people of Gibraltar were buoyed with vast amounts of Jubilee enthusiasm for their very own Flotilla around the Rock.  Organised by Ocean Village Marina, the 160-strong convoy was resplendent in red white and blue flags and was an inspiring end to the British territory’s Jubilee celebrations. 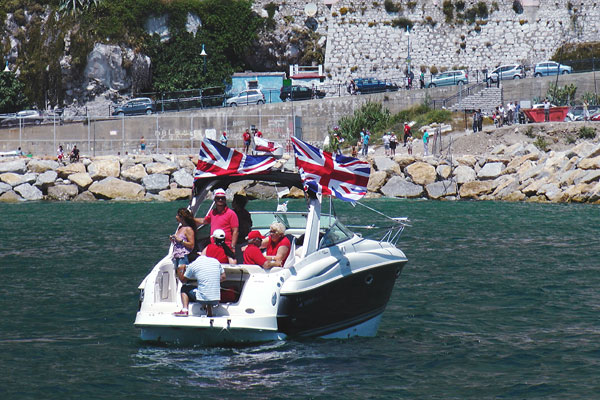 Governor of Gibraltar, Sir Adrian Johns, himself a former senior officer in the Royal Navy, was at the start of the event and wished the Flotilla a safe and enjoyable journey.  Referring to yesterday’s rather damp and dreary weather in London, he said that all people had to worry about in Gibraltar was bright sunshine with temperatures peaking at 28 degrees.  He was unsurprised by the huge turnout of boats and land-based spectators saying “Gibraltar knows how to celebrate and I am there with them.” 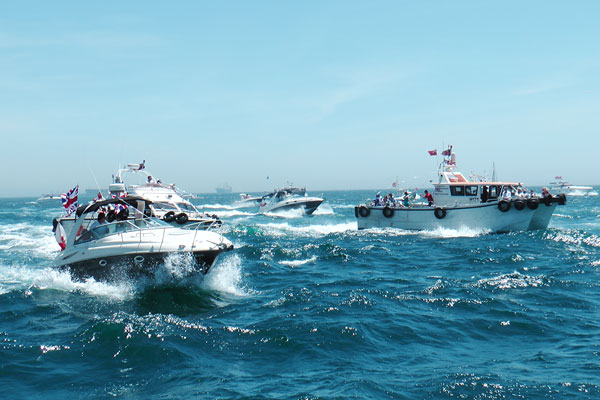 Official starter of the event, Minister for Culture Hon Steven Linares MP, enjoyed the Flotilla from onboard lead vessel and Port Authority boat the General Elliott.  He thanked Ros Astengo, Event Organiser from Ocean Village Marina, for her key role in the day’s Jubilee celebration, “The fact that we only expected about 40 boats two weeks ago and when I came in today we had reports of 116 and we reckon that about another 30-odd added on, so around 150 boats out there, is brilliant.  The River Thames Pageant was 1,000 boats and it was an organization of two years, Ocean Village organised this within a month.” 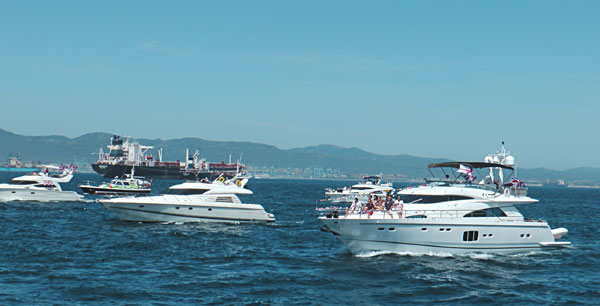 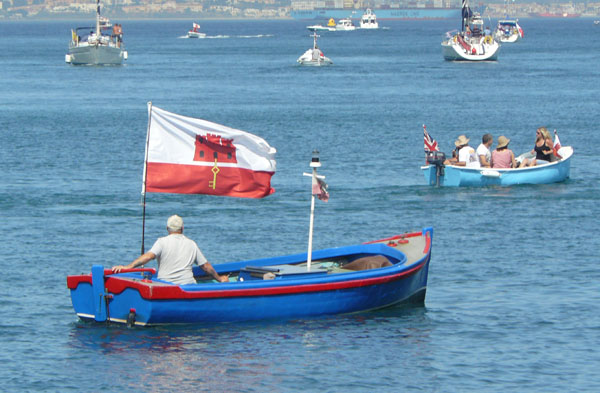 Categorised into various boat types from motor to sail, military to one-man kayaks, the Jubilee Flotilla made a two hour journey starting from Ocean Village Marina continuing around the limestone monolith to the eastern side of the runway before doing an about turn for the return leg.  Huge crowds of spectators gathered onshore waving flags and tooting horns, particularly at Europa Point lighthouse at the southernmost tip of the Rock, keen to witness a sight that had never been seen in Gibraltar before.  All participating captains, some in Beefeater uniforms and others in union jack boxer shorts, adhered to the pre-Flotilla safety briefing given by Mike Toogood from the Gibraltar Port Authority and kept to formation maintaining a safe distance between vessels.  The event passed without incident and indeed without interference from across the border into Spain.

Ros Astengo, said, “It has been a massive task to coordinate, working with the Royal Gibraltar Police and Port Authority to ensure safety at sea, and we’re delighted that all went well considering the size of the Flotilla.  It was extremely important for Ocean Village to be involved in the Jubilee celebrations because, as Gibraltar’s premier marina, we enjoy strong links with British sailors throughout the Mediterranean and the UK – many of whom were here today.  We are thrilled with the 150 boat turnout and delighted that the Flotilla has become a focal point of the weekend’s celebrations on the Rock.  I’m very grateful for the massive support we have received locally and would like to thank all those who took part or helped in any way.” 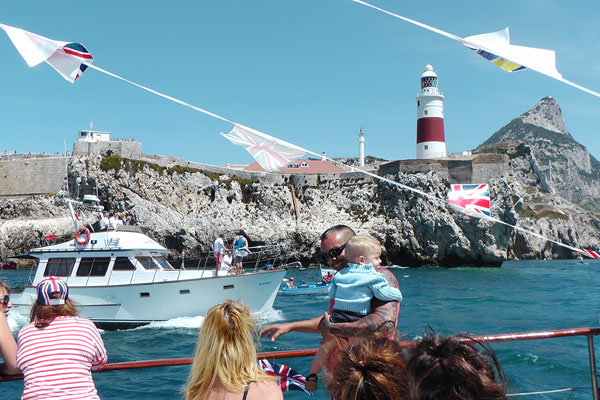 Flotilla aside, Ocean Village Marina laid on plenty of activities to ensure that everyone could make a great day, and evening, of it.  Onshore landlubbers old and young were entertained with live music, face-painting (the union jack of course being the hot favourite design) a bouncy castle and an authentic British tea party of scones, cream cakes, strawberries and lashings of hot tea in the presence of “The Queen” herself topped with diamond tiara.  The mariners, Government Ministers and invited guests also enjoyed a homecoming Champagne Party in the Marina which helped keep bodies chilled in the blazing heat. 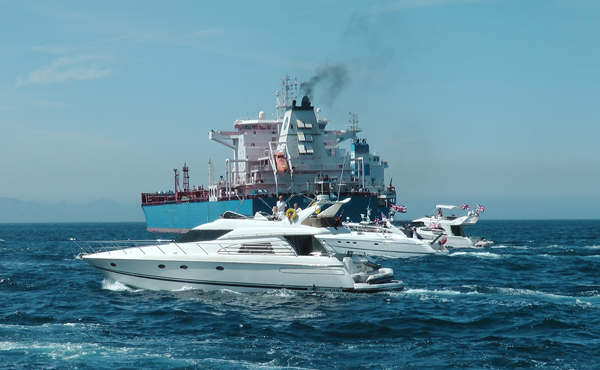 Louis Wink, Gibraltarian, owner and captain of participating vessel motoryacht Evan, said, the Flotilla “brought everyone together under one event and got people together to show our Britishness and our feelings towards the Monarchy and the Queen in particular.  It’s our history, we are British and we are often labelled as ‘more British than the British’ and because of our geographical situation it’s the one thing that unites people in Gibraltar above everything else.  It’s good that everyone joins in and everybody is together on this.” 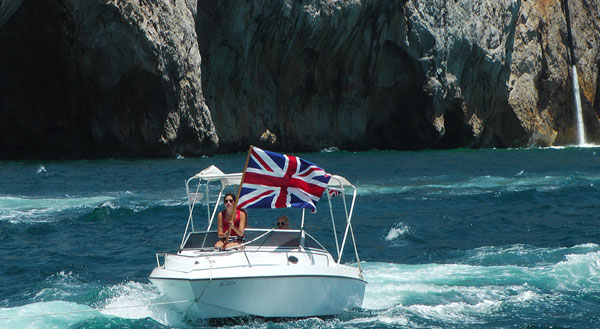 David Punch, Managing Director of event sponsors Allabroad Sailing Academy, sold out passenger tickets on their entire fleet – six boats in total.  He said, “Any opportunity to really promote Gibraltar as a sailing centre is great for us.  Just to be aware of how great a sailing location this is, I think a lot of people tend to take the place for granted.”

Dolphin World, Gibraltar’s original dolphin safari company established in 1969, also joined the parade serving champagne and strawberries to its 25 passengers whilst playing classic British tunes from sitcoms and iconic TV shows to give guests an occasion to remember.  Fiona from Dolphin World thanked the organisers saying “Ocean Village is a great place, the people who manage it are fantastic, and they always try and involve all the businesses, no matter how big or how small.  And the people of Gibraltar are lovely and they love a party.” 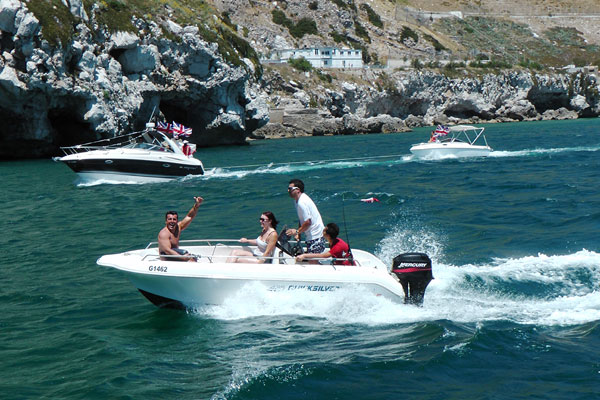 The weekend’s events drew to a close with the dramatic lighting of the beacon atop the Rock by a former Miss World, part of the global chain of celebratory beacons.