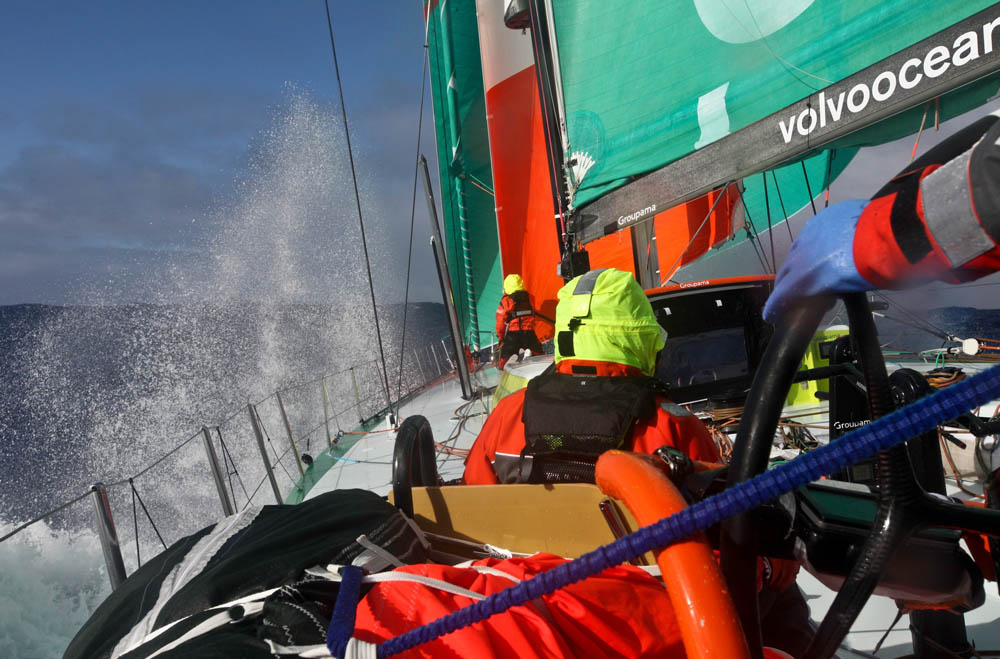 Groupama were the first team to make it round Cape Horn on Leg 5 of the Volvo Ocean Race 2011-12 on Friday, while over 1,500 nautical miles behind them Abu Dhabi Ocean Racing carried out a daring mid-sea repair after discovering damage to their hull.

“It feels like we’re leaving the the main risks behind us considering what’s happened to the other boats.

“We’re proud to be the first ones to pass. It’s a big moment for the crew.”

PUMA followed them round less than an hour later at 1352 UTC.

“It’s a very emotional time for all of us,” PUMA skipper Ken Read said.

“Everyone’s up out of their bunks, we’re all going to get up on deck and have a little celebration.”

The pair now face a tactical battle over the remaining 2,000 nm through the South Atlantic to the Leg 5 finish in Itajaí, Brazil.

Meanwhile Abu Dhabi were weighing up their options after being forced to patch up their yacht Azzam in one of the most remote parts of the world.

Ian Walker’s crew discovered delamination in a mid-section of the hull of their boat overnight and launched into a five-hour repair job that saw 30 bolts screwed through the hull to prevent further damage.

In order to carry out the repair, the crew had to slow the boat to a standstill and tilt it onto its side in heavy weather so bowman Justin Slattery, lowered overboard while safely fastened to a halyard, could tighten the bolts on the outside of the hull.

“We’ve basically joined the skins back together with a mechanical fixing,” Walker said.

“At the moment it’s been much improved, we’ve got much less noise and it seems fairly strong. We’re still taking it quite easy right now.”

Walker praised the work of his crew, who carried out the repair in 30-knot winds and big seas, around 1,700 miles from land.

“Like always, these things bring the best out in the team and everybody played a role,” he added.

It is the second major repair the Abu Dhabi crew have had to carry out in Leg 5 from Auckland, New Zealand, to Itajaí, Brazil.

The team chose to return to Auckland within hours of starting the leg to repair structural damage to a bulkhead in the bow.

Abu Dhabi were assessing their options while continuing to move out of the worst of the weather.

Team Telefónica, in third place, were en route to Ushuaia in Argentina, while CAMPER with Emirates were headed to Puerto Montt in Chile.

Both teams were forced to divert their routes to make repairs to structural damage.

“This was probably the toughest week we’ve had in the race,” Telefónica skipper Iker Martínez sad. “The wind has not stopped blowing and we had some days with huge waves that beat us mercilessly.”