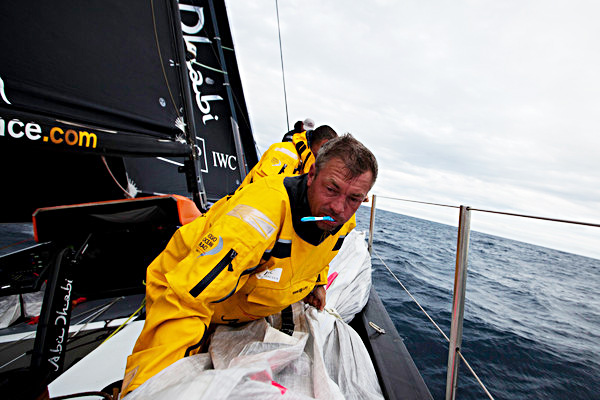 “It’s been a bizarre day of racing today,” said Ian Walker, skipper of Abu Dhabi Ocean Racing’s Azzam. “Anybody looking at our tracks on the computer must think the navigators have gone mad – or that we do not know the way to Auckland. The route we are taking is so far off the scale of any historical routes it isn’t funny.” 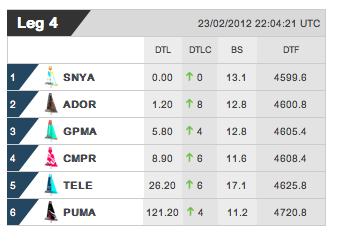 Walker is referring to the need to get east in order to gain a much faster angle when they finally turn southeast to Auckland.

Walker’s navigator Jules Salter explains that the fleet is heading northeast to pick up a surge off China which will then translate into the longed for trade winds. Salter says that earlier today, there was a barrier to this. Around the bottom of Taiwan was an old weather system, which was stuck in the way. It was possible to sail downwind on one side of it with quite good breeze, or upwind on the other side.

“The key today has been trying to get as far east or northeast as we can using that old weather system before it fully decays and then finding a really nice time to cross over it and to get into the new breeze,” Salter explained. However, it is likely to be another 20 hours or so before the fleet tacks on to port for the long haul down to New Zealand.

Once into the new breeze, there will always be one or two light spots ahead, which will give hope to those further back in the fleet and opportunities to get back in the mix. It will be interesting to see how the fleet shapes up once they reach the position where they can tack on to port and start heading southeast towards New Zealand.

Tonight at 2200 UTC, five of the six-boat fleet could be covered by a pocket handkerchief, with just 36 nautical miles (nm) lateral separation between CAMPER with Emirates Team New Zealand (Chris Nicholson/AUS) in the north from Mike Sanderson’s Team Sanya in the south.

Ken Read/USA and sixth-placed PUMA’s Mar Mostro powered by BERG, who broke away from the pack soon after leaving the Luzon Strait yesterday is now over 100 nm north of Team Sanya. Today the crew has been in sight of both Taiwan and the southernmost Japanese islands, which seemed very strange to the crew racing on a leg to Auckland, New Zealand.

Spirits are low on the overall leader, Telefónica (Iker Martínez/ESP), in fifth place. They were the only team to head south after the Luzon Strait, a move that later proved disastrous. When the door to the south closed, they cut their losses and tacked to re-join the fleet, a move that they are now paying for dearly. “It’s been a very tough day,” said João Signorini. “We haven’t really found our pace. It is very tricky here, but we are doing our best,” he said.

Abu Dhabi Ocean Racing are, however, upbeat and enjoying their spell near the top of the leader board.  “In essence, spirits are high onboard Azzam,” wrote Ian Walker earlier this evening. “This morning we were staring at big overnight losses to the fleet, and tonight we are in a solid third place. What a difference a day makes.”  At 2200 tonight, the situation had improved further as the team rose up the order to take second place.