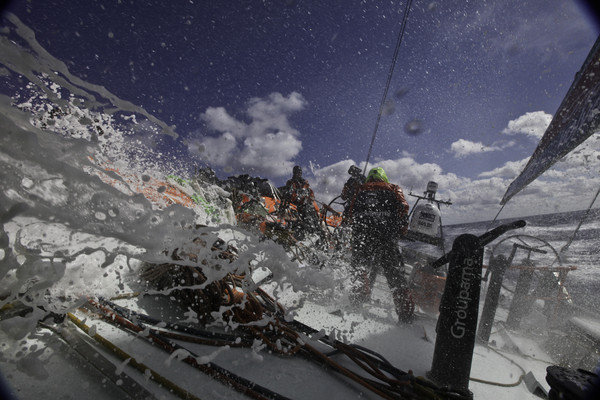 Overnight, Team Telefónica (Iker Martínez/ESP) lost their lead at 2200 UTC to PUMA’s Mar Mostro (Ken Read/USA), and today at 0700, it was the turn of CAMPER (Chris Nicholson/AUS) to top the Leg 2 leaderboard. Both boats are steadily trucking east, while elsewhere in the fleet there are some radical moves being made.

It is something of a lottery out on the Indian Ocean as, on Day 7 of this leg to Abu Dhabi, the weather Gods continue to do their best to annoy the fleet in any way they can. They are teasing the fleet with light fluky breeze interspersed with strong gusts and rain requiring constant attention to the trimming, multiple sail changes and adjustment to the angle of the canting keel, all of which is mentally and physically tiring for the crews. It is a mind-numbing situation.

“I have never sailed in a more frustrating place in my life. The weather refused to make up its mind,” says bowman of Abu Dhabi Ocean Racing’s Azzam (Ian Walker/GBR), now in fourth place.

Sixth-placed Groupama 4 is now at 39 degrees south, with a southeasterly breeze. Soon Cammas and his men will have swerve to avoid the South Indian High and race north in search of the trade winds situated between 30 and 35 degrees south.

To complicate matters, the wind Gods have decided to throw in a tropical depression forming off the coast of Madagascar which could increase the strength of the trade winds to 40 knots. This means more upwind sailing for the fleet on the eastern side, but a much wider sailing angle for Groupama 4, which could give the French team a strong advantage if the system behaves as predicted.

After several days of deliberation, Team Sanya (Mike Sanderson/NZL) finally took the radical decision to head north early to try to cross the tropical depression on the northern side, but this is risky move and the possibility of getting trapped in headwinds of up to 50 knots with no escape route is very real. It won’t be the first time that navigator Aksel Magdahl has made such a move. In the previous race, when navigating Ericsson 3, he made a brave call in the Southern Ocean, which ultimately secured the team a leg win on the longest leg of the course.