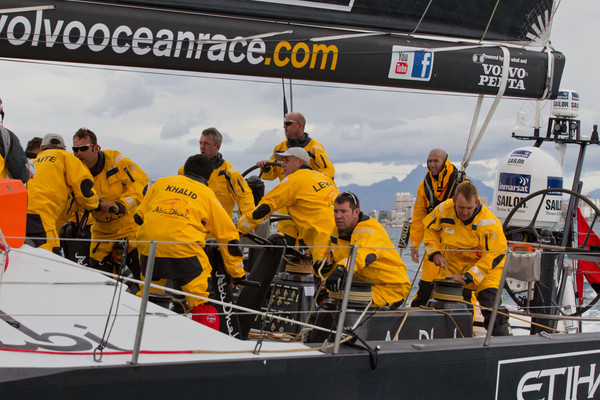 Zinedine Zidane was on board Azzam at the start of the Volvo Ocean Race on Saturday, surviving a wet and wild inshore ride before jumping off backwards into the Mediterranean and coming up smiling.

The French soccer legend arrived at Alicante Race Village on the morning of the start of Leg 1 and toured both Abu Dhabi Ocean Racing’s Azzam and the Abu Dhabi pavilion as the guest of official timekeeper IWC Schaffhausen.

Zidane, the inspiration behind France’s 1998 World Cup win, described the boats as sublime, the race as beautiful and the team areas as something out of Formula 1.

“I enjoy being here and I find it beautiful — I’m impressed,” Zidane said after his morning tour of the Abu Dhabi boat.

Zidane’s big surprise was to see the limited space the 11-man teams will have during the race around the world, on legs that will last as long as three weeks.

“I thought the boat would be bigger,” Zidane said. “I don’t know how the 11 guys on board can still stand each other at the end!

“Yet, I think it’s nice for the teams. And it’s beautiful. It’s like Formula 1 in the paddocks: I find the boats sublime.”

Zidane later joined the team for the start of Leg 1 of the Volvo Ocean Race, which began with a fast and furious race close to the shore, where 60,000 fans were gathered.

The gusting winds made the conditions testing even for the professional sailors on board but Zidane came through them unscathed and as the boat neared the end of the eight-mile inshore course the former Real Madrid and Juventus midfielder made a stylish leap off, facing backwards, before being taken back ashore.