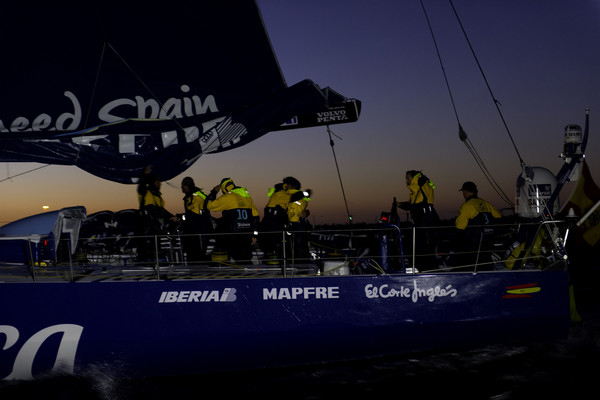 Telefónica skipper Iker Martínez and his crew stepped ashore to a summer’s evening in Cape Town and a rapturous welcome from a crowd of sailing fans, shore crew and loved ones.

“The feeling is fantastic. It’s something that you only dream of. We’ve seen what can happen and we have achieved much more than we thought we could,” said Martínez, an Olympic gold and silver medallist for Spain. 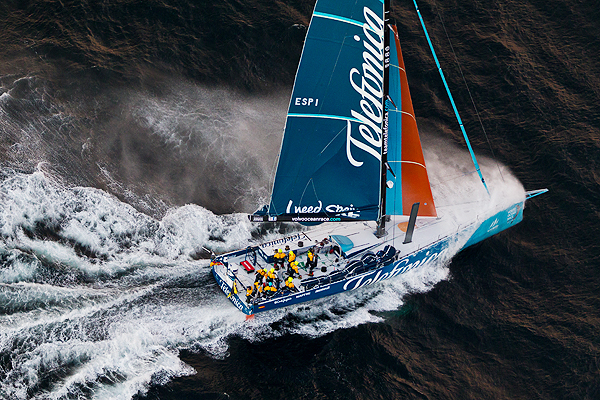 The team now lead the Volvo Ocean Race with a total of 31 points — 30 for victory in the first offshore leg and one point for coming last in the Iberdrola In-Port Race back in Alicante.  CAMPER with Emirates Team New Zealand were around 200 nm behind the winners, with an ETA of Sunday morning. Groupama sailing team were around 825 nm behind and expected in on Tuesday.

Abu Dhabi Ocean Racing, Team Sanya and PUMA Ocean Racing powered by BERG were all forced to retire from the leg and are facing a race against time to be ready for the Cape Town In-Port Race on December 10 and the start of Leg 2 to Abu Dhabi the following day.

Telefónica navigator, Andrew Cape/AUS said of the team’s success, “It’s hard to put your finger on one thing, but it comes down to solid decision-making. We were always pretty sure of where we wanted to go, that’s just my aspect of it. The guys kept the boat moving fast and everything in working order, which is massive because you don’t go anywhere with stuff breaking or if you’re not trimming fast.  The whole crew worked really hard to keep this show on the road and it has worked out really well.”

It was day four, November 8, when Telefónica first took over the lead from PUMA’s Mar Mostro (Ken Read/USA). The pair had covered each other’s move in what has turned out to be an unusual opening leg for the world’s premier ocean race. Boat-breaking conditions early on, which forced out Ian Walker and Abu Dhabi Ocean Racing’s Azzam and Mike Sanderson’s Sanya, gave way to endless upwind sailing in light airs.

As Chris Nicholson/AUS (CAMPER), Martínez and Read all decided west definitely was best in terms of position, the drag race between Telefónica and Mar Mostro began and looked set to continue throughout this, the second longest leg of course. Groupama became a lonely warrior, splitting from the pack in an unorthodox move and hugging the African coast, a tactic that put her briefly into first place.

By day seven, PUMA’s Mar Mostro and Telefónica had traded places and the following day, the fleet finally found the weather system they had been looking for and hoisted their downwind sails.

On day 11 and after 2,000 nautical miles of racing, Mar Mostro was only 7.2 nautical miles ahead of the blue boat and, as the leading pair tackled the windless Doldrums, the lead swapped regularly.

At the Equator, PUMA’s Mar Mostro and Telefónica crossed within an hour of each other and the trend continued when, on day 13, November 17, Mar Mostro led Telefónica round the Brazilian island of Fernando de Noronha by 55 minutes. But, by day 14, fortunes had changed and Telefónica had taken charge as the two yachts raced hard to reach a cold front which would catapult them into Cape Town.

Martínez said at the time, “We’re pretty close to PUMA, almost nothing between us.  It’s great to be so close – it makes it a great race.”

The crew of Telefónica had freed themselves from PUMA’s vice-like grip and stormed away, heading south to skirt the Saint Helena high-pressure system that blocked their path to the sought-after westerlies and the inevitable sleigh-ride to the finish.

On day 17, November 21, 31 nm behind Telefónica, Mar Mostro dismasted. The match race was over. PUMA limped away towards the most remote settlement on earth at Tristan da Cunha, where they await a ship to take them back to Cape Town, and the crew of Telefónica sailed their own foot perfect race to the finish.

For more information on the Volvo Ocean Race please visit:www.volvooceanrace.com