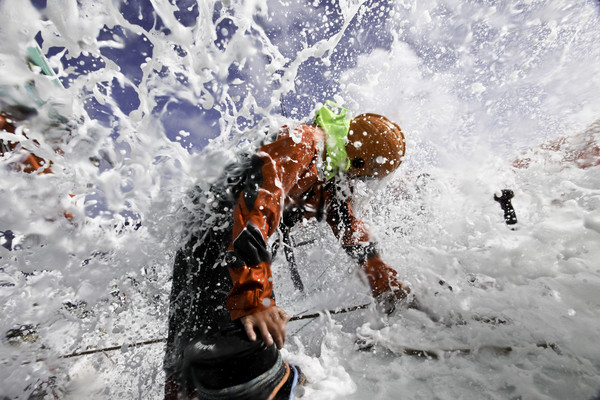 CAMPER’s bowman Mike Pammenter has sustained injuries after being thrown into the boat’s shrouds while moving forward to do a sail change.

Mike suffered a broken tooth, gash to the face and various bumps and bruises in the fall. He was stabilised immediately by onboard medic Tony Rae (Trae) and after further medical advice from Volvo Ocean Race Headquarters has received three stiches and the affected tooth area has been anesthetised.

He is alert, well and generally in as good as shape as can be expected.

Skipper Chris Nicholson says that after initially slowing down to assess and treat Mike’s injuries CAMPER is now back to full pace. 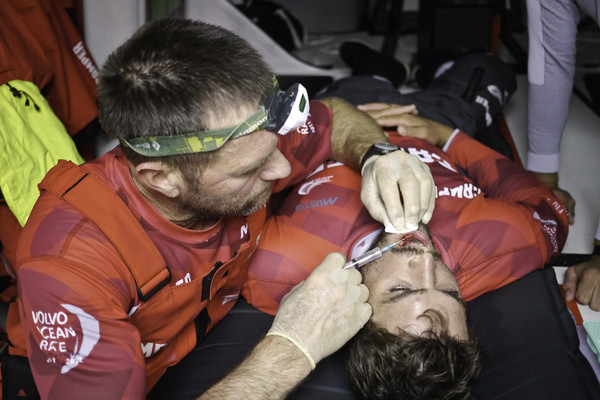 “We buttoned off and headed downwind for a while but now that Mike has been stabilised and is in ok shape we’re back into racing. Mike will have one or two watches off and then will be back into things.

“This sort of injury shows the extreme nature of this race and while we take all due care there’s still a pretty high degree of risk in pushing these boats hard in these types of conditions. That’s just part of the race – you don’t want it but you can’t avoid it.

“These boats are on the edge a bit but that’s what they’re meant to be.”

It was a dramatic few hours for the Volvo fleet with second placed boat Puma breaking their mast over the same period in the 20 to 23 knot winds.

Emirates Team New Zealand Managing Director Grant Dalton said it was reminder of the at times brutal nature of the Volvo Ocean Race.

“To lose your rig in pretty moderate conditions while in second place only five days or so out from Cape Town is really hard. I’ve been there before and I know what it feels like so my thoughts go out to the Puma guys.

“For us it looks like we’ve been lucky this time and Mike will be ok and that’s great to hear. It sounds like Trae and the other guys aboard have done a good job.

“This is a dangerous race and when you are sailing on the edge like this the unfortunate reality is that at times you will damage both boat and crew. The key thing now is that CAMPER is back in the game and heading hard for Cape Town and the finish.”

CAMPER in the latest position report at 1100h 22 November NZT has moved into second place 98 miles behind leader Telefonica averaging 19.6 knots in a 16 knot north easterly.