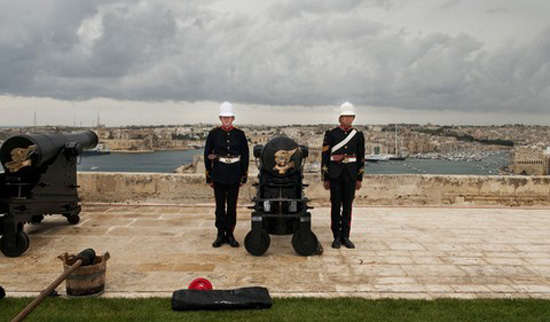 The Middle Sea Race is the flagship race of the Royal Malta Yacht Club and each year, members of the club, young and old take part in the spectacular race. First 45, Elusive St.Regis typifies the importance of this race to Maltese sailors. Elusive St.Regis skipper, Arthur Podesta is taking part in his 32nd race and his three children on board have completed over ten races each. However, three other Maltese yachts are locked in a fierce competition to win the coveted Starboard trophies, which are awarded to the best Maltese Yachts racing under both ORC and IRC and to be the first Maltese yacht to finish the race. As the fleet passed the volcanic island of Stromboli, Sandro Musu’s Grand Soleil 40, Aziza led the Maltese entries in both ORC and IRC. This will be Sandro Musus’s 8th race and he has loved the experience, as he explained “The good experiences by far exceed the bad ones, and in all honesty, any challenge still falls under the category of a good experience, it is an opportunity to learn about oneself, the team and the boat, as well as the waters you are racing in”

However, an intense battle is developing. On Monday at 1300 CEST, Jonathan Gambin and Nicky Sammut’s Dufour 44, Ton Ton Surfside was virtually neck-and-neck with Aziza, both on the water and after time correction.

Seven miles ahead of both of these yachts was, Lee Satariano and Christian Ripard’s J/133, Artie, which is favourite to be the first Maltese yacht to finish. However, Artie carries a heavier time penalty than Aziza and the highly experienced crew will be pushing as hard as they can to get further ahead.

These three yachts are expected to turn the corner at Favignana tonight and they will almost certainly be beating into big waves and approaching 20 knots of wind speed. Artie is the lightest of the three and it will be a rough and very wet ride on board, whilst Ton Ton Surfside and Aziza are heavier displacement and should handle the feisty conditions better.

It is a special honour to be the first Maltese boat to finish the Rolex Middle Sea Race, as Georges Bonello Dupuis, Commodore of the Royal Malta Yacht Club explains.

“For the entire race, all of the Maltese boats will be concentrating on crossing the line first, it is an incredible honour filled with pride and elation. All of their families will be in the yacht club, hoping that they will win. It is a great feeling to be the first home but a real welcome home party awaits them all.”