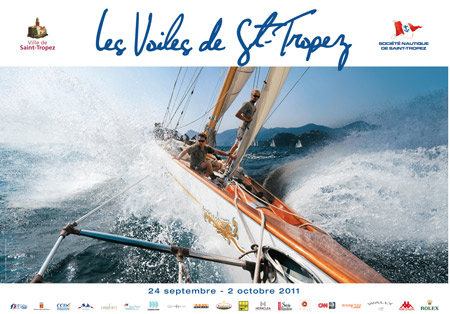 THE FINEST TRADITIONAL AND MODERN YACHTS AT LES VOILES 2011

Over four thousand crew* are preparing to do battle from 24 September at the 13th edition of Les Voiles. They will be racing aboard three hundred of the finest futuristic yachts and the most elegant traditional yachts on the planet. The event will be run in the exceptional setting of the bay of Saint Tropez, bathed in light and swept by the lovely breeze of early autumn.

The Société Nautique de Saint Tropez, which has presided over the organisation since 1999 with the close collaboration of the Town, wishes to honour the spirit of the event for this the thirtieth anniversary of the original Nioulargue: seamanship, fair play on the water and on shore, coloured by good humour and some brand new features, will all spice up what is set to
be a remarkable edition.

The breath of the Nioulargue
“We’d like everyone to remember, or learn, how the Nioulargue came about” points out André Beaufils, President of the Société Nautique, “when in 1981, Patrice de Colmont demonstrated his familiar intuition in the creation of a no stakes regatta between a group of friends who had come together for the end of the summer, prior to the following sailing season.” Initially christened the “Club 55 Cup”, the event was contested by two boats, Ikra and Pride, both of which are scheduled to race in the Var region’s port some thirty years on! From these beginnings as a duel, the event adopted the name Nioulargue. Hailing from the Provençal “Nioulargo” – literally “Offshore nest”- after an area of shallow water situated 5 miles from the bay of Pampelonne and serving as a haven for the reproduction of numerous species of Mediterranean fish. It is also very interesting to note that it was this original race between a 12mJI classic and a modern racer which coloured the Nioulargue’s character. It went on to become Les Voiles de Saint Tropez, which is synonymous with getting together boats from the latest generation and those which have written the history of yachting on the same race zone.

Modern craft: more than 50 yachts measuring over 18 metres
Thirty years on from the original event, the success of the event’s formula has been unfailing! Among the superyachts, the Wallys have become a ‘trademark’ not to be ignored at Les Voiles over the past ten years or so. These prestigious craft, commonly manoeuvred by crews of 25, were created by Luca Bassani’s team and really create a stir both in port and on the water. This year all eyes will be on Inti (24 metres) – the former Indio – a title smasher at Palma Vela, which is likely to rank as favourite in the racing at Saint Tropez. Playing opposite her will be Magic Carpet 2 (28m80) – which is competing in her last season as we await the arrival of the very first Wally Cento (100 feet) on order for next year -, the giant Esense (43m70) as well as Angel’s Share – the former Wally 130 – entirely revamped at the owner’s request and set to compete in Les Voiles in her new anthracite hull livery.

Among the most popular Maxis, the duel between Sojana (35m – Farr 115) and Rambler 100 (30m – Reichel Pugh) mid-Atlantic won’t unfortunately be echoed in Saint Tropez. Indeed the 100 footer skippered by Australian Mick Harvey unfortunately capsized mid-August, near the Fastnet Rock, having lost her keel. Peter Harrison’s Farr 115 will have to console herself by competing with the brand new Firefly, a Dutch 115 footer created by Hoek Design and built in 2011 at the Jachtbouw yard.

As regards the series boats, all the major French and overseas yards will be present at Les Voiles. Leading the way is Bénéteau, with thirty Firsts, including five First 45s of under three years of age, closely followed by Nautor Swan which is to have a new 90 footer on the start line this year in the form of Nefertiti. At Dufour meantime, the most recent craft is a French 45 footer, Cristeban. There’s also going to be some fierce battling among the Grand Soleils, X Yachts, Archambauds and Baltics, which each boast at least half a dozen entries.

Traditional craft: a record in excess of 115 boats expected
Among the traditional craft the major event in 2011 is unquestionably the arrival of Hispania. This gaff cutter features two unique qualities in that it is one of the most beautiful craft from the golden age of yachting to be designed by William Fife, as well as belonging to the ‘royal’ 15 m JI class. Built in 1909 on the order of HRH the King of Spain Alphonso XIII, this 23 metre long boat first enjoyed success during the numerous international races her owners had her compete in, whilst simultaneously enhancing the prestige of the Spanish regattas as major sights for the yachting world. However, her glorious past and her royal origins were to fade little by little, until such time as she sank into oblivion. Indeed she was used as a floating house in England for more than thirty years.
She was in a pitiful state when she was found some 15 years ago in mud flats by the historian William Collier and Jonathan Syrett of Camper and Nicholson International. Thanks to the participation of the Real Fundacion Hispania, the cutter, whose hull was buried in mud and no longer had a keel, was transported to Fairlie Restorations on the Hamble River, England, which began the complete restoration of the hull prior to its transfer to the shipyards of Majorca. As a result Hispania will be at Les Voiles this year for the very first time and she’ll complete the Carré d’Or for the 15 m JIs as she does battle with the illustrious Tuiga from the Yacht Club de Monaco, Mariska and The Lady Anne. Three of these exceptional yachts** will notably form part of the first edition of the centenarians’ race organised in collaboration with the Société Nautique de Saint Tropez and the Yacht Club de Gstaad on Thursday 29 September.

Built in 1937 from Olin Stephens plans, Manitou (18m90) is a very elegant Marconi yawl, whose claim to fame was that she was used by John F. Kennedy during his presidency. Indeed the yacht even had the title “Floating White House”. Kitted out with all the lastest technologies of the time, she enabled the President of the United States to stay in touch with land during his sails along the western seaboard. Having continued her career as a training school, the boat underwent a thorough refit in 2010 and will be making her very first appearance in Les Voiles.

Another yawl, but a very rare gaff yawl this time, will also be present in the bay. Built in 1918 at the Nielsen yard in Denmark, Runa IV (10m73) cannot deny its Viking origins. This wooden racer with its long keel was saved from destruction in 2009 by Yves Carcelle, who brought her back from San Francisco to have her entirely restored at the Guip yard in Brest. Bruno Troublé, who followed the whole project, will be her skipper for Les Voiles de Saint Tropez where the boat’s characteristic outline – bowsprit and dolphin striker – won’t go unnoticed. It may even be that Elisabeth Meyer, the American owner who drove the restoration of Endeavour, will be aboard for some of the races in Saint Tropez.

Among the ‘newcomers’ we’re also keenly awaiting Skylark (16m), an elegant yawl designed by Stephens in 1937, which is a boat restored by Tara Getty, a descendant of the Getty dynasty. Other splendid restorations by her include the motor yacht Blue Bird as well as Palynodie II (12m), one of the first mainstays in the saga of racing yachts belonging to the famous Mayor of Marseille, Gaston Defferre.

Alongside the impressive number of representatives of varying sizes and types of boats retracing the metric measurement through history – around twenty in total from 6 M to 8 M, 10 M,12 M, 15 M, 19 M and 23 M, with gaff and Bermuda rigs -, connoisseurs will appreciate the presence of one of the very pretty fleet of six 30m2 craft. Indeed these ‘little’ boats span a dozen metres and are very sleek combined with a large sail area, which makes them particularly spectacular on the race course. Also of note is the fact that Les Voiles will this year play host to a fleet of around twenty Tofinou 9m50s, the dayboats designed by Michel Joubert and built by the Latitude yard in Saint-Martin de Ré off La Rochelle. Given the sizeable fleet, they will enjoy their own courses and their own ranking.